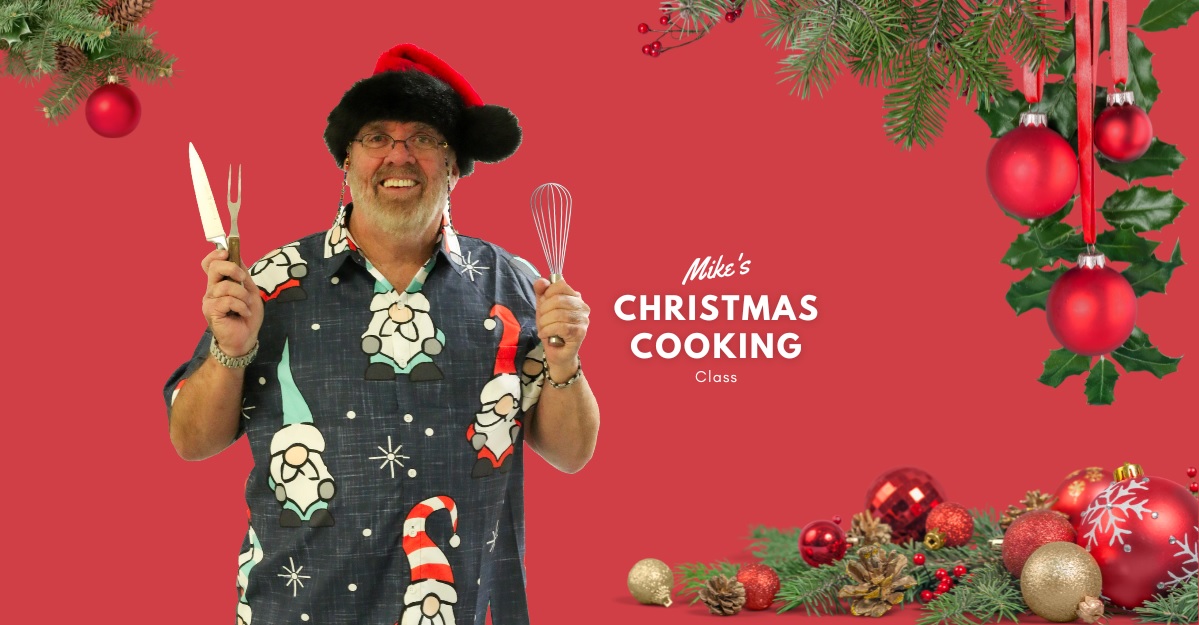 We’ve all been there. We move out of the house and quickly realize, the home cooked meal isn’t nearly as good now.

For WIZM’s Mike Hayes, he did something about it. If you haven’t figured it out yet, Hayes is obsessed with food. But that obsession didn’t come until he realized he couldn’t cook.

And how he got to a place where 36 years at WIZM will allow you to have a radio show and events centered around your passion for food, it began by having his dad talk him through how to debone a chicken over the phone.

And now, Hayes is inviting all of you to join him in the second-ever cooking class event: WIZM’s Christmas Cooking Class.

The interactive show will have a better forum for learning to cook some Christmas themed dishes than conversations with dad on the landline — and there will be no deboning chicken.

It of course features Hayes, along with Savory Creations chef Shawn McManus, and takes place from 5-7 p.m. Thursday, Dec. 1 at the Black River Neighborhood Center.

“He does classes like this one at schools,” Hayes said of McManus, “and he’s all about helping anybody get from, ‘I don’t know how to do that,’ to, ‘Wow. I’m good at it now!’”

Along with Christmas appetizer creations, the night includes dinner, recipes and prizes for the ugliest Christmas sweater.

Hayes gets his inspiration for cooking and food where most people do — his parents — though it’s a bit of a unique journey for how he got there.

The motivation, however, isn’t unique. Hayes moves out and comes to the realization, like us all, the food isn’t nearly as good as home.

“A long, long time ago I discovered that, ‘Hey, everybody around me was a really good cook and all I was good at was doing dishes,’” Hayes said. “You can only make peanut butter and jelly so many different ways before you start repeating.”

So, perhaps out of the ordinary, Hayes called his dad — not mom.

“My mom cooked,” Hayes said. “She just didn’t like it, and I didn’t learn — my sisters and I didn’t realize — that she hated to cook until much later in life. She did it so we wouldn’t starve. She was a really good cook, but she would’ve told you, ‘My favorite thing to make in the kitchen is reservations.’”

Mom cooked because dad was mostly on the road. But later in life, after Hayes moved out, he got dad on the phone and asked for his help — which is where the deboning a chicken over the landline comes in, because they lived hundreds of miles apart.

During his childhood, Hayes said dad would bring home unique cooking tools that mom would start to ask, ‘What’s that for?’ and then stop herself, because she didn’t want to know, otherwise she might be apt to use it.

“My dad loved to cook,” Hayes said. “He’d spend all day in the kitchen if he could.”

So that love for cooking was passed down to Hayes, who finagled that obsession into a profession that’s not really about cooking, but he made it so. From Taste of Home specials of the past, to the second-ever cooking school next month with McManus.

“He is very good, very easy to understand, and a ton of fun,” Hayes said of McManus. “My dad used to say that if you’re not having fun in the kitchen, you’re doing it wrong.