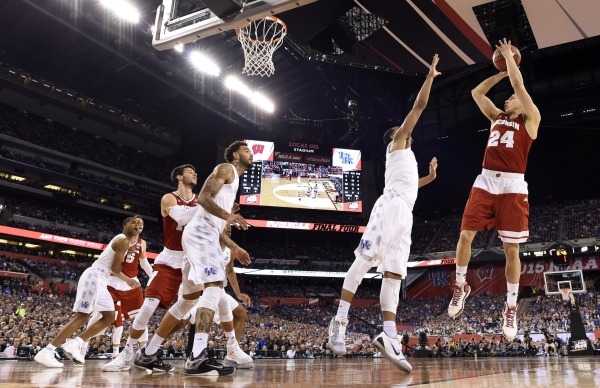 FILE - Bronson Koenig shoots against Kentucky in the 2015 Final Four.

While one La Crosse native was playing on the Kohl Center court last night for the Wisconsin Badgers, another was an honorary captain.

Bronson Koenig was honored on the court, getting a signed ball from coach Greg Gard.

The La Crosse Aquinas graduate guided the Badgers to a pair of Final Fours during his career, including taking down an undefeated Kentucky team to get to the NCAA championship.

Along with the two Final Four appearances, Koenig was also part of back-to-back Sweet 16 teams.

Meanwhile, La Crosse native Jordan Davis had the best game of his career, as the Badgers held of UW-GB for a 56-45 win.