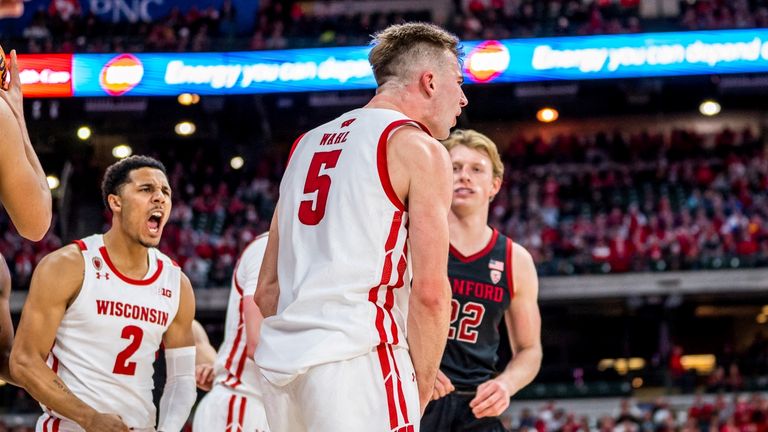 The 6-foot-4 junior guard was 4-fr-9 from the field, including 1 of 3 from deep, while adding three rebounds and a steal, as the Badgers easily won 85-59.

It was the first college basketball game at a baseball-only facility since a 2015 matchup between San Diego and San Diego State at the San Diego Padres park.

Attendance was 17,927 at the field, where the retractable roof was closed. The game featured a combination of University of Wisconsin and Milwaukee Brewers traditions.

One timeout featured a version of the sausage race that happens in the seventh inning of Brewers home games. Another had Wisconsin fans jumping along to House of Pain’s “Jump Around,” the same way they do back on campus.

The stadium was reconfigured for basketball by removing the pitcher’s mound and placing the court on the infield. About 400 bleacher seats were placed courtside, there were a few rows of chairs behind each basket and fans also filled portions of the stadium’s permanent stands.

Wisconsin led 32-20 after a first half in which Stanford missed all nine of its 3-point attempts and had nearly twice as many turnovers (12) as baskets (7).