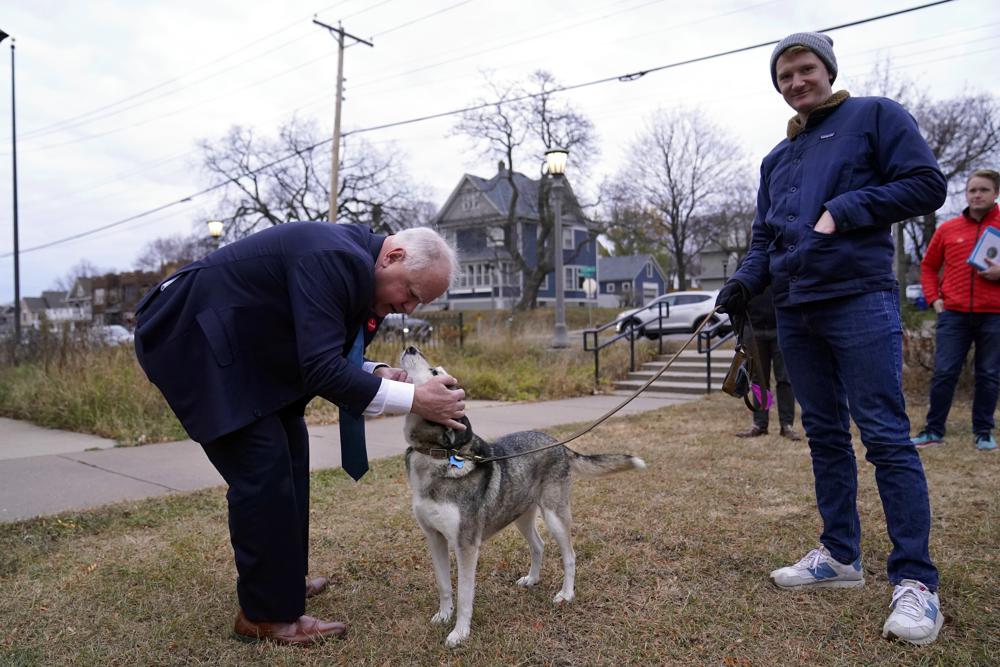 Walz led Minnesota through the COVID-19 pandemic — including lockdowns, school shutdowns and business closures. He also led the state through the unrest that followed the police killing of George Floyd in Minneapolis in 2020. He made his support for abortion rights a centerpiece of his campaign.

Jensen hammered Walz for rising crime, including failing to control damaging protests after Floyd’s death, and for what he called damaging shutdowns during the coronavirus. But he proved vulnerable on abortion, which remains legal in Minnesota. Jensen supported a complete ban early in the campaign, then softened his position after the Supreme Court overturned Roe v. Wade and after Democrats ran countless ads highlighting his stance.

“Well, Minnesota, democracy is alive and well in this state. Well done,” Walz told cheering supporters in a voice hoarse from the home stretch on the campaign trail. “Minnesotans made a conscious choice tonight. To choose a positive future, to choose one where our better days lie ahead. To choose one that rejects the negative, divisive politics and chooses the whole path of each and every one of us to be the best we possibly can.”

Jensen told supporters the election results were “disappointing” as they continued to trickle in, but did not immediately concede.

“When the night is over, who knows?” Jensen said. “Perhaps the machine, and the money, and the control of the media, might be enough one more time, for the liberal Tim Walz. We don’t know yet. We’re not done yet.”

Walz’s victory extends the Democratic Party’s 12-year grip on the governor’s office. The last time a Minnesota Republican won statewide office was in 2006, when Gov. Tim Pawlenty was reelected.

Walz, a former congressman and high school football coach, found ways to work with the divided Minnesota Legislature during his first year as governor in 2019, but his relations with the Senate GOP majority deteriorated over how he used emergency powers to impose pandemic restrictions without legislative approval. By this year’s session, Walz and House Democrats were unable to agree with GOP lawmakers over how to spend most of a $9 billion budget surplus.

Walz made his support for abortion rights a centerpiece of his campaign after the U.S. Supreme Court struck down the Roe v. Wade decision.

Jensen supported a complete abortion ban early in the race, but then softened his position after coming under fire following the high court’s ruling. He eventually said he would accept exceptions for rape, incest and the life or health of the mother. But he argued that abortion wasn’t on the ballot — something Walz strongly disputed — and sought to draw voters’ attention instead to inflation and the rise in crime that followed Floyd’s murder.

He also blamed Walz for a massive $250 million fraud in a food aid program meant to feed schoolchildren during the pandemic, saying his administration missed chances to stop the fraud far sooner.

Jensen had a reputation as a sometimes-moderate maverick from suburban Chaska during his one term in the Minnesota Senate. But he veered sharply to the right in the early days of the pandemic, not only criticizing the Walz administration’s response but also flirting with questionable treatments and the anti-vax movement.

Jensen also suggested that Democratic Secretary of State Steve Simon might be jailed for his running of the state’s election system, despite no evidence of problems with state elections.

Chuck Frid, 80, of Mendota Heights, voted early in Dakota County. A self-identified independent, Frid said he backed every Democratic candidate on his ballot, and has been voting more Democratic in recent years — and especially since the Jan. 6 attack on the U.S. Capitol by supporters of Donald Trump.

“It just really makes me nervous,” Frid, a retired salesman, said. “They say 20 to 30% of Republicans still believe the Big Lie … and I just think it’s not putting the country first.”

He also said he disagreed with Jensen’s opposition to abortion.

Erik Thorberg, 47, a Republican voter in suburban Lakeville, backed Jensen in early voting Monday. Thorberg, a project manager and a Navy veteran, said many of his friends and two of his children had to stop working when Walz ordered businesses to close during the coronavirus pandemic.

He also said Walz did “a terrible job” handling the unrest that followed George Floyd’s death.

“He let precincts burn. He told the National Guard to stand down at certain times. He let people tear down statues at the Capitol. I mean, the list goes on and on,” Thorberg said. “I just don’t think those things were right.”