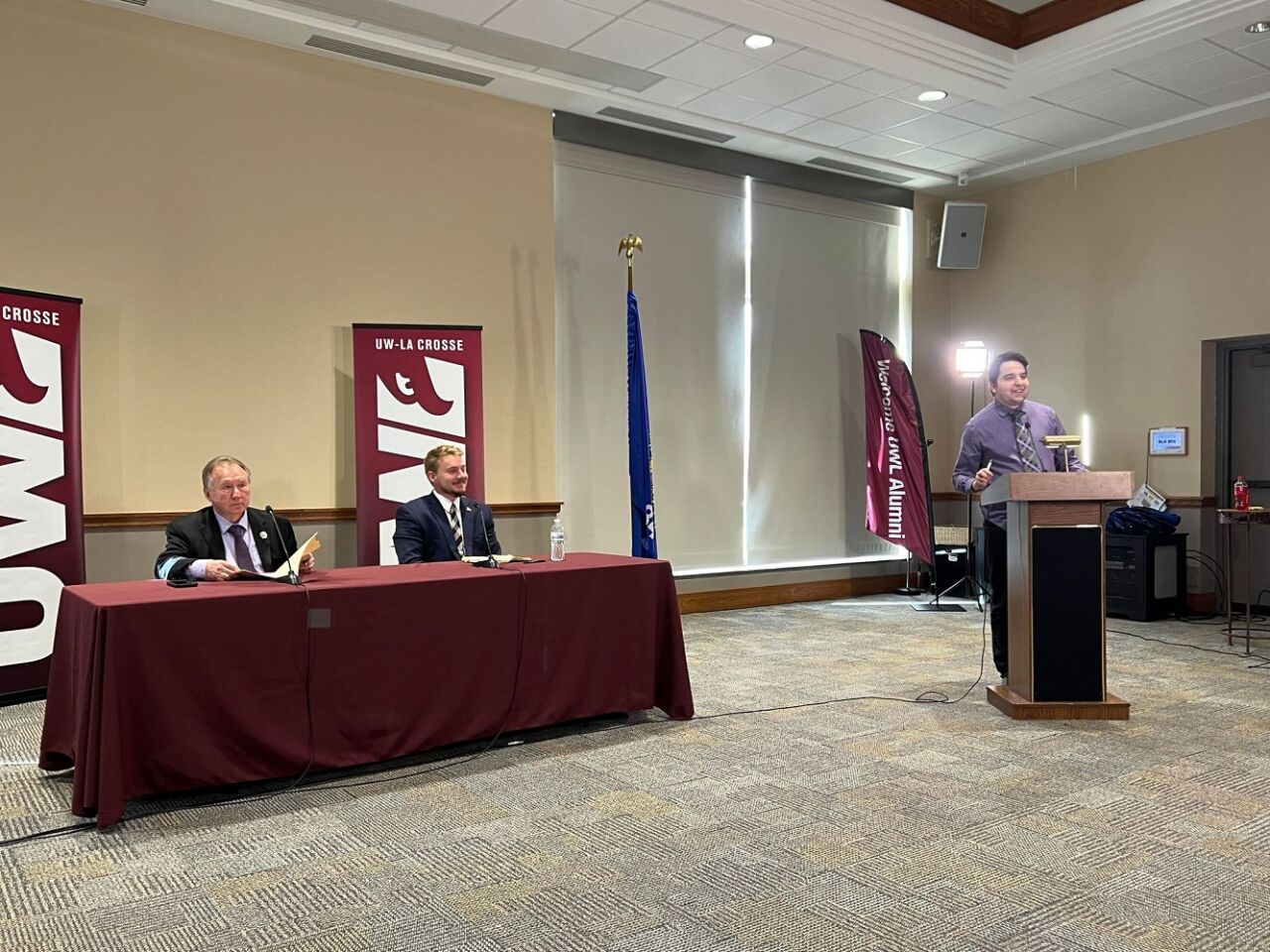 Not many Assembly districts in Wisconsin are said to be competitive this election cycle.

But in the greater La Crosse area, Assembly District 94, currently held by Democrat Steve Doyle, is thought of as one of those competitive districts.

Republican challenger Ryan Huebsch hopes to defeat Doyle, who has held the position since 2011.

The two recently took part in a debate at UW-La Crosse, where local media, including myself, asked the candidates questions ranging from school funding to abortion access to the $4.3 billion budget surplus, among other things. Oh, and the debate ended with the “say something nice about your opponent” request.

On abortion, the two clashed.

To begin, they parroted their party’s stances — Doyle wants to go back to Roe v. Wade standards, while Huebsch would like to update Wisconsin’s 1849 law that bans all abortions except to save the life of the mother, and add the qualifiers to allow if a person is raped or it’s a case of incest.

But referencing back to the question is when the two went back and forth a bit.

“Who goes to their doctor and says, ‘You’ve said that I’m gonna have a girl, so I want an abortion.’ I mean, you just don’t see that,” Doyle said. “What he’s talking about, and these are those gotcha bills that they bring up in Madison all the time, that just gets so frustrating.

“Like, you know, should we outlaw gender selection abortion? Well, it sounds horrible. Or should we — partial birth abortion was a big thing a long time ago. That is just nonsense. It’s total BS. I support Roe versus Wade. This other collateral stuff, that is just designed to inflame things, is just totally out of line.”

On funding education, two schools in the 94th Assembly District are asking taxpayers for $75 million — Holmen and Onalaska. Onalaska has another operating budget referendum question on the ballot — something Superintendent Todd Antony noted on La Crosse Talk PM this week that has been a recurring request of taxpayers since 2006 to essentially keep the school running.

Doyle said there are extenuating circumstances that call for schools requesting more money from taxpayers, via referendum, like a new gymnasium, but was displeased with how the state is funding education.

“Right now we have two problems with the school funding system,” Doyle said. “No. 1 is the school funding formula is a mess and that needs to be revamped. Schools that are either plateauing or declining in enrollment are being essentially penalized for having fewer students, meaning that they’re running into a situation of a lot less resources. But beyond that, the state really has an obligation to make sure that we don’t get to the point where schools have to go to the voters to ask for the day-to-day operations.

“The state needs to continue to meet its obligation that we promised our school districts a number of years ago that we would fund ⅔ of the cost of education. We should not put that on the backs of the property taxpayers. The state is in the better position to fund that.

Huebsch, for the most part, thought the status quo is fine. He said a majority of property taxes go to education and that would continue to be a top priority for him, and referenced a change back in the 1990s.

“We need to remember why we put this referendum bill in place, I think it was ’95,” Huebsch said. “We need to remember the property taxes in the state of Wisconsin were record high, and they were even increasing 9.5, maybe even 10% each year. We needed to put this in place to make sure we controlled that.

“Now, if communities want to increase funding and the schools want to ask their communities whether they want to spend more money and raise taxes, they have the ability to do that,” Huebsch said. “And I think it’s working.”

Later, after a question about funding in terms of “school safety,” Huebsch said the state should be allocating more money for that. Following up, however, asked if he thought there was a conflict in schools asking taxpayers via referendum for funding but also the state should be increasing money for other updates, he again, thought the way it’s being done now is working.

“I would say yes to both,” he said. “The operating budgets, yeah, I think that we should be working through that system, but also an increase in education and making sure that those funds come from the state, as well. I think there’s nothing wrong with throwing more money, coming from both ways, a referendum and from the state.”

The debate ended with the “say something nice” request, which led to some comical answers (at 53:35 in the video above).