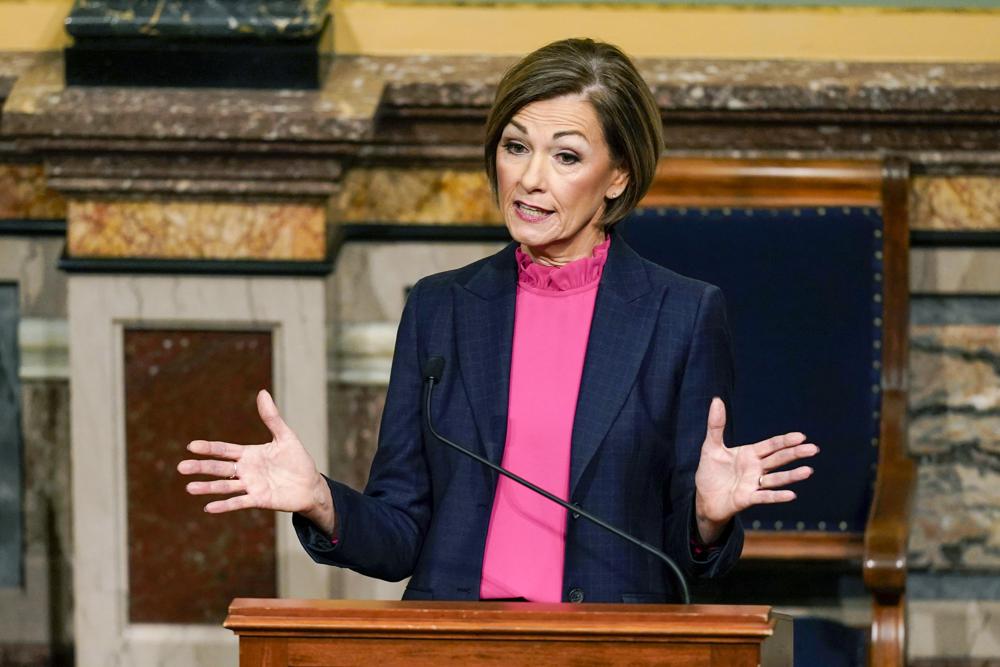 DES MOINES, Iowa (AP) — An Iowa judge should allow a law passed in 2018 that bans most abortions to take effect, three years after the measure was ruled unconstitutional, lawyers for Gov. Kim Reynolds argued Friday.

Chris Schandevel, a lawyer for the Republican governor, said Judge Celene Gogerty should set aside a 2019 permanent injunction that prevented Iowa from enforcing a law that would block abortions once cardiac activity can be detected. That is usually around six weeks of pregnancy and before many women know they’re pregnant.

Schandevel said the injunction rests entirely on an Iowa Supreme Court 2018 decision that guaranteed the right to an abortion under the Iowa Constitution and cases decided by the U.S. Supreme Court in 1992 and 1973 that established abortion rights nationally.

All three cases were overruled this year by more conservative courts and given that, Reynolds’ lawyers argued the judge should reverse the injunction and let the 2018 law take effect.

“It would be inequitable to prevent the people of Iowa to have their voices heard through a validly enacted law, enacted as recently as 2018,” he said.

Rita Bettis Austen, a lawyer with the American Civil Liberties Union of Iowa, countered that there is no precedent or legal support in Iowa for a judge to reverse a final judgment entered three years ago,

“This case is closed,” said Bettis Austen, who is representing Planned Parenthood, the state’s leading abortion provider, which challenged the law in court. “Iowa rules of civil procedure clearly govern this type of motion.”

She said the rules only allow a court to vacate a final judgement within a year and do not allow such a reversal for a change in law.

The judge said she would issue a ruling soon.

The case should at least in the short term decide whether most abortions remain legal in Iowa. Reynolds, who is running for a second term as governor, opted for the court strategy instead of attempting to pass a law banning abortions in the midst of the midterm elections.

A Des Moines Register/Mediacom Iowa Poll released earlier this month showed that 61% of Iowans believe abortion should be legal in most or all cases. The poll had a margin of error of plus or minus 3.5 percentage points.

During the hearing, Schandevel said courts have an inherent authority over their own injunctions and can reverse them regardless of how long ago they were decided.

Lawyers for both sides also argued about whether the law remains constitutional under Iowa’s current legal status.

The Iowa Supreme Court, in its June decision overturning the state constitutional right to an abortion granted four years ago, did not decide on the level of scrutiny that judges must use to weigh new abortion bans. Instead, the court left that issue to be further considered.

Since the 2018 decision granting Iowans a constitutional right to an abortion, Iowa courts have held abortion restrictions to the highest level of strict scrutiny, which requires laws to be narrowly tailored to fulfill a compelling governmental interest.

With that constitutional right struck down, Bettis Austen argued the undue burden level of scrutiny remains in Iowa until the courts change it. She noted that the Iowa Supreme Court has previously said bans on abortion early in pregnancy, including six-week bans, could not survive the undue burden test.

Schandevel said it is appropriate for the judge to reject the undue burden test and instead analyze the law using rational basis review. That is the lowest level of court scrutiny that allows most laws to survive legal challenges.

Under this test lawmakers need only to show they have a legitimate state interest in passing a law and that there is a rational connection between the law and its intended goals. Many courts have upheld abortion restrictions under the rational basis test.

The abortion law approved by lawmakers and signed by Reynolds requires providers to perform tests to detect a fetal “heartbeat” — which usually occurs at about six weeks after a woman’s last menstrual period — with exceptions for medical emergencies, rape and incest. Embryos don’t have hearts at this gestational stage, so an ultrasound actually measures electrical impulses, not a true heartbeat, providers say.

Any decision Gogerty makes is likely to be appealed.

Twelve states currently ban abortion at conception. In Wisconsin, clinics have stopped providing abortions though there is a dispute over whether a ban is in effect.

Georgia currently enforces a six-week ban similar to what Iowa would have if allowed by the courts. Kentucky, Louisiana, North Dakota and Oklahoma have six-week bans that have been prohibited from enforcement by court orders.