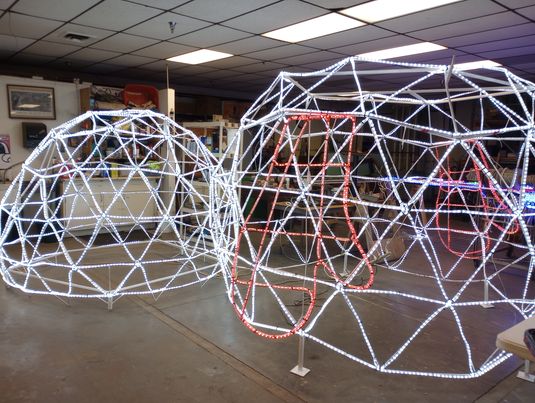 A year after a giant wind storm ended La Crosse’s Rotary Lights early, the nonprofit is getting ready to install the decorations into Riverside Park again.

This year it will again feature millions of Christmas lights and many special displays along the riverfront, but traffic to get into the park will change, as will the food drive.

Rotary this year is giving people more chances to donate food to area pantries, if the lines to get into Riverside Park are too long.

Organizers are starting an external food drive at several local employers. Those donations will be accepted at 36 different locations during the holiday season.

Anne Paape from the Great Rivers United Way pointed out during a news conference Thursday that Rotary has brought in 4.8 million food items since 1995.

“All that food is distributed by volunteers to 14 area food pantries, big and small, all over the Coulee Region,” Paape said.

Visitors to Rotary Lights will also have a new route to drive through the display. During this year’s holiday display, you won’t be able to drive south onto 2nd Street, and then directly onto State. Cars will be detoured farther south, and then will have to loop to the north. Assistant police chief Jason Melby says that should reduce the long lines of cars.

“They are getting more and more and more traffic, and the traffic continues to back up to the north, down the causeway, to the point where it’s becoming significant traffic disruptions,” Melby said. “We have traffic backed up all the way almost to Sloopy’s on the north side, when we have a busy night.”