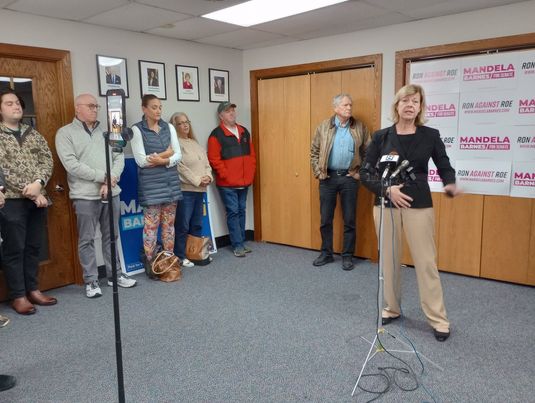 “Ron against Roe” has become a battle cry for Wisconsin Democrats, leading up to the fall election for U.S. Senate.

“Ron” is Republican Senator Ron Johnson, seeking a third term.  “Roe” is the Roe versus Wade ruling on abortion, overturned this summer by the Supreme Court.

On Thursday, the state’s other U.S. Senator, Democrat Tammy Baldwin, came to La Crosse, speaking out against Johnson’s support of laws against abortion.

“It’s so callous of the Republicans in Congress, celebrating this decision (striking down Roe),” said Baldwin, “rather than understanding that it has brought women back in this country, eliminated freedoms that we’ve had for 50 years.”

Baldwin says Johnson has favored nationwide limits on abortion, which differs from his claim that the issue should be left to the states.

Baldwin, whose Senate seat isn’t on the ballot again until 2024, told local Democrats that she wants Barnes as a Senate partner in Washington.

Barnes and Johnson met Thursday night in their second and final debate before the election.