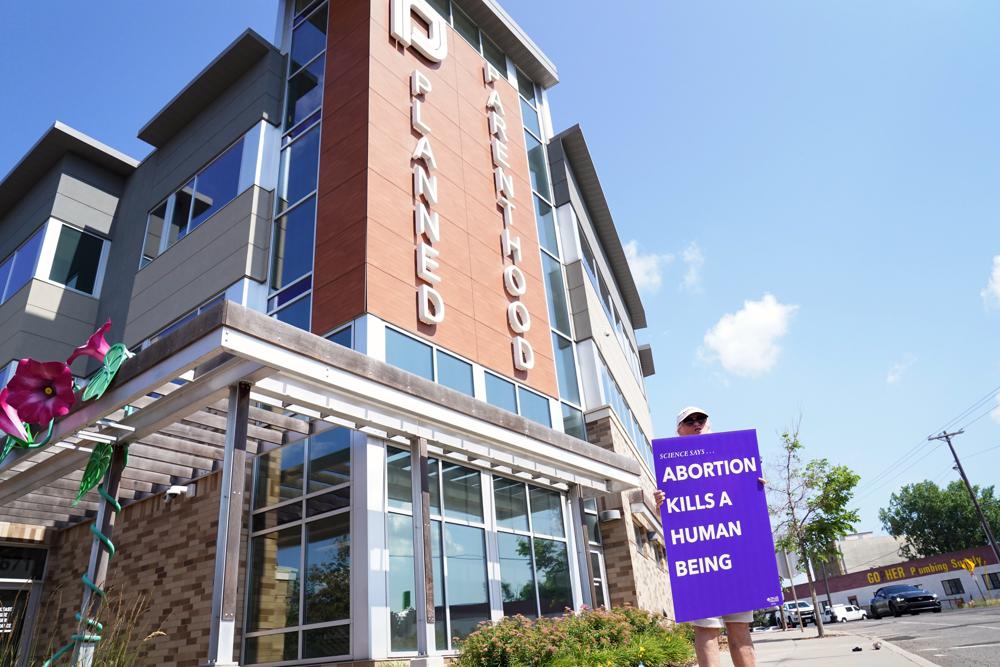 FILE - A protester demonstrates in front of a Planned Parenthood on July 12, 2022, in Saint Paul, Minn. A Minnesota judge who struck down key restrictions on abortion across the state has rejected a bid, Tuesday, Sept. 6, 2022, by a county prosecutor who hopes to step in and appeal his ruling. (AP Photo/Abbie Parr, File)

MINNEAPOLIS (AP) — A Minnesota judge who struck down key restrictions on abortion in the state has rejected a bid by a county prosecutor who hopes to appeal the ruling.

Earlier in July, Gilligan threw out a series of laws enacted over the years, including a mandatory 24-hour waiting period, a requirement that both parents be notified before a minor can get an abortion, and a rule that only physicians can perform abortions. His ruling reinforced Minnesota’s status as an island of legal abortion in the Upper Midwest following the U.S. Supreme Court decision striking down its landmark Roe v. Wade ruling, which legalized abortion nationwide.

In deciding not to appeal, Ellison, a Democrat who supports abortion rights, said his office had met its obligation to defend the statutory restrictions. He said the state had already spent enough time and money on the case and was unlikely to win an appeal.

In his latest ruling, Gilligan said Franzese waited too long to intervene in the lawsuit, which was filed by abortion rights advocates in 2019. He also said Franzese failed to demonstrate that he had sufficient legal interest in the case to meet the requirements to intervene, and failed to demonstrate that the attorney general’s office inadequately defended the challenged statutes.

“The State should have the ability to speak with one voice and make litigation or public policy decisions without the threat of intervention by county attorneys like Franzese who may disagree with those decisions,” Gilligan wrote.

Franzese’s legal team from the conservative Thomas More Society argued that he was entitled to intervene because he was responsible for enforcing abortion laws in his western Minnesota county, and that he needed clarity from the appellate courts on whether he should follow Gilligan’s ruling.

The judge disputed that, noting that Traverse is the state’s least populous county, no resident there has had an abortion in the last four years and the county has no abortion providers.

Franzese and his attorneys did not immediately return messages seeking comment Wednesday, nor did the attorney general’s office.

But Jess Braverman, legal director for Gender Justice, which represents the abortion rights supporters who sued to overturn Minnesota’s restrictions, said she would be surprised if Franzese’s team doesn’t appeal. The judge’s latest ruling means his previous decision expanding access to abortion stands “unless and until the appeals court does something different,” she said.