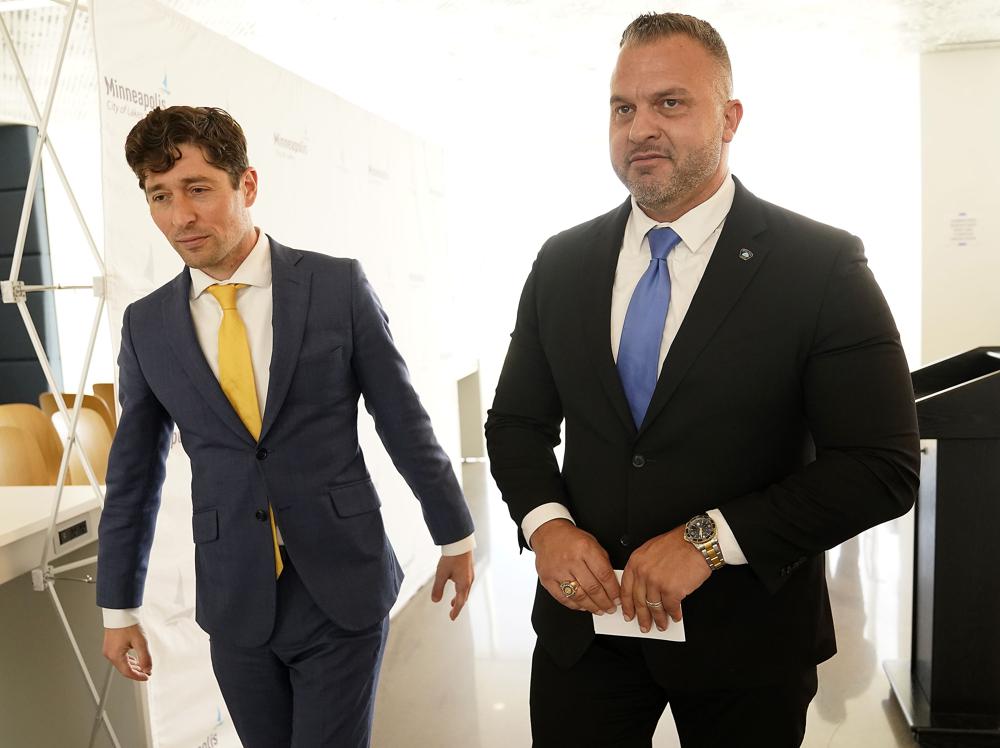 MINNEAPOLIS (AP) — Minneapolis Mayor Jacob Frey said Thursday that he is nominating a former public safety director from Newark, New Jersey, as his top pick for the city’s next police chief, at a time when the department is struggling with depleted staffing and the uncertainty of an ongoing federal investigation following the killing of George Floyd.

If confirmed by the City Council, Brian O’Hara, deputy mayor of Newark, would be taking over a department that some city leaders and community members had sought to abolish in recent years, and he would lead the agency through court-ordered changes that are expected as the result of the Department of Justice’s ongoing probe into policing practices.

“What we heard loud and clear is that people wanted a changemaker,” Frey said. “They wanted a reform-minded candidate that would both be accountable to the city of Minneapolis and our residents and also able to drive down crime in a serious way. … Minneapolis has been asking for change, and Brian O’Hara, the deputy mayor, is answering that call.”

O’Hara said Thursday that he will work toward driving down gun violence, building up ranks in the police department, and working with the community “to heal the heart of this great city.”

O’Hara said he plans to build a department that is so good that people of all races and backgrounds will want to be part of it.

“It should be clear by now to all that the idea that policing can simply go away, would be abolished, is just unrealistic. The problem of serious street crime is urgent and our communities demand and deserve good police to deal with that urgent need,” he said, later adding: “To those who are critical of policing and of this agency. I ask that you give us a chance.”

Frey intends to submit O’Hara’s name to the full City Council next week to begin the confirmation process.

Nekima Levy Armstrong, a civil rights attorney and executive director of the Wayfinder Foundation, said the city’s decision to seek a police chief from outside was a good one.

Levy Armstrong, who was co-chair of the city’s Community Safety Work Group, said her group stressed a need for a culture shift within the department, something she says would have been difficult if the new chief came from within.

“They definitely have a chance for a fresh start,” Levy Armstrong said. However, she added: “In light of everything that our community has endured in recent years, but specifically since the killing of George Floyd, the new police chief will have to go the extra mile to build relationships within our community and to help shift the perception of the Minneapolis Police Department.”

Minneapolis has been at the center of calls for changes in policing since the May 2020 killing of Floyd, whose death under an officer’s knee led to nationwide demands for racial justice and an end to police brutality.

Calls to abolish the department or dismantle and replace it with a new department of public safety were rejected by voters in the city last year.

The city is also under a federal investigation into its policing practices, and it is expected that court-enforced changes will be ordered through a consent decree.

Minneapolis is currently working with the state Department of Human Rights on a similar process, after an investigation by that agency found that the police department has engaged in a pattern of race discrimination for at least the past decade.

O’Hara has overseen such change before, after the Department of Justice found that the Newark Police Department had engaged in a pattern and practice of unconstitutional policing.

From 2017 through 2020, O’Hara was the point person dealing with the consent decree process, working as a liaison between the department and federal authorities to ensure that a 2016 consent decree was implemented and that the Newark department was in compliance with efforts designed to change the agency’s culture.

From there, he became deputy chief of Newark’s accountability, engagement and oversight bureau, where he promoted accountability within the department. In 2021, he was appointed as the Public Safety Director for Newark overseeing more than 1,960 employees, including 996 sworn police officers, 611 firefighters, and 346 civilians, and a budget that exceeded $200 million. He currently serves as Newark’s deputy mayor.

Emma Pederson, a volunteer with Communities United Against Police Brutality, said Minneapolis is nuanced and residents have many different opinions. Pederson said she doesn’t think O’Hara will be widely accepted as a nominee, but that’s OK.

“One of the things that will work well in the city is that he’s a good communicator and he’s very genuine,” she said, adding that he’s responsive and will be able to listen to people with different opinions.

Pederson served on the search committee for a new chief as a representative of Minneapolis Youth Congress. She said she was optimistic about O’Hara and liked his background, specifically his work in implementing the consent decree in Newark.

“His experience with that and also his experience with accountability in the Newark Police Department was very appealing,” Pederson said. She added that she also liked his strategies for ensuring that police officers represent the community they serve, and she’s looking forward to seeing how he addresses diversity in police recruitment.

“The true test of how he will do in this job will be once things get going, the programs he implements, how he addresses accountability and discipline,” she said. “I’d like to see him in action … before I have any definitive opinions about him.”