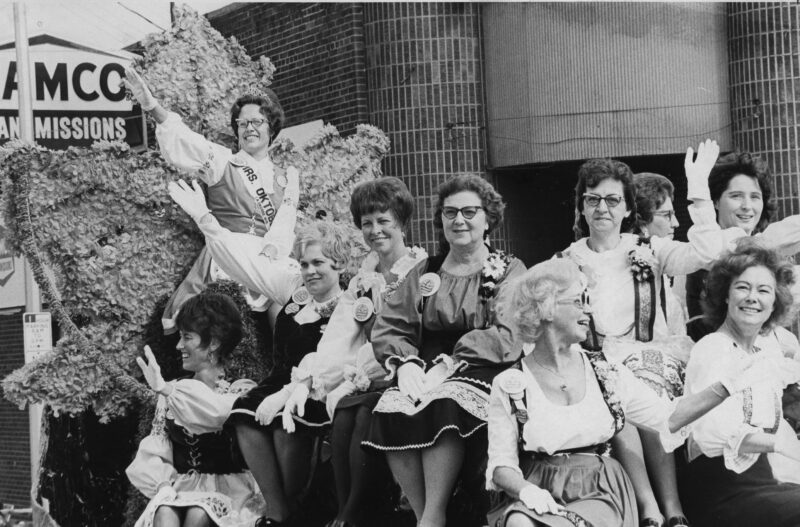 FILE - Pictured above is Mrs. Oktoberfest 1971 riding with other nominees of the competition. (PHOTO: Oktoberfestusa.com)

The origins of the Festmaster for La Crosse’s Oktoberfest is a pretty simple story.

The inception and evolution of Mrs. Oktoberfest in the city is a much more interesting one.

The 2001 Oktoberfest Board President and 2016 Parade Marshall, Quarberg was on La Crosse Talk PM this week to talk about some of the peculiar aspects of fest, including how we got a Mrs. O.

Oktoberfest in La Crosse was devised by four golfing buddies and business owners, who cherry picked all the best things from surrounding festivals.

It wasn’t, however, until 1968 that we had a female lead in royalty to offset the Festmaster.

“They’ve done that by introducing the Mrs. Oktoberfest and that was done in 1968, although it was a little bit different back then,” Quarberg said.

And, by different, Quarberg means, if we selected Mrs. Oktoberfest like we did with a contest beginning in 1968, we might have a little different kind of parade running through town.

“Well, back in ’68, it was based on homemaking skills, participation in church, school and civic activities, poise and personality, cooking, special talents and hobbies,” Quarberg said. “Those were the criteria for Mrs. Oktoberfest.”

That criteria changed six years later in 1974, when Mrs. O. was nominated by area residents and picked by a selection committee, as it still is today.

“I know a number of Mrs. Oktoberfests who said, ‘If they had those rules, I wouldn’t be in it,'” Quarberg said.