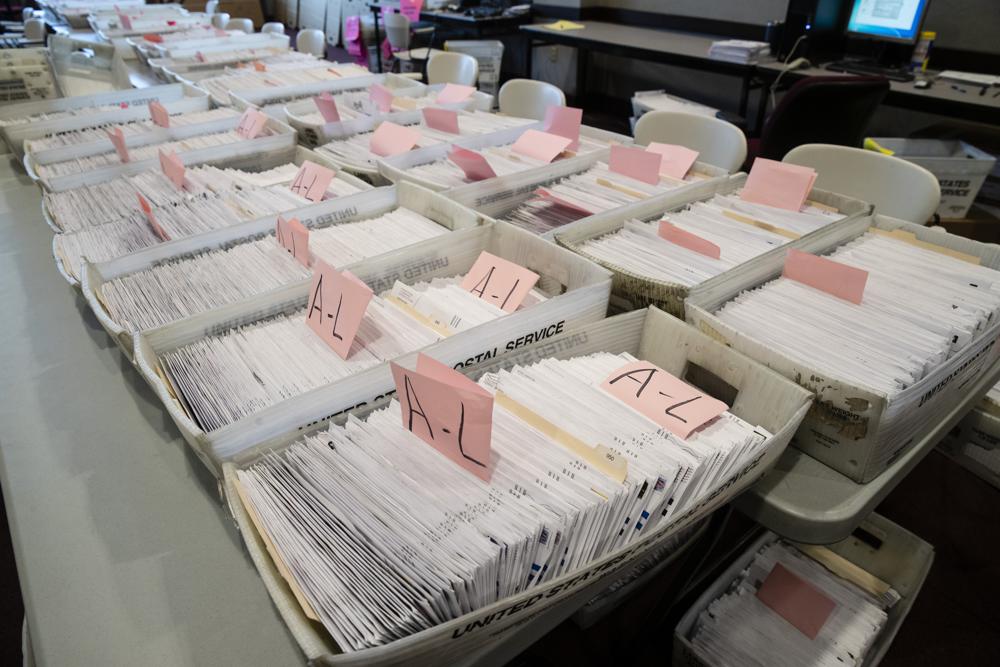 FILE - Processed mail-in ballots are seen at the Chester County Voter Services office in West Chester, Pa., prior to the primary election, May 28, 2020. State laws in the crucial battleground states of Pennsylvania, Michigan and Wisconsin force most mail-in ballots to be processed and counted after Election Day, sometimes stretching the process by a week or more. That lag time in getting results opens the door to lies and misinformation that can sow distrust about the eventual outcome in close races.(AP Photo/Matt Rourke, File)

HARRISBURG, Pa. (AP) — Former President Donald Trump and his allies seized on the drawn-out processing and counting in Pennsylvania during the 2020 election to fuel his false claims that fraud cost him victory in the battleground state.

Election officials worry that a replay could be on the horizon for November’s midterm elections, with high-stakes races on the state’s ballot for governor and U.S. Senate.

And it’s not just Pennsylvania. Michigan and Wisconsin are other crucial swing states that allow no-excuse mail-in ballots but give local election offices no time before Election Day to process them.

Election workers’ inability to do that work ahead of time means many of the mailed ballots may not get counted on Election Day, delaying results in tight races and leaving a gaping hole for misinformation and lies to flood the public space.

“That time between the polls closing on election night and the last vote being counted is really being exploited by people who want to undermine confidence in the process,” said Al Schmidt, a Philadelphia election commissioner during the 2020 presidential election who is now president and CEO of the good-government group Committee of Seventy.

The first step in processing mailed ballots, or pre-canvassing, is a routine but crucial administrative task that allows election workers to verify voters’ signatures and addresses, or spot problems that could be fixed by voters. Once ballots are deemed valid, they are removed from their envelopes — another time-consuming task — so they are ready to be counted on Election Day.

Not in Michigan, Pennsylvania and Wisconsin, vote-count outliers. Thirty-eight other states — including Republican-controlled ones such as Florida, Georgia and Texas — allow mailed ballots to be processed before Election Day, according to the National Conference of State Legislatures. Florida Gov. Ron DeSantis, a Republican, even brags about producing results on election night — a pointed criticism he made during a recent stop in Pennsylvania.

For the three critical battleground states, such objections fall flat. Efforts since 2020 to give local election workers more time before Election Day to process mailed ballots have died in Republican-controlled legislatures.

Instead, Republicans in those states have sought to tighten restrictions on voting by mail — provisions vetoed by Democratic governors.

“Counting the ballots should be driven by security, not speed,” Wisconsin state Rep. Janel Brandtjen, a Republican, said earlier this year as lawmakers were considering legislation on the issue. “Why would we want to give bad actors the chance to see ballots prior to Election Day?”

Republicans helped kill a bipartisan bill that would have allowed more time for processing mailed ballots in Wisconsin amid claims that it would give partisans more time to cheat or leak vote counts early — another unfounded conspiracy theory promoted as a way to explain Trump’s loss.

Like Pennsylvania, election workers in Michigan and Wisconsin must wait until Election Day to start the pre-canvassing of mailed ballots.

For now, in Wisconsin and Pennsylvania, requests for absentee ballots are running below 2020′s rate, relieving some of the burden on local election offices.

Still, Claire Woodall-Vogg, executive director of the Milwaukee Election Commission, said it’s “a total guess” when counting will finish in Wisconsin’s most populous county. She hopes it will wrap up by 11 p.m. on election night. A late rush of dropped-off ballots — as happened in 2020 — isn’t expected this year, she said, because courts banned the use of drop boxes.

In Michigan in 2020, lawmakers agreed to give clerks in more populous cities and towns 10 hours on the day before Election Day to process mailed ballots. Clerks unsuccessfully sought a similar provision for this year. The Michigan Secretary of State’s office said it was too early to estimate how many absentee ballots might be cast or how long it will take to process them.

The Republicans who control the Pennsylvania Legislature have refused to allow early processing of mailed ballots unless it comes packaged with provisions Democrats don’t want, such as banning drop boxes and expanding voter identification requirements.

County election officials say they are grateful the state approved $45 million in election administration grants to help them buy ballot processing equipment and pay for workers to help. But they still face the work of processing well over 1 million mailed ballots just as they are running the November election. A number of them do not expect to finish processing mailed ballots until at least the day after the election — even after working through the night.

“Once a ballot is opened, you remove the outside envelope from the ballot, you remove any ability to question anything in that election system,” said Republican state Rep. Seth Grove. “So you have to guard the front end of it a lot better.”

Those who advocate for earlier processing say observers can watch the pre-canvassing of mailed ballots, increasing transparency, and note that it is allowed by many other states.

“If people want to observe the process,” said Lee Soltysiak, the chief operating officer of Montgomery County in Pennsylvania, “they’re more likely to do it at 3 p.m. and not 3 a.m.”

All three states flipped to support Democrat Joe Biden in the 2020 presidential election and are still being buffeted by conspiracy theories about Trump’s loss.

Among those is that election workers falsified ballots in the middle of the night in Philadelphia, Detroit, Milwaukee and other Democratic-leaning cities across battleground states lost by Trump, despite no such evidence emerging for nearly two years since the election.

Death threats to election officials followed the arguing, as did a flurry of litigation designed to keep Trump in office. In the middle of the counting, two men inspired by Trump’s election lies and armed with guns drove from Virginia to where ballots were being tallied in Philadelphia.

Trump continues to peddle the conspiracy theories, repeating this month during a rally in Wilkes-Barre that Pennsylvania’s vote in 2020 was “a rigged election.”

Fearing a repeat of the false claims from two years ago, Democrats in the Pennsylvania Legislature continued to push Republicans to bring up a pre-canvassing bill — without any poison pills — for a vote.

“That bill will not run,” said Democratic state Rep. Scott Conklin. “Why won’t it run? Because if it runs, it takes away the conspiracy theories. It takes away the fact that what they’re saying is nonsense and not true.”

Joey Cappelletti, a corps member for the Associated Press/Report for America Statehouse News Initiative, contributed to this report from Lansing, Michigan. Follow AP for full coverage of the midterms at https://apnews.com/hub/2022-midterm-elections and on Twitter, https://twitter.com/ap_politics.