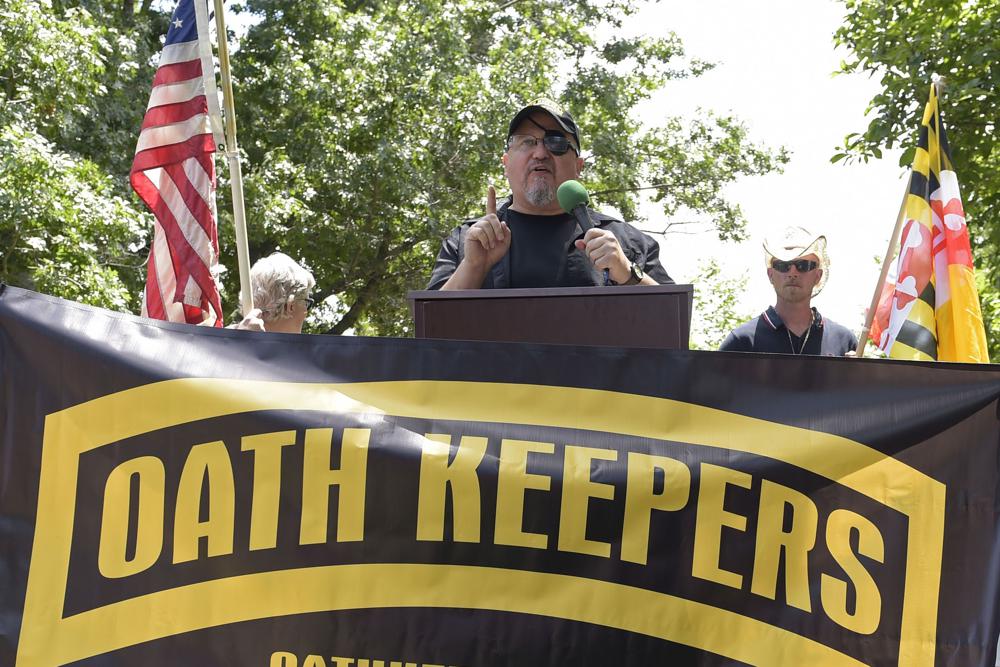 FILE - Stewart Rhodes, founder of the Oath Keepers, center, speaks during a rally outside the White House in Washington, June 25, 2017. A new report says that the names of hundreds of U.S. law enforcement officers, elected officials and military members appear on the leaked membership rolls of a far-right extremist group that's accused of playing a key role in the Jan. 6, 2021, riot at the U.S. Capitol. The Anti-Defamation League Center on Extremism pored over more than 38,000 names on leaked Oath Keepers membership lists to find more than 370 people it believes are currently working in law enforcement agencies.(AP Photo/Susan Walsh, File)

MADISON, Wis. (AP) — A local alderman in Wisconsin whose name appears on the membership rolls of a far-right extremist group has resigned citing safety concerns for his family.

Madison Alderman Gary Halverson was among hundreds of elected officials, military members and law enforcement officers who were on a leaked list of Oath Keepers members, the group that’s accused of playing a key role in the Jan. 6 riot at the U.S. Capitol.

Halverson is one of six local elected officials in Wisconsin on the list. Another is a Holmen Village Board member, Randy Stanek.

Halverson said his resignation follows some vandalism at his house, which he said has triggered symptoms of post-traumatic stress disorder for his wife.

“For anyone who has PTSD, or lived with someone who does, knows that when something happens that is triggering, it is absolutely terrifying, and that terror can last for days or weeks or longer,” Halverson said in a statement. He did not specify what damage was done to his property or how it might be linked to his Oath Keepers membership.

Halverson was elected in April 2021 and had one year left in his term.

Halverson told the Milwaukee Journal Sentinel he joined the Oath Keepers in mid-2020 without vetting the organization.

“I thought I joined an organization that welcomed veterans who cared about our democracy,” Halverson said earlier this month. “I was misled and I terminated the membership two months later in Aug 2020.”

The Anti-Defamation League Center on Extremism identified more than 609 people living in Wisconsin as members, including six elected officials, four currently working in law enforcement agencies, one member of the military and three first responders.