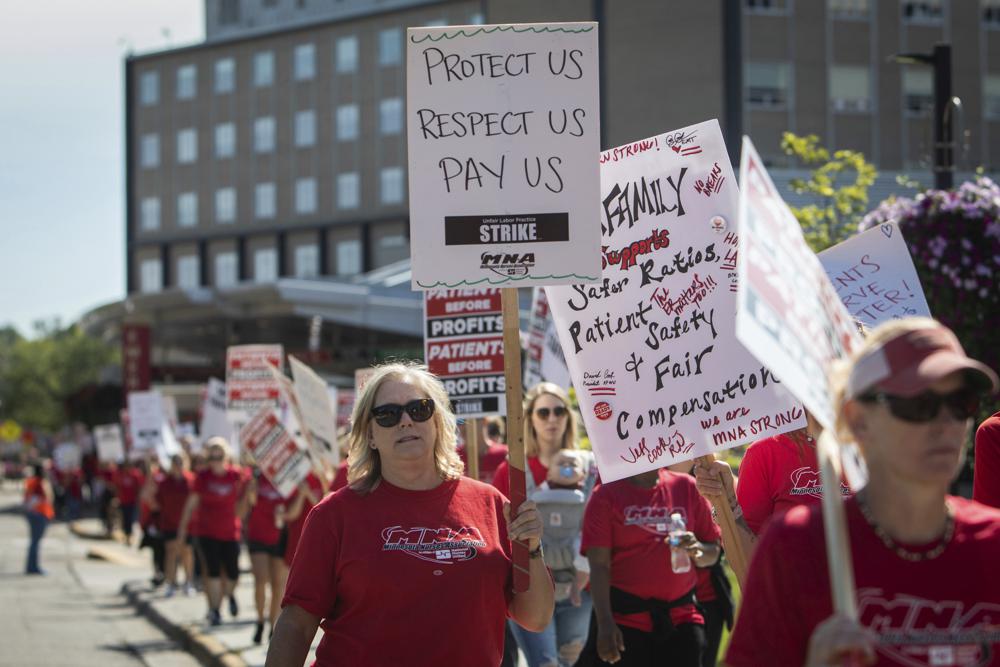 Nurses picket outside North Memorial Hospital in Robbinsdale, Minn. on Monday, Sept. 12, 2022. Thousands of nurses in Minnesota launched a three-day strike Monday, pressing for salary increases they say are needed to retain nurses fleeing the profession under stresses worsened by the coronavirus pandemic. (Ben Hovland/Minnesota Public Radio via AP)

MINNEAPOLIS (AP) — Thousands of nurses in Minnesota launched a three-day strike Monday, pressing for salary increases they say will help improve patient care by resolving understaffing stresses that have worsened in the coronavirus pandemic.

Some 15,000 nurses at seven health care systems in the Minneapolis and Duluth areas walked out, a number the union says makes it the largest strike ever by private-sector nurses. The affected hospitals said they have recruited temporary nurses and expected to maintain most services.

Scores of nurses began walking the picket line at 7 a.m. outside Children’s Hospital in Minneapolis, one of 15 hospitals affected. Clad in the red T-shirts of the Minnesota Nurses Association and carrying signs with such slogans as, “Something has got to give,” several said their chief concern was patient safety.

Tracey Dittrich, 50, a registered nurse at the hospital for nearly 24 years, said nurses are tired of “hospital administrators and managers that are telling us to do more.” The hospitals need more nurses and more support staff, and higher pay will help, she said.

“There are shifts where you have three critically ill patients, and you have to decide which patient gets the care, when,” Dittrich said. “I work with people all the time that go home every day and feel horrible because one child had to wait longer for medication, or another child needed to wait longer for an IV. Another child maybe had to wait for a breathing treatment because we just couldn’t get to them all fast enough.”

Union spokesman Sam Fettig said the nurses chose a three-day strike, rather than an open-ended walkout, out of concern for patients.

The hospitals have offered a 10-12% wage increase over three years, but nurses are seeking more than 30%. Hospital leaders called their wage demands unaffordable, noting that Allina and Fairview hospitals have posted operating losses and that the cost of such sharp wage increases would be passed along to patients.

“The union rejected all requests for mediation and held fast to wage demands that were unrealistic, unreasonable and unaffordable,” several of the Twin Cities hospitals under strike said in a joint statement.

Youtube video thumbnail
The statement said people with emergency issues should continue to call 911 or go to emergency rooms. It said despite staffing hospitals with “experienced nurse managers, trained replacement nurses and some existing traveler nurses” that people may see some delay in being treated.

Jean Ross, co-president of National Nurses United, billed as the largest union and professional association of registered nurses in the U.S., said more nurses across the country are pushing back and that most job actions revolve around the same core issues — staffing and pay.

“The pandemic did so many things in pointing out, clarifying and shining a light on what life is like in the hospitals and what nurses are expected to do, which is a lot with very little,” Ross said. “We have to have a bottom line where you just can’t shove any more patients on to that nurse.”

Kathy Misk, another registered nurse at Children’s, works in case management and helps families transition from hospital care to caring for their child at home. Misk said a shortage of nurses has sometimes required keeping “high-tech” children – those who need special equipment to breathe, for example – from going home as soon as they otherwise could. Raising pay could help the hospital keep nurses on staff, she said.

“You don’t retain nurses with low wages,” Misk said. “When you incentivize nurses with pay, what you’re saying to them is they have worth, and they are able to stay in one job.”

When asked about Misk’s statement that some children have not gone home as soon as they might have, Nick Petersen, a spokesman for Children’s, said children are admitted or discharged “based on the expert judgment of the medical professionals who care for them.”

The hospitals affected by the strike are operated by Allina Health, M Health Fairview, Children’s Hospital, North Memorial and HealthPartners. In Duluth, it is Essentia and St Luke’s.

Separately, in Wisconsin, a potential three-day strike by nurses at UW Health, one of the state’s largest health systems, that was set to start Tuesday was averted when the nurses and the UW Hospital board reached an agreement. Details weren’t immediately released.

The Minnesota nurses’ strike comes amid an upsurge in union activity nationwide.

A national railroad strike could begin as early as Friday unless Congress steps in to block it. The two largest railroad unions have been demanding that the major freight carriers go beyond a proposed deal recommended by arbitrators appointed by President Joe Biden.

Some high-profile companies, including Starbucks, are among those trying to stifle ongoing unionization efforts. Since late last year, more than 230 U.S. Starbucks stores have voted to unionize, which Starbucks opposes.

By TRISHA AHMED and GRETCHEN EHLKE
Ehlke reported from suburban Milwaukee. Steve Karnowski in Minneapolis contributed to this report. Ahmed is a corps member for the Associated Press/Report for America Statehouse News Initiative. Report for America is a nonprofit national service program that places journalists in local newsrooms to report on undercovered issues.