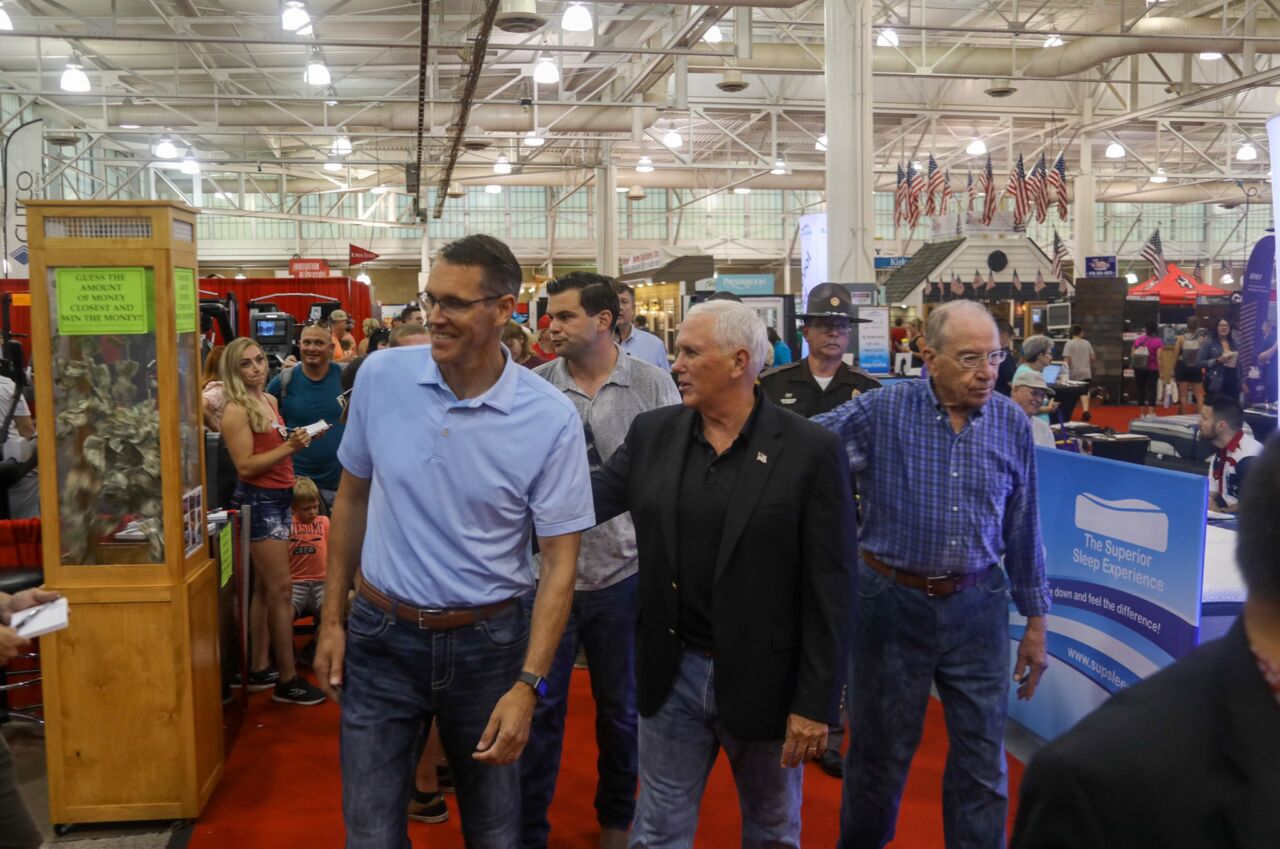 Four years later, almost as many Democrats made the pilgrimage to the fair, including former U.S. Housing and Urban Development Secretary Julian Castro, who snaked his way past tables under the Iowa Pork Producer’s tent at the annual Midwestern tribute to overindulgence.

But as the 2022 fair entered its final weekend, the 2024 traffic was noticeably light.

It speaks to the careful dance that potential presidential candidates are attempting as Democrats remain uncertain about President Joe Biden’s political future and many Republicans avoid taking on former President Donald Trump. Several would-be GOP candidates have quietly made political inroads in the first-in-the-nation nominating state, but they’ve done so by campaigning with Iowa candidates, not by being so obvious as to stand on straw bales at a perennial stop for White House hopefuls.

“There’s a bit of a Trump effect going on. They are still coming here. But they know there needs to be that emphasis that they are here for Iowa Republican candidates,” said Michael Bousselot, a former top aide to Republican Gov. Kim Reynolds and now a Des Moines-area GOP state representative. “The fair is more in-your-face campaigning. If you’re too overeager, people might say, ‘Whoa, President Trump is still the guy.’”

That means the few who entered the gates on Des Moines’ working-class east side were doing so with little such concern.

A cowboy-boot-wearing Pence was escorted by seven-term Republican Sen. Chuck Grassley — who will turn 89 next month — as have countless White House prospects over the years. The former vice president was careful, however, to keep his political remarks focused on the November midterm election, when Grassley is on the ballot, and not on the 2024 presidential race.

“It’s an honor to be here at the Iowa State Fair with you,” he told Grassley, with the politicians surrounded by dozens of news reporters and photographers in the shadow of the century-old brick grandstand. “Iowa and America need six more years of Chuck Grassley.”

Pence later got caught in a fast-developing thunderstorm, which soaked him and his entourage as they sought shelter under the Iowa Pork Producers tent. Undeterred, Pence waded through the damp crowds of fairgoers and even got in a few bites of one of the fair’s signature hand-held caloric monstrosities.

As hail pummeled the roof, Pence sampled a “picnic in a cup” — pulled pork, coleslaw, baked beans and Fritos, topped with barbecue sauce and bacon.

Politicians’ food choices and attire at the Iowa State Fair are almost as important as the visits themselves.

In 2003, Democrat John Kerry memorably ordered a strawberry smoothie, notable for an event known for its celebration of meat and deep-fried foods. In 2007, Republican Fred Thompson was mocked for sporting Gucci loafers, which stood out among the more common flip-flops and cowboy boots of attendees.

Hogan more anonymously chowed down on a grilled pork chops — a rite of passage for any White House aspirant — as he meandered through the fair with Reynolds, his fellow governor.

Despite the smiles and laughter they shared, the pair painted an awkward political picture. Reynolds, heavily favored to win reelection in November, is backed by Trump and is a devoted supporter of the former president.

The dynamic reflects both the state GOP’s pro-Trump lean but also the lurking liabilities for him.

A majority of Iowa Republicans — 57% — said they hope Trump decides to run again for president in 2024, according to a July Des Moines Register/Mediacom Iowa Poll. One-third of respondents said they hope he doesn’t.

Trump has enjoyed his kingmaker status over the past few months, boosting his endorsed candidates to victory in primary elections ranging from top of the ticket to state legislature. And while he faces a number of swirling investigations, including scrutiny from a U.S. Department of Justice search of his Florida home for classified documents, aides say it’s more a matter of when he announces his candidacy for president than whether he announces it.

Kevin Holmes, a Republican from central Iowa, would “absolutely” consider supporting an alternative to Trump in the 2024 caucuses.

“I’m just not happy with Trump’s character,” the 61-year-old retired police officer said while touring the fair with his wife. “He’s alienated an awful lot of people. If there were a viable alternative, I wouldn’t hesitate to get on board.”

While Florida Gov. Ron DeSantis — a common Trump alternative mentioned by Iowa Republicans — has steered clear of Iowa as he seeks reelection in November, others such as Arkansas Sen. Tom Cotton, former U.N. Ambassador Nikki Haley, former Secretary of State Mike Pompeo and others have visited Iowa this summer to campaign for Reynolds, Grassley and others.

On Thursday, Cruz was in the northern Iowa summer resort town of Clear Lake, headlining a private fundraiser for Grassley.

Cruz, who won the 2016 caucuses and campaigned deep into that primary season, said this month he would wait to see what Trump’s plans were before he entertained a second presidential campaign. He also suggested a Trump candidacy would keep several prospects from entering the 2024 race.

With that in mind, Cruz was in and out of Iowa in one day, avoiding the fair by 110 miles.