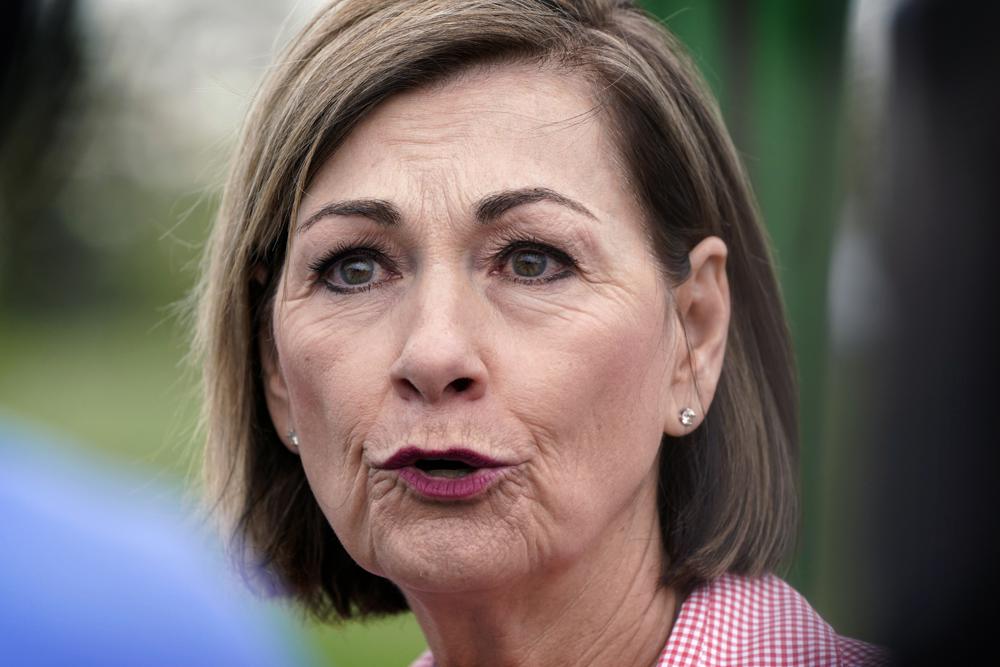 FILE - Iowa Gov. Kim Reynolds speaks to reporters on May 17, 2022, in Prairie City, Iowa. Reynolds asked the Iowa courts on Thursday, Aug. 11, 2022, to allow her to implement a 2018 law banning abortions once cardiac activity is detected. The law was blocked by a judge in 2019, as unconstitutional. (AP Photo/Charlie Neibergall File)

DES MOINES, Iowa (AP) — Iowa Gov. Kim Reynolds asked the state courts on Thursday to allow her to implement a law banning most abortions that a judge permanently blocked in 2019.

Reynolds previously said she would turn to the courts instead of calling a special session to hold a divisive abortion debate and vote just months before she and several other Republican leaders run for reelection. The court filing is just the first step in a legal battle that could take months to resolve and end up before the Iowa Supreme Court again.

The 2018 law bans abortions once cardiac activity can be detected, usually around six weeks of pregnancy and before many women know they are pregnant. An Iowa law banning abortions after 20 weeks of pregnancy remains in effect while Reynolds pursues the tougher ban in court.

Reynolds’ lawyers argue that since the U.S. Supreme Court and the Iowa Supreme Court have now removed broad constitutional protections for abortion rights, the previous order should be removed and the law enforced.

“The historic U.S. Supreme Court ruling overturning Roe has given us a new hope and pathway forward to challenge the Iowa court’s previous decision,” Reynolds said in a statement. “Life and death are determined by a person’s heartbeat, and I believe that includes our unborn children.”

Laws such as Iowa’s ban abortion when a “fetal heartbeat” can be detected, though that does not easily translate to medical science. That’s because at the point where advanced technology can detect that first visual flutter, the embryo isn’t yet a fetus, and it doesn’t have a heart. An embryo is termed a fetus eight weeks after fertilization.

Iowa House Democratic Leader Jennifer Konfrst said Reynolds is circumventing the will of the people in a state where polls have shown most people support abortion rights. A poll published last month by the Des Moines Register indicated 60% of Iowa residents believe abortion should be legal in most or all cases.

“This is the opposite of what Iowans are telling us they want,” Konfrst said. “This is way extreme. We’ve seen voters across the country reject this and because the governor knows voters would reject this here in Iowa, she’s playing politics.”

Iowa’s high court in June overturned a previous ruling that guaranteed the right to abortion under the state constitution, acting just one week before the U.S. Supreme Court overturned Roe v. Wade.

Reynolds’ lawyers said the state Supreme Court “can and should dissolve the injunction permanently right now because no additional factual development is needed to establish that there has been a ‘substantial change’ in the law.”

The law was successfully challenged by abortion provider Planned Parenthood and lawyers from the American Civil Liberties Union of Iowa. They said they plan to continue to fight Reynolds’ efforts in the state.

“This is an outrageous and dangerous attack on Iowa women looking to take away practically all access to abortion in our state,” said ACLU of Iowa Legal Director Rita Bettis Austen. “We will continue to do everything in our power to stop attempts at banning abortion in Iowa.”