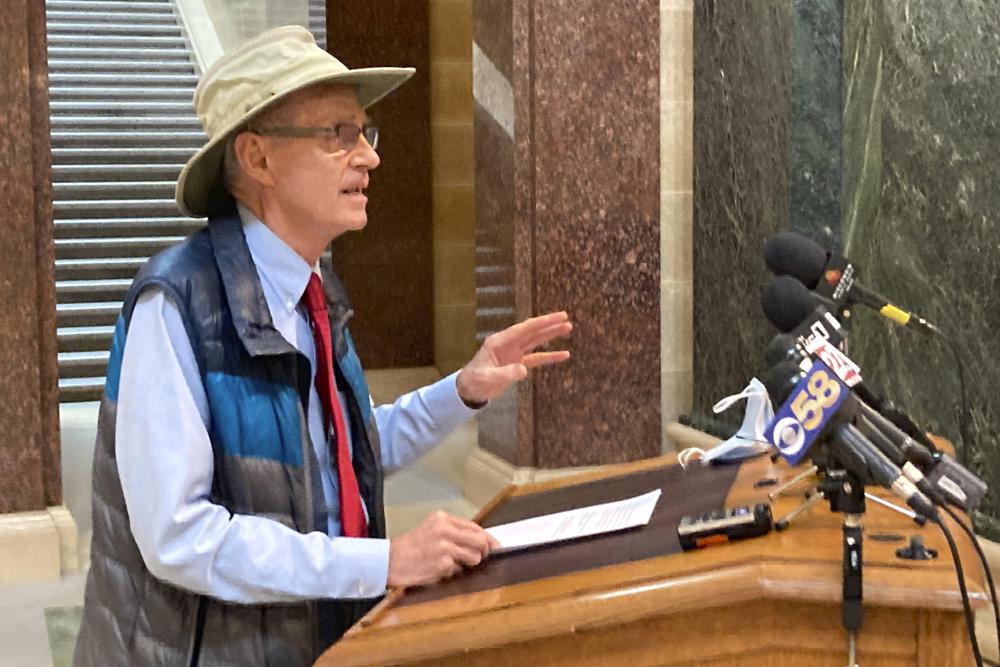 FILE - Wisconsin Secretary of State Doug La Follette announcing March 17, 2022, he will seek reelection in November during a news conference at the state Capitol in Madison. (AP Photo/Todd Richmond)

Voters in four states on Tuesday will determine their party’s nominees for the statewide office that typically oversees elections.

Much of the attention will center on Wisconsin, where the secretary of state does not have any role with elections. Republicans want to change that should they win the office in November. Primaries are also being held in Minnesota, Connecticut and Vermont.

In Wisconsin, all three GOP candidates on Tuesday’s ballot have echoed former President Donald Trump’s false claims that fraud cost him the 2020 election and have called for the dismantling of the Wisconsin Elections Commission, an agency established just six years ago by Republican lawmakers with bipartisan support.

The Republican candidates have all sharply criticized decisions made by the commission heading into the 2020 election, when the COVID-19 pandemic brought major challenges to running elections, and say they would rather empower the secretary of the state so voters can hold someone accountable for election-related decisions.

To accomplish their goal, Republicans also would need to defeat Democratic Gov. Tony Evers, who would block such a move, in November.

The Republicans vying for the nomination in Wisconsin are state Rep. Amy Loudenbeck, businessman Jay Schroeder and Justin Schmidtka, who hosts a political podcast.

On the Democratic side, longtime Secretary of State Doug La Follette faces challenger Alexia Sabor, who is the chair of the Dane County Democratic Party Executive Board. La Follette, 81, was first elected to the position in 1974.

La Follette has said he decided to run again to stop Republicans from meddling with elections, citing Trump’s call to Georgia’s secretary of state, Brad Raffensperger, after the 2020 election asking him to “find” enough votes to overturn Biden’s win in the state.

In Minnesota, the leading Republican candidate has called the 2020 election “rigged” and has faced criticism for a video attacking three prominent Jewish Democrats, including the current secretary of state, Democrat Steve Simon, who is seeking reelection.

Kim Crockett has also called the 2020 election a “train wreck” and accused state election officials of using the pandemic as “cover to change how we vote, but also how the vote is counted.”

Races in Connecticut and Vermont are noteworthy because it’s the first time in more than a decade that the seats have been open. Both longtime Democratic secretaries of state opted not to seek reelection this year.

On the Democratic side, state Rep. Stephanie Thomas of Norwalk, who won the party’s endorsement at the state convention this spring, faces Maritza Bond, health director for the city of New Haven.

In Vermont, the Democratic primary has drawn the most interest. The candidates are Deputy Secretary of State Chris Winters, state Rep. Sarah Copeland Hanzas, and Montpelier City Clerk John Odum.

A perennial candidate for office, H. Brooke Paige, is the lone person running in the GOP primary. He also appears on the ballot for three other statewide offices.