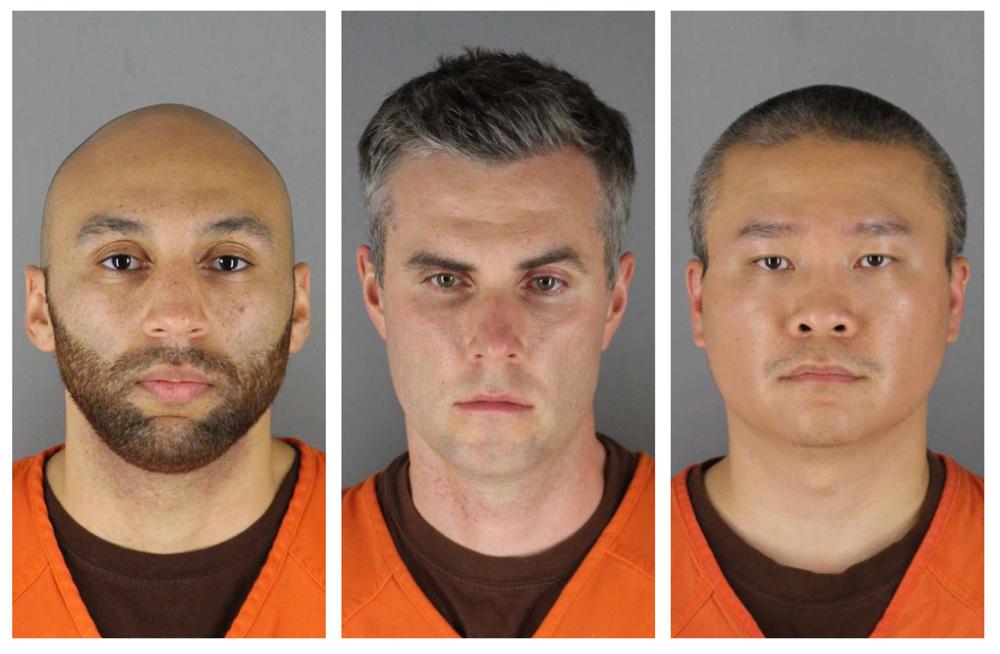 FILE - This combination of photos provided by the Hennepin County Sheriff's Office in Minnesota on June 3, 2020, shows, from left, former Minneapolis police officers J. Alexander Kueng, Thomas Lane and Tou Thao. The former policer officers have been convicted of violating George Floyd’s civil rights when Officer Derek Chauvin pressed his knee into Floyd’s neck for 9 1/2 minutes as the 46-year-old Black man was handcuffed and facedown on the street on May 25, 2020. (Hennepin County Sheriff's Office via AP, File)

ST. PAUL, Minn. (AP) — The last two former Minneapolis police officers to be sentenced for violating George Floyd’s civil rights are scheduled to learn their penalties Wednesday, which could set in motion another round of plea deal discussions in state court over a killing that sparked a reckoning on racial injustice.

J. Alexander Kueng and Tou Thao were convicted in February of two counts of violating Floyd’s civil rights in the 2020 slaying. The jury found they deprived the 46-year-old Black man of medical care and failed to stop Derek Chauvin as he knelt on Floyd’s neck for 9 1/2 minutes while Floyd gasped for air.

Kueng held Floyd’s back, former Officer Thomas Lane held his feet and Thao kept back bystanders, some of whom recorded video that led to worldwide protests.

Chauvin, who pleaded guilty last year to violating Floyd’s civil rights and the civil rights of a teenager in an unrelated case, was sentenced to 21 years in federal prison. Lane, who twice asked if Floyd should be rolled onto his side so he could breathe, was convicted of one count and was sentenced to 2 1/2.

Prosecutors have not made specific recommendations for Kueng and Thao’s sentence, but have requested less time than Chauvin and “substantially” more than Lane. Thao’s attorney is asking for two years; Kueng’s request is sealed.

Kueng and Thao got a victory last week when U.S. District Judge Paul Magnuson issued rulings that affect how their federal sentences will be calculated and could mean far less prison time. The rulings — particularly one that cross-references their crimes with involuntary manslaughter instead of murder — mean the men head into Wednesday’s hearing with a recommended range of 4 1/4 years to 5 1/4 years. They might have faced a life sentence.

“It made a huge difference,” Mark Osler, a professor at the University of St. Thomas School of Law and former federal prosecutor, said. “The impact of it is already baked in now.”

Osler said one key is if Magnuson determines that Kueng and Thao were “minor” or “minimal” participants in the crime. Magnuson found Lane was a minimal participant, resulting in a lower sentence. Osler said a minor participant would be more culpable.

“You have one officer who at least made some effort to change the trajectory, and that’s Lane. You have one most directly involved in the killing of George Floyd, and that’s Derek Chauvin — and then you have these two in the middle,” Osler said.

The potential for lower sentences for Kueng and Thao raises questions about whether they will consider a plea deal or risk trial Oct. 24 in state court, where they face counts of aiding and abetting second-degree murder and second-degree manslaughter.

Osler said once the men know what their federal sentence is, they will likely seek a plea deal on the state charges that won’t exceed the federal sentence and will let them serve the sentences concurrently.

Kueng and Thao can still appeal their federal convictions. If they plead guilty in state court, any federal appeal would be moot, said Mike Brandt, a criminal defense attorney who has been following the case. But it’s also hard to win a federal appeal, he said.

“Those are some of the calculuses they are going to have to make in terms of, `Do I go to trial and risk something worse? Do I think I have a good shot at appeal on the federal case?’” Brandt said.

Kueng, who is Black, and Thao, who is Hmong American, likely will remain free on bond after Wednesday sentencing and be allowed to self-report to prison, especially since they have a pending trial and will need to be in contact with their attorneys and be present for court proceedings.

Lane, who is white, pleaded guilty to a state charge of aiding and abetting second-degree manslaughter and is awaiting sentencing in that case. He was allowed to remain free on bond after his federal sentencing.