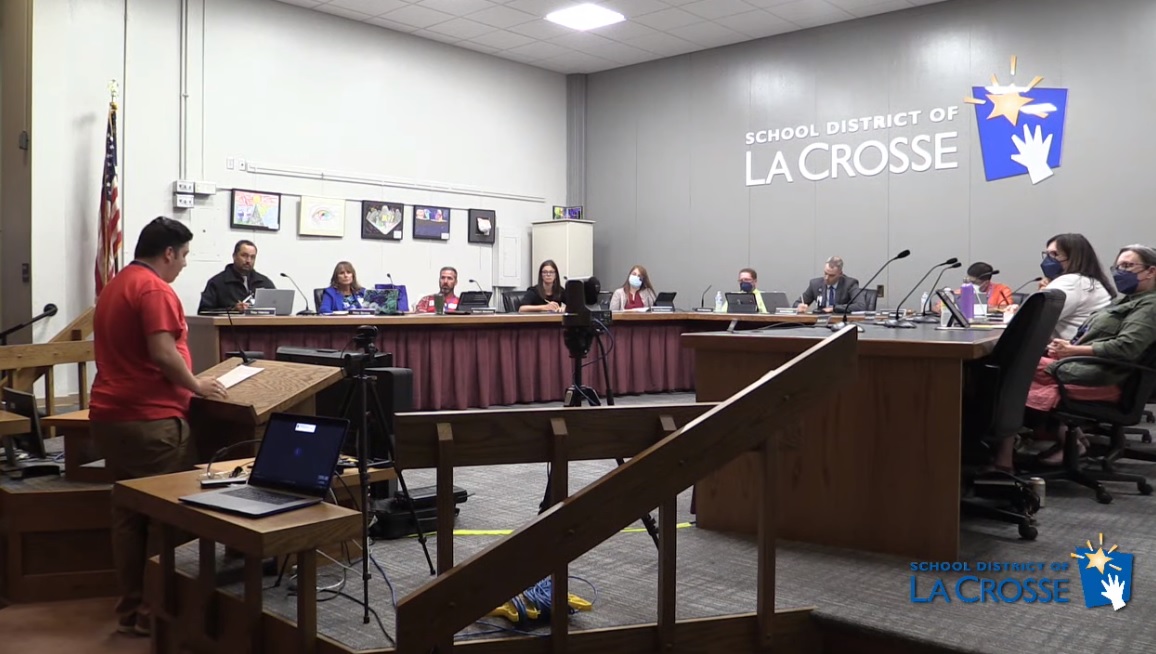 La Crosse Education Association president Jesse Martinez addresses the La Crosse School Board on Monday, July 19, 2022, before a vote is taken on pay increases for teachers,

The La Crosse School Board voted Monday night to move ahead with the proposed 2% salary raise for teachers in the district, despite weeks of mediation and protests.

Teachers have been speaking out at board meetings for weeks voicing their opposition to the proposed raise.

The La Crosse Education Association (LEA) held a rally at the end of June and circulated a petition that has now received over 640 signatures — 250 from community members — calling for a 4.7% pay increase — one LEA president Jesse Martinez said on La Crosse Talk PM is not a “raise,” but a pay increase that combats the rate of inflation.

La Crosse School Board president Juan Jimenez called the vote Monday “one of the hardest I’ve had to take.”

Other board members echoed this, saying that they wish they could have given the requested 4.7% raise, but due to a lack of state funding for schools, the district does not have the funds available.

“I hope to god that someday soon we will have a legislature that will have the courage to understand what public education means,” Jimenez said. “ I wish that we had legislators who would allow school districts to raise the funds necessary to just be able to pay the bills, and part of those bills is paying their employees the wages they deserve.”

The vote passed 8-1 after over an hour of closed session deliberation, with board member Robert Abraham being the only dissenting vote.

Board members said that they asked the superintendent to “ensure that there are no stones that have been left unturned” when looking for ways to increase the raise.

There was also discussion on the importance of the proposed long-range facilities plan, which includes a $194.7 million high school consolidation plan.

“Is there any way to give more than a 2% increase without adding to our already projected $2.4 million deficit next year?” board member Laurie Cooper Stoll asked. “The board has pushed for systemic change, including a comprehensive long-range facilities plan, because we want to ensure that the district is in a better financial place in the coming years.”

Jimenez wanted to assure teachers that the board believes in the work they are doing, and wished they could give them the pay they deserve.