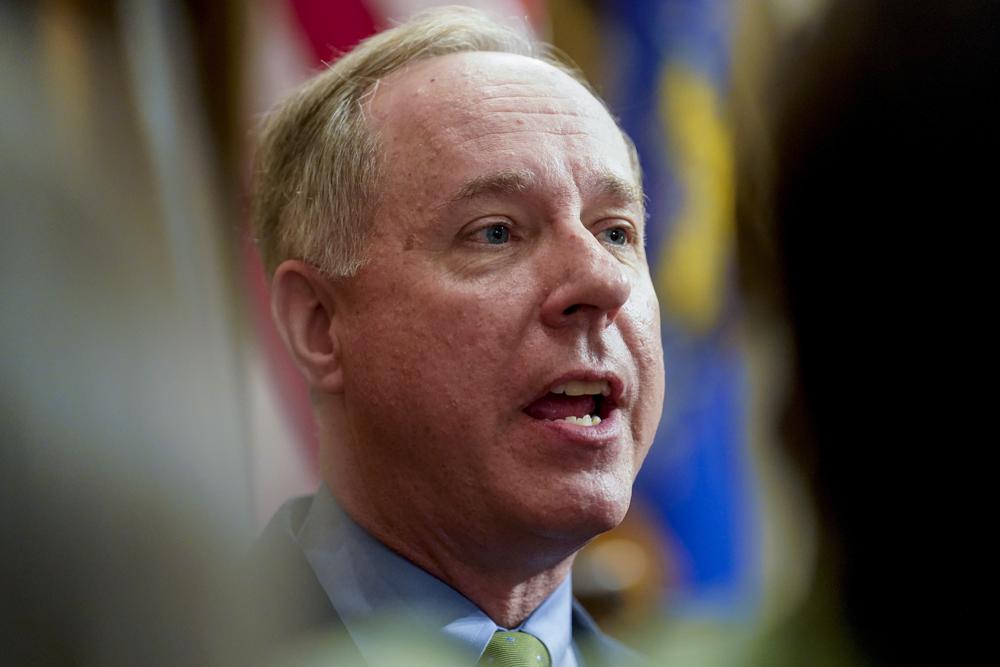 FILE - Wisconsin Assembly Speaker Robin Vos talks to the media after Gov. Tony Evers addressed a joint session of the Legislature in the Assembly chambers during the governor's State of the State speech at the state Capitol on Tuesday, Feb. 15, 2022, in Madison, Wis. Vos said Thursday, May 26, 2022, that he is open to the idea of arming teachers following the latest school shooting in Texas, while he dismissed as “disingenuous" an offer from Democratic Gov. Tony Evers to find common ground.(AP Photo/Andy Manis)

MADISON, Wis. (AP) — Wisconsin’s top legislative Republican said Thursday that he is open to the idea of arming teachers following the latest school shooting in Texas, while he dismissed as “disingenuous” an offer from Democratic Gov. Tony Evers to find common ground.

Assembly Speaker Robin Vos told The Associated Press that finding ways to better protect schools, including with additional police, armed security guards and armed teachers, “should be on the table.”

“It’s not just teachers. It’s making sure that people who are inside of school have the ability to defend themselves,” Vos said. “But the idea that we are going to take a heinous act like this and find some kind of logical way to prevent it 100% of the time, I just don’t see that occurring.”

“We can’t be turning our schools into war zones,” Kaul said. “It’s not going to make them safer. In fact, it would make them more dangerous.”

Vos said more people in schools trained to handle violent outbreaks could respond not just to shootings but to a whole array of problems, including sexual assaults and other crimes.

Past Republican proposals to arm teachers have not gone anywhere in the GOP-controlled Legislature. And any bill to do that now would certainly be vetoed by Evers, who is up for reelection in November.

Past Republican proposals to arm teachers have not gone anywhere in the GOP-controlled Legislature. And any bill to do that now would certainly be vetoed by Evers, who is up for reelection in November.

Earlier this year, Evers vetoed Republican bills that would have allowed holders of concealed carry permits to have firearms in vehicles on school grounds and in churches located on the grounds of a private school. He also vetoed a measure that would have allowed anyone with a concealed carry license from any state to be armed in Wisconsin. Currently, only people with licenses from states that conduct background checks on applicants can carry concealed guns in Wisconsin.

Evers and other Democrats called for action this week after an 18-year-old gunman killed 19 children and their two teachers at Robb Elementary School in Uvalde, Texas.

Evers called a special session in 2019 for the Legislature to pass bills instituting a universal background check for gun purchases and a “red flag” law that would give judges the ability to temporarily take away firearms from people determined to be a risk.

The Legislature did not take up those bills. Democrats on Wednesday, including Kaul, renewed the call for Republicans to consider the bills.

Vos dismissed Kaul’s plea as “just trying to throw something out there to make himself relevant.” Kaul is also up for reelection in November.

Kaul said Vos and other Republicans who refuse to take action are “deflecting from the main issues to appease the far right ends of their base. And it’s a choice that they are making to ultimately not take action and instead to allow mass shootings to keep occurring one after the other without taking action.”

Evers urged lawmakers to look for common ground. But Vos, who has not spoken with Evers in more than a year and a half, said the offer was “not a serious effort.”

“Evers, in a disingenuous way, talks about things that are very difficult or impossible to accomplish as opposed to those things that really could be,” Vos said.

Evers’ spokeswoman Britt Cudaback did not immediately return a message.