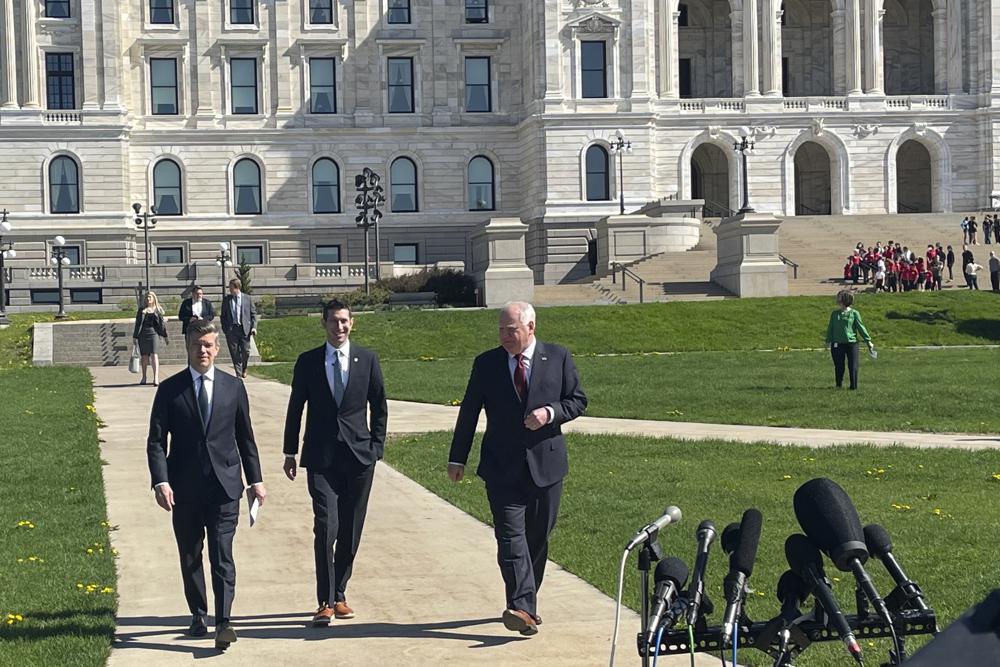 From left, Democratic House Majority Leader Ryan Winkler, of Golden Valley, Republican Senate Majority Leader Jeremy Miller, of Winona, and Democratic Gov. Tim Walz walk to meet reporters in front of the Minnesota State Capitol in St. Paul, Minnesota, on Monday, May 16, 2022. Walz and legislative leaders announced a bipartisan deal Monday on a framework for how to spend the state's huge budget surplus in the final week of the legislative session. (Mohamed Ibrahim/Report for America via AP)

ST. PAUL, Minn. (AP) — Democratic Gov. Tim Walz and legislative leaders said Monday that they reached a bipartisan deal on a broad framework for parceling out a massive budget surplus with just a week remaining in the session.

The agreement would devote $4 billion to tax relief, and another $4 billion to spending on education, public safety and health care. It would also leave $4 billion in the bank to guard against downturns amid the current economic uncertainty.

The plan in Minnesota, signed by Walz, Republican Senate Majority Leader Jeremy Miller, of Winona, and Democratic House Speaker Melissa Hortman, of Brooklyn Park, includes $1 billion for education; $1 billion for health care and human services, including the staffing crisis at nursing homes; $450 million for public safety and the judiciary, and $1.5 billion in other spending.

“There’s an awful lot of the hard work of democracy yet to be done this week, but the parameters have been set and they’ve been done in a way, that again, I think should make Minnesotans proud,” Walz said at a news conference outside the Capitol.

The deal also calls for $1.5 billion for a public works construction package known as a bonding bill that would use $1.4 billion in borrowing and $150 million in cash.

are under the gun because some of the bills will need to come together around midweek, and Walz said there likely will be “hiccups and glitches” along the way. The Legislature struggled all session to reach bipartisan agreements on how to use the state’s $9.25 billion budget surplus.

Miller said Republicans got their top priority for the surplus — “permanent ongoing tax relief” to put money back in people’s pockets at a time when Minnesotans are struggling with high inflation.

But details of whether they will include income tax rate cuts. the elimination of the tax on Social Security benefits, as Republicans want, or quick one-time rebates, as Walz has proposed, still need to be negotiated. That will fall mostly to the chairs of the Senate and House tax committees.

“My message to the conference committee members is, focus on areas of agreement. There is not much time to get this done before the end of session,” Miller said. “Some of the larger bills need to be agreed to and wrapped up probably by Wednesday at the latest.”

Democratic House Majority Leader Ryan Winkler, of Golden Valley, appeared on behalf of Hortman, who was quarantining with a mild case of COVID-19. She participated in the negotiations remotely.

Before Monday, the biggest bipartisan compromise of the session was a deal that rolled back an unemployment insurance tax increases, which was a top GOP priority, and $500 million in bonuses that Democrats sought for 667,000 frontline workers who were at extra risk during the pandemic.

Miller said the deal mostly came together during his conversations with Hortman on Saturday. Winkler said he and Hortman presented it to House Democrats on Sunday night. Winkler indicated that it was a better deal than his colleagues expected. Miller said his members would have preferred more tax relief and less spending.

Next Monday’s end of the session will mark the start of campaign season, with both parties heading into a critical midterm election.

“It’s going to be tough work, it’s going to be round the clock up here,” Walz said, pointing uphill to the Capitol. “They’re going to have to reach some compromises. … This is a big first step.”