Most people in US want masks for travelers: AP-NORC poll 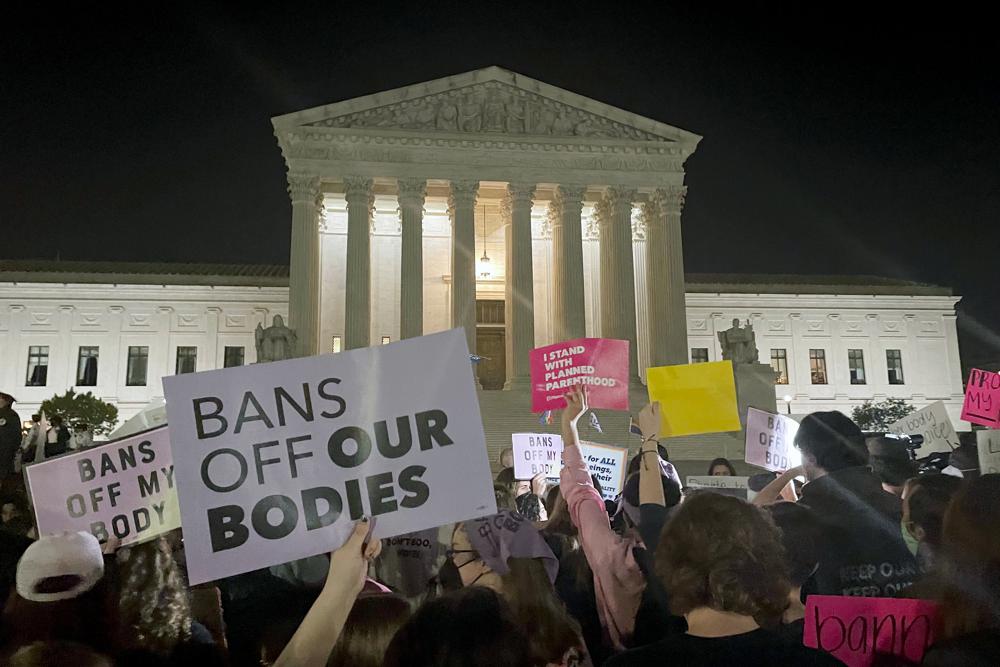 A crowd of people gather outside the Supreme Court, Monday night, May 2, 2022 in Washington. A draft opinion circulated among Supreme Court justices suggests that earlier this year a majority of them had thrown support behind overturning the 1973 case Roe v. Wade that legalized abortion nationwide, according to a report published Monday night in Politico. It’s unclear if the draft represents the court’s final word on the matter. The Associated Press could not immediately confirm the authenticity of the draft Politico posted, which if verified marks a shocking revelation of the high court’s secretive deliberation process, particularly before a case is formally decided. (AP Photo/Anna Johnson)

News late Monday of a leaked memo suggesting the U.S. Supreme Court could overturn Roe vs. Wade could have a big impact on Wisconsin.

The state’s law dates back to 1849 — a year after Wisconsin became a state — and bans almost all abortions, except when saving the mother’s life.

If Wisconsin’s 173-year-old law remains — which is highly likely given the divisiveness between Republicans who control the state Legislature and Democratic Gov. Tony Evers — doctors would be charged with felonies for performing abortions and face up to six years in prison and $10,000 in fines.

Wisconsin Assembly state Rep. Jill Billings of La Crosse talked about the state’s ancient abortion law back in October and how Democrats have been trying to address it, though that won’t happen this year. Republicans who control the state Legislature adjourned about two months ago for the rest of 2022.

“That legislation has been introduced a few different times to get that really draconian law off the books, but it hasn’t received a hearing,” Billings said on La Crosse Talk PM. “It’s very common for us to update statutes.

“In fact, four years ago there was an effort just to go through and kind of update language and other issues with statutes, but yeah, this one is still on the books.”

As for her stance on abortions, Billings had this to say:

“My feeling on this, look, I’m a legislator, and I don’t want to insert myself into the examining room,” Billings said. “I think these decisions are made between a woman and her doctor and if she has a partner or a spiritual advisor that she consults.

“I don’t think that we, as government officials, should be inserting ourselves in that situation with that very, very difficult decision.”

Politico reported a leaked memo showing the U.S. Supreme Court could overturn the 1973 Roe v. Wade law as early as this summer.

A Republican filibuster in the U.S. Senate is preventing any sort of vote on the matter. The only way to bypass it is to get 60 votes in the Senate or end the filibuster and pass the law with 50 votes. That also isn’t likely given Democratic Sens. Joe Manchin and Krysten Sinema have already voted to uphold the Senate filibuster rules.

Manchin also joined Senate Republicans in blocking the the Women’s Health Protection Act, which aimed to preserve access to abortion.