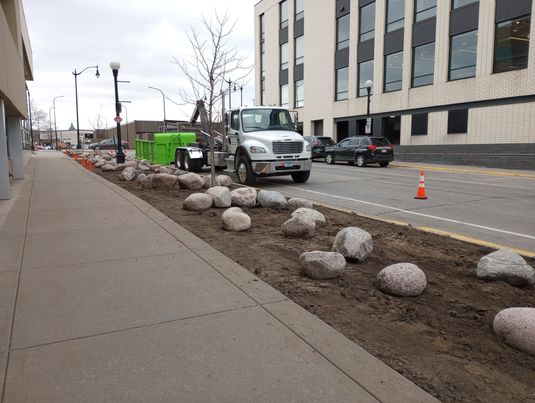 One less lawn to mow in downtown La Crosse.

This week, contractors removed the grass from the boulevard south of the La Crosse County courthouse, and installed large boulders as part of a landscaping project.

Ginkgo trees already in the boulevard will remain there, and other plants will be placed on the block.  The project is similar to decorations outside the health and human services building on the other side of 4th Street.

County officials say winter weather, and dogs urinating, were bad for the grass along Vine Street, outside the law enforcement center, which opened in 1997.

The “boulevard improvement” project was authorized last year by county officials.  A design plan says the boulders will help elevate the planting beds, and are too large to be used as “projectiles.”