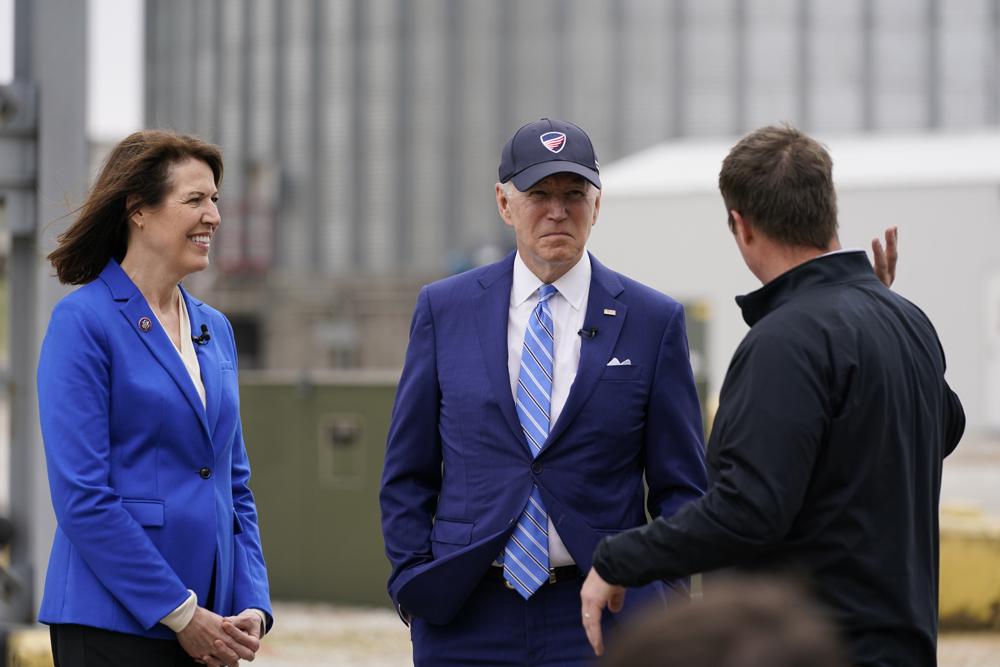 MENLO, Iowa (AP) — With inflation at a 40-year high, and corporations bring in record profits, President Joe Biden journeyed to corn-rich Iowa on Tuesday to announce a modest step aimed at trimming gasoline prices by about a dime a gallon at a limited number of stations by waiving rules that restrict ethanol blending.

His action reflects the ways Biden is deploying almost every weapon in his bureaucratic arsenal to ease price pressures, yet the impact appears to be small and uncertain. Inflation has only accelerated in recent months, instead of fading as Biden once promised it would after the recovery from the coronavirus recession following last year’s $1.9 trillion relief package.

A government report Tuesday that consumer prices jumped 8.5% in March from a year ago — the worst reading since December 1981 — only deepened the political challenge for Biden and fellow Democrats ahead of this year’s midterm elections. More than half the increase came from higher gas prices, which spiked in part because of Russia’s war in Ukraine, but costs also jumped for housing, food and other items.

“Your family budget, your ability to fill up your tank, none of it should hinge on whether a dictator declares war and commits genocide a half a world away,” the U.S. president said, referring to Russian President Vladimir Putin.

But in his remarks at the POET biofuels facility in Menlo, west of Des Moines, Biden acknowledged that the waiver on ethanol mixes was a small step.

“I’m doing everything within my power by executive orders to bring down the price,” he said. “It’s not going to solve all our problems, but it’s going to help some people.”

Most gasoline sold in the U.S. is blended with 10% ethanol, a biofuel that is currently cheaper than gas. Biden was announcing that the Environmental Protection Agency will issue an emergency waiver to allow widespread sale of a 15% ethanol blend that is usually prohibited between June 1 and Sept. 15 because of concerns that it adds to smog in high temperatures.

Senior Biden administration officials said the action will save drivers an average of 10 cents per gallon based on current prices, but at just 2,300 gas stations out of the nation’s more than 100,000. The affected stations are mostly in the Midwest and the South, including Texas, according to industry groups.

Administration officials said the EPA has determined that the “emergency” step of allowing more E15 gasoline sales for the summer is not likely to have a significant air quality impact. That’s despite some environmentalists long arguing that more ethanol in gasoline increases pollution, especially during warmer summer months.

The waiver is another effort to help ease global energy markets that have been rocked since Russia invaded Ukraine. Last month, the president announced the U.S. will release 1 million barrels of oil per day from the nation’s strategic petroleum reserve over the next six months. His administration said that has helped to slightly reduce gas prices lately, after they climbed to an average of about $4.23 a gallon by the end of March, compared with $2.87 at the same time a year ago, according to AAA.

“Not only is this decision a major win for American drivers and our nation’s energy security, it means cleaner options at the pump and a stronger rural economy,” Emily Skor, CEO of the biofuel trade association group Growth Energy, said in a statement.

Members of Congress from both parties also had urged Biden to grant the E15 waiver.

“Homegrown Iowa biofuels provide a quick and clean solution for lowering prices at the pump, and bolstering production would help us become energy independent once again,″ said Iowa Republican Sen. Chuck Grassley. He was among nine Republican and seven Democratic senators from Midwestern states who sent Biden a letter last month urging him to allow year-round E15 sales.

The trip will be Biden’s first as president to Iowa, where his 2020 presidential campaign limped to a fourth-place finish in the state’s caucus. He will arrive saddled with sagging approval ratings and the high inflation while his party faces the prospect of big midterm election losses that could cost it control of Congress.

Biden had hoped Democrats could run on the low 3.6% unemployment rate and an agenda geared toward lifting the middle class, but inflation has hijacked those ambitions and given Republicans a target for criticism.

Iowa Republican Party Chairman Jeff Kauffman was unsparing in his criticism of Biden’s handling of the economy and inflation. But, he said, the temporary move on ethanol was the right one.

“First of all, let me say that that’s a good thing. Absolutely good thing. It would have been nice had he done it earlier,” Kauffman said. “Am I glad about this waiver? Yes I am. Is it enough? Nope.”

The high inflation also poses a threat to Biden’s broader domestic agenda that likely hinges on the vote of Democratic Sen. Joe Manchin of West Virginia. Manchin released a statement saying that the Biden administration and the Federal Reserve failed “to act fast enough,” to curb costs for the American people and that the problem of high prices predates the invasion of Ukraine.

Manchin, whose opposition doomed Biden’s 10-year, roughly $2 trillion measure in December, had recently returned to the negotiating table with the White House. It remains unclear what impact the new inflation data will have on those negotiations.

After Iowa, Biden will visit Greensboro, North Carolina, on Thursday.

The EPA has lifted seasonal restrictions on E15 in the past, including after Hurricane Harvey in 2017. The Trump administration did so in the summer two years later but had that action struck down by a federal appeals court.

“We are right there with the administration on wanting to see relief for consumers at the pump, but an unlawful executive order is not how to solve the problem,″ said Chet Thompson, president & CEO of the American Fuel & Petrochemical Manufacturers.