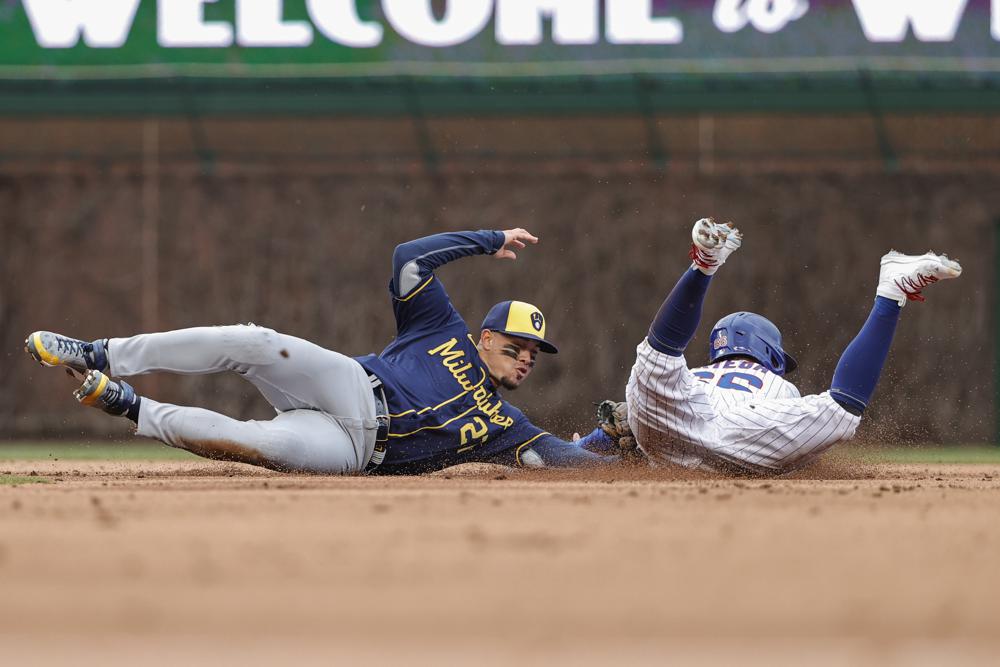 “Keep hitting more,” Happ cracked. “Yeah, try not to get cold after that.”

It was that kind of opening day for the Chicago Cubs.

Happ had three hits, including a tiebreaking two-run double in the seventh inning, and the Cubs beat the Milwaukee Brewers 5-4 on Thursday.

“Who had Nico in the first homer pool?” Cubs manager David Ross joked after the win.

“Never really actually found the command of the cutter,” Burnes said. “Kind of one of those things, I found it a little bit in the third, but then I just kind of lost it.”

Suzuki singled in the fifth for his first big league hit and walked twice. The 27-year-old finalized an $85 million, five-year contract with Chicago in March in the Cubs’ biggest move of the offseason.

“In all my at-bats I was able to be myself,” Suzuki said through a translator, “so just enjoyed the game today.”

Andrew McCutchen, Willy Adames and Rowdy Tellez each had two hits for Milwaukee, and Lorenzo Cain drove in two runs. McCutchen served as the designated hitter in his first game with his new team after agreeing to a one-year deal last month.

The Brewers erased a 3-1 deficit with two runs in the seventh, but the Cubs went ahead to stay in the bottom half.

With runners on the corners and two outs, Happ hit a drive off Jake Cousins that caromed off the wall in center. Clint Frazier and Willson Contreras scored on Happ’s second double of the day.

Happ, who homered on baseball’s first pitch of the 2018 season, had elbow surgery in February, but he is feeling pretty good now — about himself and his team.

“Burnes starting Game 1, to be able to kind of put up some runs there and then get a few more and tack on, that says a lot for where we’re at as a team,” Happ said.

The reigning NL Central champions got one back on Cain’s sacrifice fly in the eighth, but David Robertson worked the ninth for his first save since 2018 and No. 138 for his career.

Milwaukee went 1 for 10 with runners in scoring position and left nine runners on base.

“It felt like a game, we didn’t time our hits very well,” manager Craig Counsell said.

Making his third consecutive opening-day start, Hendricks permitted one run and three hits in 5 1/3 innings. The right-hander, who had a career-high 4.77 ERA last year, struck out seven and walked three.

Chris Martin (1-0) got two outs for the win in his Cubs debut.

The Brewers jumped in front when McCutchen singled and scored the majors’ first run on Cain’s groundout in the fourth. But the Cubs responded with three in the fifth.

Patrick Wisdom hit a sacrifice fly before Hoerner drove a 1-1 pitch from Burnes into the bleachers in left for a tiebreaking two-run shot. It was Hoerner’s first big league homer since Sept. 21, 2019, against St. Louis.

“Sometimes it just lines up,” a smiling Hoerner said.

Victor Caratini made his Milwaukee debut when he came on to catch Ashby in the bottom of the sixth. Caratini was acquired in a trade with San Diego on Wednesday.

Brewers right-hander Brandon Woodruff and Cubs left-hander Justin Steele start on Friday afternoon. But there is a wintry mix of precipitation in the forecast. Woodruff went 9-10 with a career-best 2.56 ERA in 30 starts last year. Steele made his big league debut in 2021, going 4-4 with a 4.26 ERA in 20 appearances, including nine starts.

Jay Cohen can be reached at https://twitter.com/jcohenap