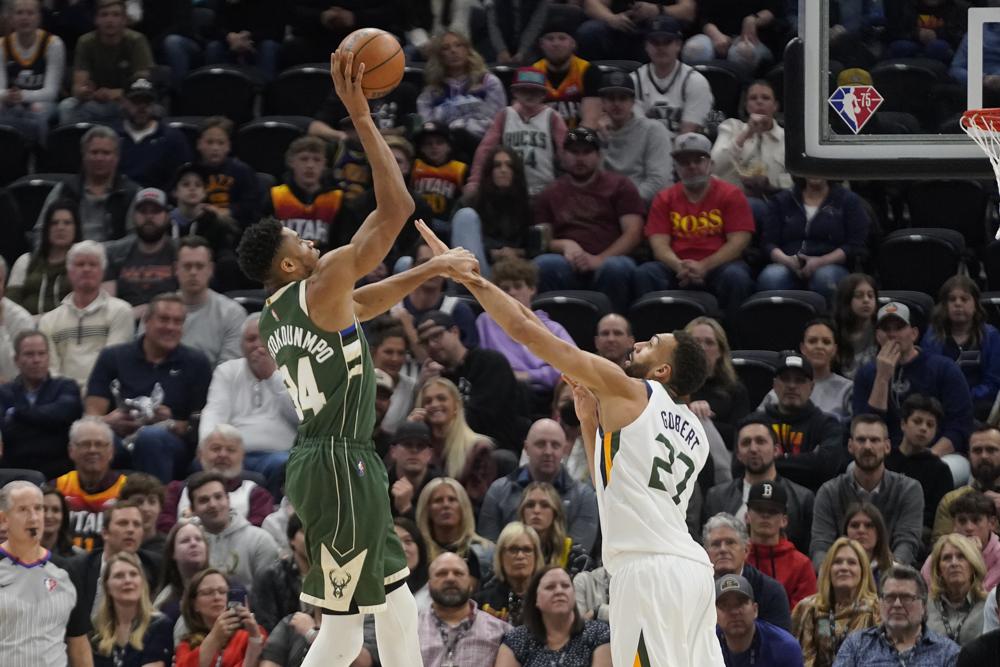 SALT LAKE CITY (AP) — Giannis Antetokounmpo scored 30 points and had 14 rebounds to help the Milwaukee Bucks rally and then fend off the Utah Jazz in the final seconds for a 117-111 victory on Monday night.

Jrue Holiday had 29 points and seven assists, and Khris Middleton scored 23 for Milwaukee, who saw Brook Lopez and George Hill both return to the lineup. Lopez had been sidelined with a back injury since the season opener and missed 67 games. Hill sat out 16 games with neck soreness.

The Jazz shaved a seven-point deficit to two on Gobert’s putback layup that made it 113-111 with 22 seconds left. But the Bucks’ Jevon Carter made a pair of free throws with 12.9 seconds remaining to seal it.

Utah made 10 3-pointers in the first quarter to offset 60% field-goal shooting from Milwaukee, including four 3s in a row — three from Mitchell — to take a 34-27 lead late in the quarter.

Despite scoring 29, however, Mitchell finished 10 of 32 from the field, including 5-for-17 from beyond the arc.

The Bucks led the entire second quarter after Middleton opened with a 3-pointer in the midst of a 22-6 run that put Milwaukee up 51-43. Holiday ignited the spurt late in the first quarter with back-to-back baskets.

Utah fell behind after it didn’t score for five minutes, and Milwaukee led by as many as 12 points before halftime, going up 65-53 after Holiday made one 3-pointer and assisted another to finish off a 14-5 run.

The Jazz countered with a pair of big runs to surge back ahead in the third quarter, including 3s Mitchell and Conley to cap a 16-3 run. The Jazz used a 14-1 run, punctuated by a driving floater from Jordan Clarkson, to extend their lead to 91-80.

Milwaukee rallied and surged ahead 107-100 midway through the fourth quarter following back-to-back baskets from Antetokounmpo.

Bucks: Milwaukee snapped a 19-game losing streak to Utah in Salt Lake City dating back to the 2002-03 season. … Holiday finished with a season-high five steals.

Bucks: At Sacramento on Wednesday.