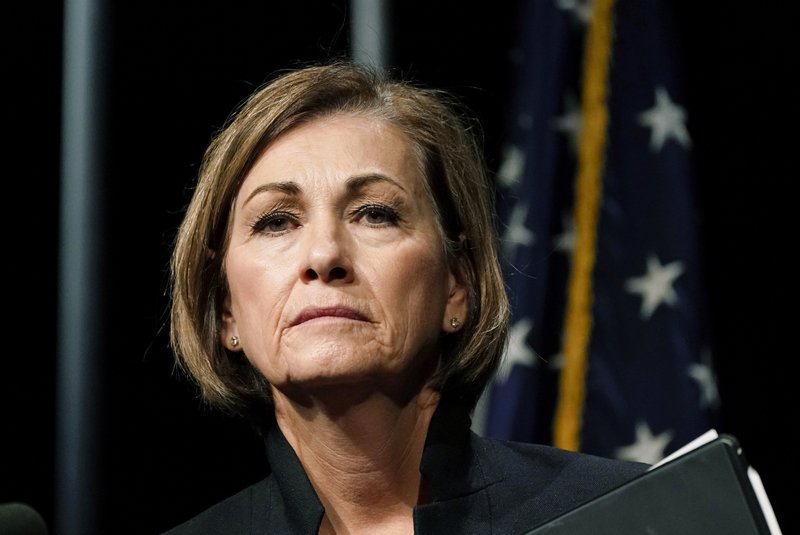 Auditor Rob Sand released a report Tuesday that repeated his recommendation from October 2020 and last December that the funds were improperly used and should be returned.

Sand said in December that the Republican governor not only misspent the federal money but tried to conceal it by passing it through the state Department of Homeland Security and Emergency Management.

After that report was released, Sand said he finally received in December a 159-page packet of information he had sought repeatedly from the governor’s office to justify use of federal pandemic emergency money for her staff’s salaries.

After reviewing the documentation, he said his recommendation to return the $448,448 remains the same.

The governor’s staff salaries had already been considered in creating her budget prior to the pandemic, making them ineligible for payment out of the federal pandemic relief money, he said. Reynolds paid salaries for 21 staff members — including her spokesman, a lawyer and her chief of staff — from March 15 to June 30, 2020, out of federal funds.

Alex Murphy, a spokesman for Reynolds, has said Reynolds’ staff members spent most of their time responding to the pandemic during the months in question. He said many members of her staff worked seven days a week out of the State Emergency Operation Center to provide direct support to Iowans.

He did not immediately respond to a message Tuesday.

Reynolds said at a news conference in September 2020 that she believed the federal coronavirus relief law allowed salaries to be paid for workers whose job requirements were significantly changed due to the pandemic.

In November, a spokesman for the Treasury Office of Inspector General told The Associated Press that the office had not initiated an audit of the governor’s office salaries and was awaiting “resolution of this matter between the Iowa State Auditor and the Governor’s Office.”

Rich Delmar, deputy inspector general in the Department of the Treasury, said the state auditor “will assess the adequacy and sufficiency of supporting documentation as part of its audit.” He said the auditor may review additional documentation to determine if it is sufficient to uphold the spending.

Sand concluded after receiving documentation from the governor’s office that the money should be returned.

Delmar did not immediately respond to a message Tuesday.

Sand said during his review of the state’s payroll system that it was unclear why Reynolds had to take federal money to pay the salaries.

In December 2020, Reynolds had to return $21 million in COVID-19 relief money after using it to upgrade an outdated state information technology system; U.S. Treasury officials determined the payments were not allowed expenditures under the federal Coronavirus Aid, Relief, and Economic Security Act.