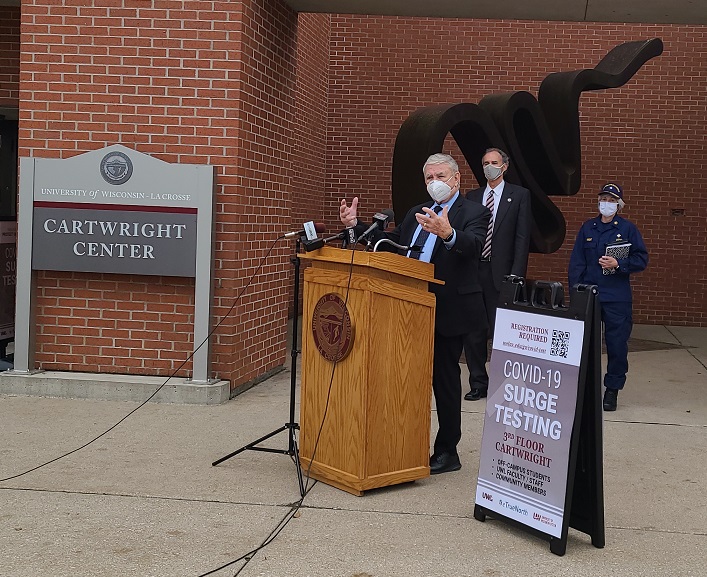 FILE - UW System President Tommy Thompson at UW-La Crosse at a news conference back in November of 2020 about UW-La Crosse's COVID-19 testing facility.

It looks like University of Wisconsin colleges won’t have a mask mandate when they come back to classes after spring break — at the latest.

That was the message Wednesday from UW, with System President Tommy Thompson in discussions with chancellors to end the mandate as soon as March 1 but no later than spring break.

Thompson noted widespread vaccinations, as well as decreasing case numbers on campuses and across Wisconsin in justifying the move. Vaccines and tests will remain available on campus.

The University of Wisconsin-Madison is planning to end its mandate March 12, which is the beginning of spring break.

The student’s government body, Associated Students of Madison, however, isn’t on board.

It issued a statement saying the mandate should remain in place until the spring semester ends to protect members of the university community who are particularly vulnerable to COVID-19 and can’t engage in in-person academics without masks.

The news comes as Wisconsin has seen a decline in COVID-19 spread. Monday, the state got below an average of 2,000 new cases a day for the first time since Nov. 2, 2021.

The latest numbers show Wisconsin averaging 12 deaths and 1,629 cases per day over the past week.

Wednesday, the Wisconsin’s health department noted that 55 counties had moved from the critically high category to “very high.” for disease activity. Only one county remains “critically high.”