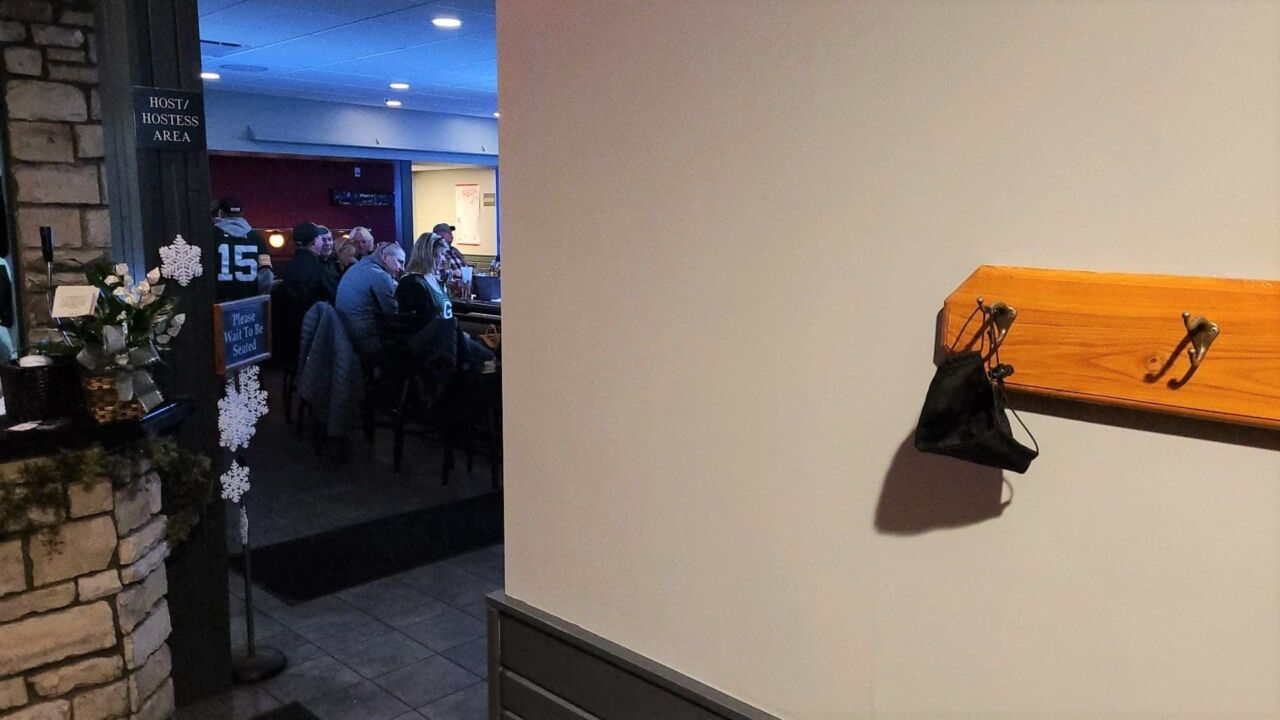 FILE - A lone masks hangs on a coat hook, while a bar is packed with maskless customers watching the Packers beat the Rams in the playoffs on Saturday, Jan 16, 2021.

As the omicron wave of the coronavirus subsides, several U.S. states including Nevada, New York and Illinois ended mask mandates this week for indoor settings, while others lifted requirements at schools.

The White House says talks are underway about how and when to move the country out of the emergency phase of the pandemic, but in the meantime people are advised to keep following guidance from the U.S. Centers for Disease Control and Prevention recommending mask use in indoor settings in places with high transmission rates.

Here’s a look at what happened with mask rules this week:

WHY ARE MANY PLACES LIFTING MANDATES NOW?

Mainly it’s the drop in hospitalizations and case counts, even in states that have enacted the most stringent rules. This week’s epidemiological report from the World Health Organization showed that case counts fell 50% in the United States and 17% worldwide. Across the U.S., COVID-19 hospitalizations have dropped nearly 30% over the past three weeks.

Others have cited the protections offered by vaccines as well as the increased availability of at-home testing kits and therapeutics for those who catch the virus.

The risk has also fallen dramatically for health care workers, many of whom have either been exposed to the virus or are fully vaccinated and boosted, said Dr. Craig Spencer, a New York City emergency room physician. He said medical workers have been dealing with COVID long enough that treating it has become “run-of-the-mill,” akin to dealing with heart attacks or other conditions typically seen in an ER.

“Honestly, for us right now, COVID isn’t hard to treat. We know what to do,” Spencer said. “With this latest wave, we haven’t seen a huge amount of severe disease, and those we do see, we have gotten so much better at managing it.”

Even so, the head of the WHO issued a warning Wednesday stressing that “COVID isn’t through with us,” although its focus was more on vaccinations than masks. There’s also a new urgency in finding ways to protect up to 7 million Americans with severely weak immune systems who are at greater risks as mask mandates fall.

WHERE ARE MASK RULES EASING?

Nevada on Thursday became the latest state to end indoor mask mandates, following announcements the previous day in New York and Illinois, though school mandates remain in those states.

Nevada Gov. Steve Sisolak said the requirement for masks in public places would be lifted “effective immediately.” State casino regulators quickly followed with an order eliminating the mandate for casinos “unless a local jurisdiction still imposes such a requirement.”

Sisolak said he knows some people think it’s too early to lift the mandate, but he said school districts and employers may still set their own policies.

New York Gov. Kathy Hochul said infection rates have declined to a level where it is safe to rescind the broader mask order, and the state will revisit in early March whether to continue requiring them in schools.

Illinois Gov. J.B. Pritzker said that state’s indoor mask requirement will end Feb. 28 assuming a continued drop in hospitalizations — which his office said are declining faster than at any point in the pandemic.

Not everyone is following suit. The mayors of Minneapolis and St. Paul, Minnesota, said they will soon end vaccine-or-test requirements instituted last month for restaurants, bars and other entertainment venues, but neither has talked about scrapping mask mandates.

Washington Gov. Jay Inslee said a mandate for large outdoor events will be lifted next but indoor requirements will remain for now: “I agree with CDC that today is not the day to totally eliminate masks, but it is a day that is rapidly approaching.”

About a dozen states require face coverings in schools. At least six of them said this week they plan to lift statewide mandates this month or next.

New Jersey Gov. Phil Murphy, who last month reinstated a public emergency due to the omicron wave, said the end of his state’s mandate on March 7 represents “a huge step back to normalcy for our kids.” Individual school districts can still make their own decisions.

Connecticut, Delaware, Massachusetts, Oregon and Rhode Island have made similar announcements on easing restrictions for schools.

Hemi Tewarson, executive director of the National Academy for State Health Policy, said states rescinding or relaxing school mask mandates is a reflection of the country’s desire to move to the next phase of the pandemic after roughly two years. It’s also a sign of progress, she said, from vaccine availability to finding ways to safely return to in-person schooling.

“You see this hope,” Tewarson said. “I think we all hope we are on the other side right now.”

Pritzker and Illinois health officials said they want masks to be mandatory in schools for a while longer because of the potential “spillover” effect: At any given school, you might have hundreds or thousands of young people, who are vaccinated at lower rates than adults, coming together for six to eight hours a day, five days a week, and then going back out into the community — including sometimes coming into contact with vulnerable family members. That could increase community spread and force schools back online.

“Nobody wants kids to be back in remote learning,” said Dr. Emily Landon, executive medical director of Infection Prevention and Control at University of Chicago Medicine.

WHAT DO THE WHITE HOUSE, SCIENTISTS AND HEALTH OFFICIALS SAY?

The CDC has not changed its recommendation that people mask up in indoor public settings in areas where there is high transmission.

Last month it updated its guidance to recommend N95 or KN95 masks — those used by health care workers — rather than cloth ones. N95s have a tighter fit and are made with material designed to block 95% of harmful particles. Their fibers are pressed close together and have an electrostatic charge that attracts molecules to stick to the mask rather than passing through.

The CDC added that it’s most important to pick something you’ll wear consistently — any mask is better than no mask. Masks are generally not necessary in most outdoor settings.

Press secretary Jen Psaki acknowledged that people are tired of masks and “we understand where the emotions of the country are,” but said the administration is following the advice of medical experts who rely on scientific evidence: “That doesn’t move at the speed of politics; it moves at the speed of data.”