US Sen. Ron Johnson not fighting to bring South Carolina jobs to Wisconsin 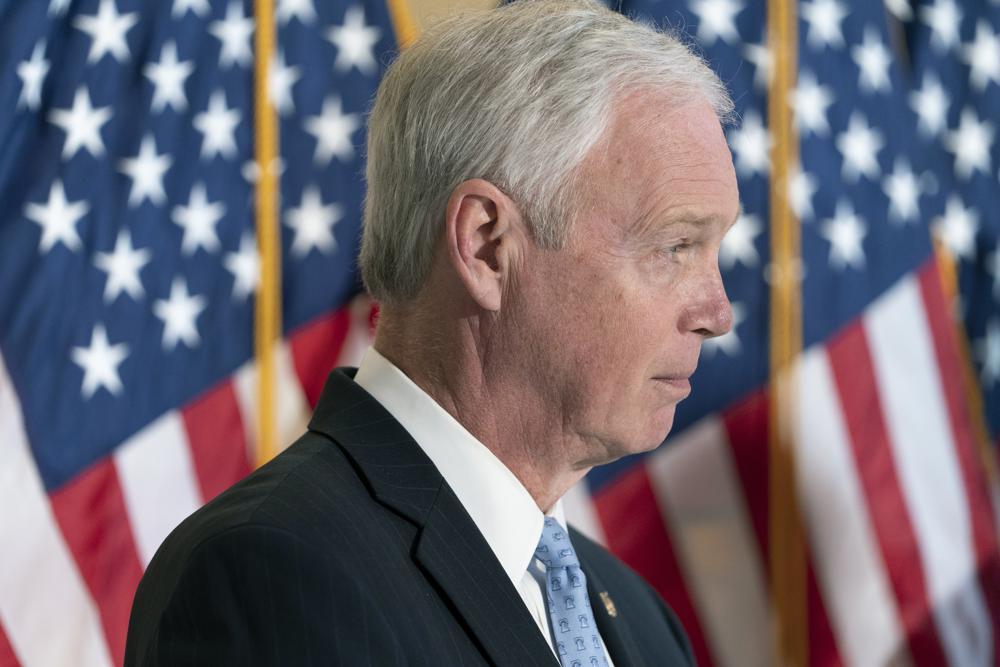 FILE - Sen. Ron Johnson, R-Wis., attends a news conference Feb., 2, 2022, on Capitol Hill in Washington.Sen. Johnson said he's not fighting to persuade Oshkosh Defense to locate 1,000 jobs in Wisconsin rather than South Carolina, providing an opening for his Democratic challengers to accuse the two-term incumbent of being out of touch with the needs of his state. Johnson told reporters at a news conference Saturday Feb. 5, 2022. (AP Photo/Jacquelyn Martin File)

MADISON, Wis. (AP) — Republican U.S. Sen. Ron Johnson said he’s not fighting to persuade Oshkosh Defense to locate 1,000 jobs in Wisconsin rather than South Carolina, providing an opening for his Democratic challengers to accuse the two-term incumbent of being out of touch with the needs of his state.

Johnson told reporters at a news conference Saturday that he was not trying to get Oshkosh Defense to put the jobs in his hometown of Oshkosh as part of a multibillion-dollar contract the company won last year to build new delivery vehicles for the U.S. Postal Service.

The company announced in June that the vehicles would be built in Spartanburg, South Carolina.

“It’s not like we don’t have enough jobs here in Wisconsin,” Johnson said Saturday. “The biggest problem we have in Wisconsin right now is employers not being able to find enough workers.”

Johnson also said that he “wouldn’t insert myself to demand that anything be manufactured here using federal funds in Wisconsin.”

“Obviously, I’m supportive of it,” he said. “But in the end, I think when using federal tax dollars, you want to spend those in the most efficient way and if it’s more efficient, more effective to spend those in other states, I don’t have a real problem with that.”

His top Democratic rivals were dumbfounded at his comments.

“Once again Ron Johnson has turned his back on Wisconsinites,” Lt. Gov. Mandela Barnes said in a recorded statement on Twitter. “If Ron Johnson won’t rebuild the middle class, we’re going to do the work for him.”

Barnes on Monday sent letters to Oshkosh Defense, President Joe Biden and members of Congress asking that the trucks be built in Wisconsin. When asked at a news conference why Wisconsin should go after the jobs despite existing problems with worker shortages, Barnes said: “I’ve never heard that take before.”

“Why limit ourselves?” he asked.

“A U.S. Senator should fight tooth and nail to bring good jobs and taxpayer dollars back to our state, instead, he’s just giving up,” she said in a statement.

Alex Lasry, who is on leave from his job as an executive with the Milwaukee Bucks, said in a statement that Johnson’s comments were “just another example of how out of touch he is with Wisconsinites.”

Tom Nelson, the county executive in neighboring Outagamie County, said the 1,000 jobs would have a multiplier effect leading to even more jobs in the region.

“Wisconsin’s biggest problem is Ron Johnson,” Nelson said Monday. “This is one more reason we must do everything we can to defeat him. We need a senator who will stand up and fight for Oshkosh and Wisconsin’s working families each and every day.”

Johnson responded Monday and said his comments, in which he voiced support for Oshkosh Corp. while also saying he wasn’t going to get involved, had been taken out of context.

“The Biden administration and Democrat policies have left this country with supply chain issues and a worker shortage crisis,” Johnson said in a statement. “We need less government interference, not more. For months, as I have traveled around the state every business owner I speak with tells me they cannot find enough workers, even causing businesses to adjust hours or shutter their businesses all together.”

Barnes, Godlewski, Lasry and Nelson are among a crowded field of Democrats who will square off in the Aug. 9 primary to face Johnson in November.

Oshkosh’s decision not to build the vehicles in Wisconsin has drawn blowback from Wisconsin’s other senator, Democrat Tammy Baldwin, as well as U.S. Sen. Gary Peters, a Democrat from neighboring Michigan. They, along with unionized workers in Oshkosh, have been working to persuade the company to locate the jobs in Wisconsin.

Baldwin and Peters sent Oshkosh Defense officials a letter in November asking for more information about its plans to build the trucks in South Carolina. Oshkosh Defense will build 50,000 to 165,000 van-like vehicles during the next 10 years, replacing a fleet that is up to three decades old.

“It’s my job to support job creation in Wisconsin and I want the trucks built here,” Baldwin said in a statement. “To me, it’s simple — I want Oshkosh Defense to manufacture trucks in Oshkosh with Wisconsin workers.”