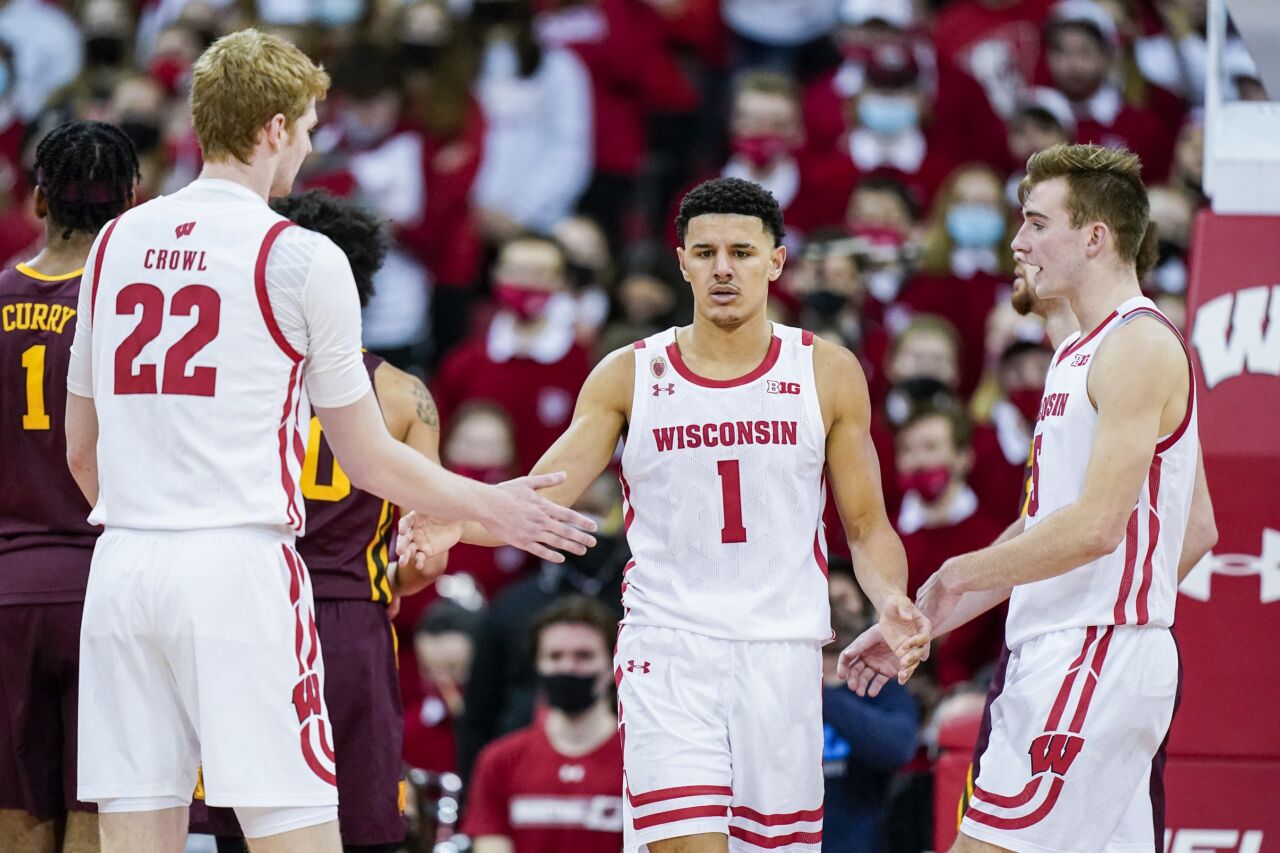 MADISON, Wis. (AP) — Expected to take a step back this season. Wisconsin instead has made a major leap forward.

Wisconsin (17-3, 8-2) is ranked 11th and heads into February sharing the Big Ten lead with No. 18 Illinois (15-5, 8-2). which hosts the Badgers on Wednesday night. That’s quite an accomplishment for a team that had to replace four of its top five scorers from last season.

“The Wisconsin standard is we want to compete to win the Big Ten,” guard Brad Davison said. “That’s always our expectation, being in this program. We knew how much talent we had in the gym.”

A year ago the Badgers were ranked as high as fourth in the Top 25 but ended up tying for sixth in the Big Ten with a 10-10 conference record. The season ended with a second-round NCAA Tournament loss to eventual national champion Baylor.

The most obvious change is the progress of sophomore Johnny Davis — the La Crosse native who came off the bench last season but has developed into a candidate for national player of the year honors.

“I never would have thought I would have been in this position,” said Davis, who is averaging 21.1 points to rank eighth in Division I. “But here I am now. I think that’s just a way of giving myself credit for all the hard work I’ve put in to get to this point.”

Davis leads a group that’s a little different from the typical Wisconsin team. It’s younger than usual with five freshmen and seven sophomores. The Badgers also are playing at a slightly faster pace.

Wisconsin has an adjusted offensive tempo of 66.9 possessions per game according to KenPom, the college basketball statistics site. That only ranks 199th out of 358 Division I teams, but it’s the fastest pace for Wisconsin since KenPom started tracking the statistic in 2001-02.

“It’s like baking a cake,” coach Greg Gard said. “What ingredients do you have available? We have a lot of ingredients in terms of this team, and they can do a lot of different things.”

An improved Davis certainly has helped the Badgers’ fortunes. Improved chemistry also has made a difference.

Of the seven seniors on Wisconsin’s 2020-21 roster who had an opportunity to return this season due to the pandemic, only Davison came back. That was part of a turbulent offseason that included the release of secretly recorded portions from a Feb. 19 team meeting in which some of those now-departed seniors criticized Gard.

There haven’t been any such issues this season. Gard says he knew early on this would be a very coachable group.

Davison said this team has benefited from the ability to do more off-court activities together after dealing with so many pandemic-related restrictions last season. That chemistry has helped the Badgers work through plenty of adversity.

Chucky Hepburn, a freshman guard from Omaha, Nebraska, returned to his home state last week for a victory over Nebraska less than a week after longtime friend Vincent Burns was shot to death in his hometown. Hepburn said after the game that “when you have good support around like this team, they help you get through.”

“It’s another testament to the quality of the people we have in the program, specifically our players and the backgrounds they come from,” said Gard, whose mother is undergoing breast cancer treatment. “They understand through the whole recruiting process this is way bigger than basketball because of times like what you’ve seen happen.

“The basketball’s an important part of it, and that’s obviously at the front end of their brain when they’re 16, 17, 18, making those decisions. But as life unfolds for them and evolves for them, they realize there’s other things that will take higher priority and have more importance.”

Their ability to get along with one another also has made a difference on the court. Wisconsin is 10-1 in games decided by six points or fewer after going 3-6 in those situations last season.

All those close wins show that Wisconsin doesn’t have much margin for error. The Badgers’ home loss to No. 15 Providence without Davis and road setback at No. 13 Michigan State w ithout Wahl exposed their relative lack of depth.

But the fact that Wisconsin has lost only one game while at full strength shows what this team also could accomplish if it keeps improving.

“The difference between good teams and great teams now – winning the Big Ten or just being in contention – is getting better every day,” Davison said. “Everyone gets the same amount of time each day, the same amount of practices. You’ve got to make the most of them.”