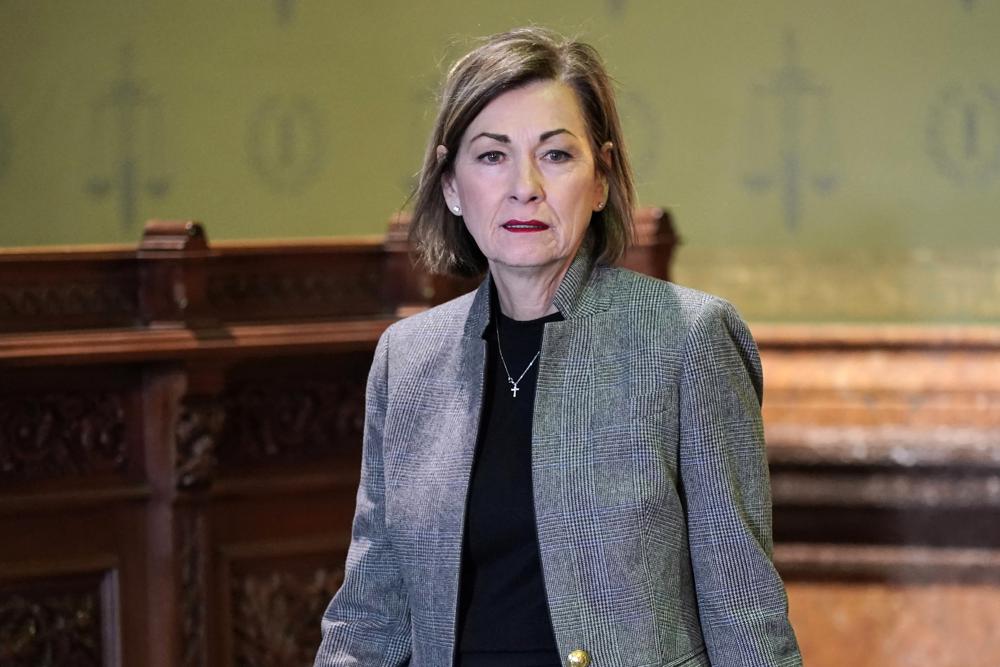 FILE - Iowa Gov. Kim Reynolds arrives to speak at the Iowa Capitol Press Association's legislative seminar, Jan. 4, 2022, at the Statehouse in Des Moines, Iowa. A federal appeals court on Tuesday, Jan. 25, 2022 allowed the state to enforce a law that prevents local schools from imposing mask mandates, but the court also allowed a group of parents of disabled children to pursue a lawsuit that seeks to strike down the law. (AP Photo/Charlie Neibergall, File)

DES MOINES, Iowa (AP) — A federal appeals court on Tuesday allowed the state of Iowa to enforce a law that prevents local schools from imposing mask mandates, except for schools attended by students whose disabilities make them more vulnerable to severe illness if they get COVID-19.

The court found that a mask requirement is a reasonable accommodation for students with such disabilities and allowed a group of parents of disabled children to pursue a lawsuit that seeks to strike down the law.

Two members of a three-judge panel of the 8th U.S. Circuit Court of Appeals in Omaha found a previous federal judge’s decision to issue an injunction that blocked the state ban on mask mandates was too broad because it applied to all schools. The court sent the case back to the judge to narrow the injunction to apply to the 10 school districts the students attend.

“The issues presented by plaintiffs involve a discrete group of students: those whose disabilities require accommodations in the form of mask requirements in order to safely be present in their schools,” the court wrote. “To remedy plaintiffs’ injury, an injunction is necessary only as applied to their schools and districts.”

The judges sided with the parents and a disability rights group in concluding that their lawsuit can proceed in federal court denying motions by Iowa Gov. Kim Reynolds and Iowa Department of Education Director Ann Lebo to dismiss the case.

The panel found the parents likely will succeed because mask requirements constitute a reasonable modification and schools’ failure to provide this accommodation likely violates the federal Rehabilitation Act.

The parents, backed by the American Civil Liberties Union and disability rights organizations, filed the lawsuit in September 2021 against Reynolds and Lebo that sought to strike down the law that bans schools from requiring masks.

“This decision is an enormous victory for students with disabilities across Iowa,” said ACLU of Iowa Legal Director Rita Bettis Austen.

The Iowa attorney general’s office, which represents Reynolds and Lebo, will ask the full 8th Circuit Court to hear hear the case, a spokesman said.

“The decision doesn’t take effect immediately. The district court’s injunction of the Iowa statute remains in place statewide — and the state will still not be enforcing the statute — until the case returns to the district court. That will likely not happen for at least 21 days, which gives time for the state to seek rehearing of the appeal by the entire 8th Circuit,”

The decision was signed by Judges Jane Kelly, a Barack Obama appointee, and Duane Benton, appointed by George W. Bush.

Judge Ralph Erickson, a Donald Trump appointee, dissented saying he would not have allowed the case to proceed. He contended the parents had not exhausted other avenues for challenging the law before filing a federal lawsuit.

“This case is about children’s ability to receive instruction while attending school. Courts should not act so quickly to intervene in the resolution of conflicts which arise in the daily operation of school systems,” he said.

The lawsuit involves children who are too young to be vaccinated and have disabilities that make them susceptible to potentially severe COVID-19 cases. Their parents argue the law effectively excludes them from in-person learning in violation of the Americans with Disabilities Act and the Rehabilitation Act.

The decision comes as the rate of Iowa COVID-19 spread reached an all-time high and hospitalizations were at the highest level since early December 2020. The omicron variant has resulted in more infected children being hospitalized, with the most recent state data showing 32 children under age 17 in hospitals. All but six are unvaccinated.

On Sunday, Mormon Trail Schools in southern Iowa announced that its superintendent “lost his battle with COVID.”

Kerry Lee Phillips, 61, died at Mercy Hospital in Iowa City. Most of the district is in Wayne County and Decatur County, which have the second and third lowest vaccination rate in Iowa. The Centers for Disease Control and Prevention data shows that in the two counties about 56% of the population remains unvaccinated.

The district’s return to learn plan for the year says masks are not required.