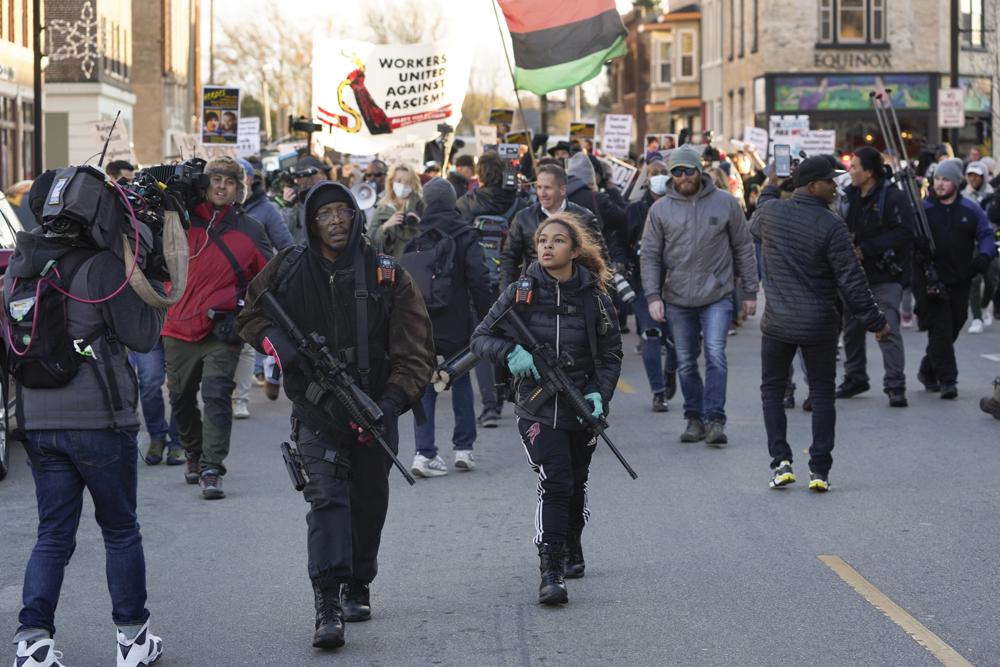 MADISON, Wis. (AP) — The Republican-controlled Wisconsin Assembly approved a bill Tuesday that would create tougher penalties for protesters who participate in riots and deface public statues.

The proposal comes after protesters burned swaths of downtown Kenosha and damaged the Hans Christian Heg and Lady Forward statues at the state Capitol during demonstrations in the summer of 2020.

The protests figure to be a key talking point for Republicans as they try to paint Democrats as soft on crime on the campaign trail this year. U.S. Sen. Ron Johnson has already accused Democratic Gov. Tony Evers and Lt. Gov. Mandela Barnes, who is running to unseat Johnson this fall, of not acting quickly enough to stop the protests in Kenosha and spurring on protesters.

The bill would define a riot as a public disturbance that involves an unlawful assembly and an act of violence or a threat of violence committed by at least one person.

The Senate passed the bill on a voice vote after removing the mandatory minimum sentences. The Assembly concurred hours later on a 59-34 vote despite Democrats’ complaints that language is vague, peaceful protesters could be exposed to criminal liability and the proposal would stifle free speech.

“Protest is democracy,” Rep. Francesca Hong said. “This bill brought forward today by my friends across the aisle is a declaration of war against the First Amendment.”

Republicans pointed to the destruction in Kenosha and at the Capitol as justification for the proposal. Rep. Barbara Dittrich said the bill is necessary because people can’t act “civilized.”

“This behavior has got to stop,” she said. “People deserve to feel safe in their workplace and in their homes without the physical threat of violence.”

The bill now goes to Evers, who can sign it into law or veto it.

The Assembly planned to vote later Tuesday on another bill that would make damaging or defacing government property of historical significance a felony punishable by up to three-and-a-years in prison. Damaging historical state property is already a felony under state law but the property must be included on a Department of Natural Resources registry of prominent landscape features to qualify.

The bill’s chief Senate sponsor, Andre Jacque, said in written remarks to the Assembly criminal justice committee earlier this month that he’s heard from “countless outraged constituents” about the damage done to the Heg and Lady Forward statues.

“There shouldn’t be license to destroy public property and to cause damage through civil unrest,” Jacques wrote.

Evers’ spokeswoman, Britt Cudaback, didn’t immediately respond to a message inquiring about his stance on either bill. The American Civil Liberties Union, the city of Milwaukee and government watchdog groups Common Cause in Wisconsin and Wisconsin Democracy Campaign have all registered in opposition of the riot penalties bill. No groups have registered in support or opposition of the statue bill.

The summer of 2020 was marked by multiple protests across the country in response to the death of George Floyd, a Black man who died May 25, 2020, after a white Minneapolis police officer knelt on Floyd’s neck for 9 1/2 minutes.

In August 2020, a white police officer shot Jacob Blake, a Black man, after he resisted arrest during a domestic disturbance in Kenosha. The shooting left Blake paralyzed from the waist down.

Evers commented hours after the shooting that Blake wasn’t the first Black person who has been “shot or injured or mercilessly killed at the hands of individuals in law enforcement.” Several nights of protests ensued, marked by burning buildings and looting. Evers was forced to call in the National Guard.

Kyle Rittenhouse shot three protesters during one of the demonstrations, killing two of them. He argued he fired in self-defense after the three men attacked him; a jury acquitted him of homicide charges late last year. Everyone involved in the shootings was white.

Protests erupted in Madison two months before Blake was shot after police arrested a Black man for shouting at restaurant customers while brandishing a baseball bat. Two women were charged with assaulting Sen. Tim Carpenter on the Capitol lawn and protesters tore down the Heg statue and damaged Lady Forward.

Heg was a Wisconsin abolitionist who was killed fighting in the Civil War; Lady Forward is a sculpture of a woman symbolizing the state’s “Forward” motto. Both statues were repaired and restored to their podiums this past September.