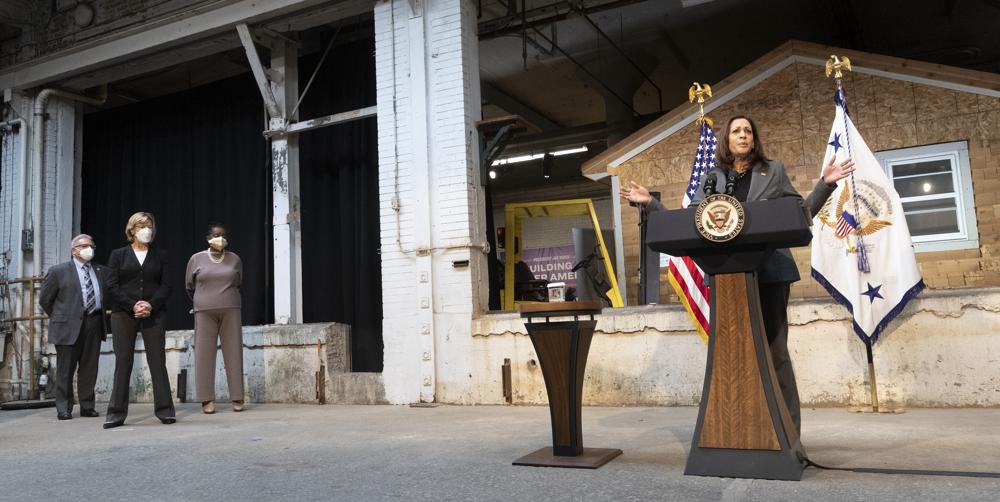 MADISON, Wis. (AP) — Vice President Kamala Harris said Monday in Milwaukee that removing and replacing lead pipes is a moral imperative and must be one of the nation’s highest priorities, pointing to the environmental and health risks lead exposure presents from children to the elderly.

“We are long overdue to get this done and we will get this done and generations of Americans will forever benefit because of the work that is being done right here in Milwaukee,” Harris said in comments delivered at the Wisconsin Regional Training Partnership/BIG STEP program in west Milwaukee.

“Eliminating lead exposures in our nation must among our nation’s highest priorities,” Harris said.

Harris also met with community and health leaders as well as union members who are working to replace lead pipes. One of those she met with, Milwaukee lead activist Deanna Branch, showed her a picture book drawn by her son featuring the “lead monster.” Her son suffers from lead poisoning and Branch said he was hospitalized twice because of it.

“It means a lot to me and my community that I am hearing and talking to you on their behalf,” Branch told Harris.

Harris told Branch, “You put the call out and it was heard.”

The Biden administration announced a plan last month to remove or replace all lead pipes over the next decade. However, Congress approved $15 billion for lead service line replacement in the infrastructure bill — about a third less than what the White House and water experts say it would cost to replace them nationally.

Of that, $48 million is being sent to Wisconsin as part of $3 billion coming to states this year, the EPA previously announced. In Milwaukee alone, Wisconsin’s largest city, the cost to replace lead pipes on all public and private property is estimated to be $800 million.

“This funding is a welcome relief after years of advocacy,” Branch said. “But we also know that is not enough. We need more to replace the 70,000 lead pipes that are still in Milwaukee and the many, many more across the country.”

The White House estimates between 6 million and 10 million U.S. households and 400,000 schools get water through lead service lines, which connect buildings to the water main and can leach particles of the neurotoxin into drinking water and potentially cause severe developmental and neurological issues — especially when consumed by children. In recent years, the risks facing cities with lead service lines have come into focus, most notably after the Flint, Michigan, water crisis.

The visit by Harris to Wisconsin is her latest across the country to promote the infrastructure law. In her only previous stop in Wisconsin in May, Harris touted clean energy labs on the University of Wisconsin-Milwaukee campus.