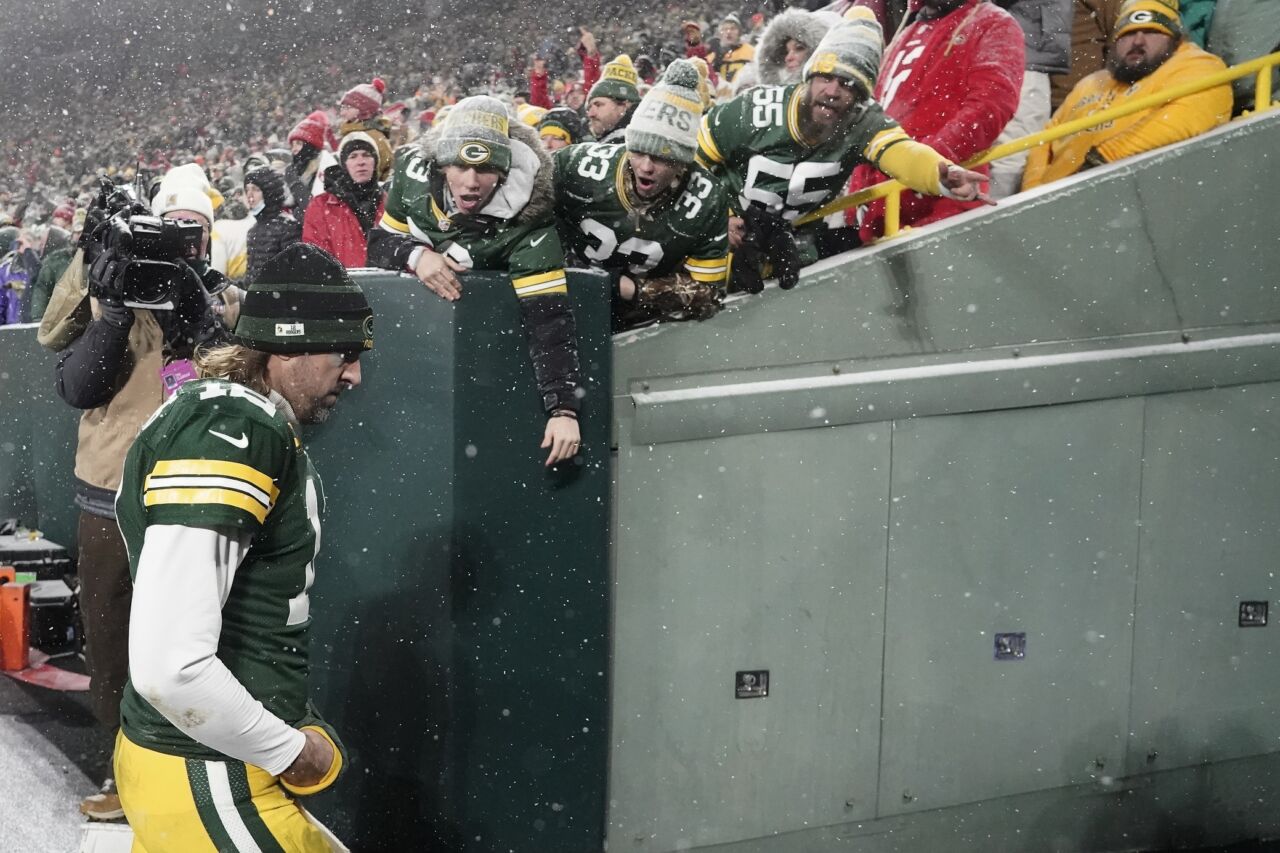 On a field littered with snow flurries, Gould made a 45-yard field goal Saturday night as time expired that knocked off the top-seeded Packers 13-10 and possibly ended Aaron Rodgers’ tenure in Green Bay.

Gould has made all 20 of his career playoff field-goal attempts. His latest helped the 49ers complete an improbable comeback by scoring 10 unanswered points in the last five minutes.

The 49ers (12-7) continued their postseason hex on Rodgers and advanced to an NFC championship game matchup Jan. 30 at either the Tampa Bay Buccaneers (14-4) or Los Angeles Rams (13-5). Those teams play Sunday in Tampa.

San Francisco’s win, coupled with the Cincinnati Bengals’ 19-16 victory over the Tennessee Titans earlier in the day, marked the first time both No. 1 seeds lost in the divisional round in the same season since 2010. Green Bay won at Atlanta and the New York Jets won at New England that season.

Rodgers went 19 of 25 for 221 yards and dropped to 0-4 in career playoff starts against the 49ers. He’s the first quarterback in NFL history to lose four playoff starts to a single opponent.

He now enters an uncertain offseason. After skipping the Packers’ mandatory minicamp in a standoff with management, Rodgers said he was uncertain whether this would be his last year in Green Bay. Rodgers said last month he was keeping all options open.

“I don’t think it’s fair to anybody or myself to really go down those paths at this point,” Rodgers said. “It’s disappointing, sad and fresh. I’ll have conversations in the next week or so and start to contemplate after that.”

The Packers (13-5) earned the NFC’s top seed for a second straight season and were the league’s only unbeaten team at home, but again failed to reach the big game. They haven’t made it to the Super Bowl since their 2010 championship season.

“I just didn’t envision it like this,” said Green Bay’s Aaron Jones, who had nine catches for 129 yards and 12 carries for 41 yards.

San Francisco tied the game with 4:41 left thanks to a breakdown by Green Bay’s special teams, the Packers’ biggest weakness all season.

GREEN BAY PACKERS
Gould’s FG on final play gives 49ers 13-10 upset of Packers
Rodgers enters uncertain offseason after short postseason
Bengals, 49ers stun top seeds to make conference title games
Packers won’t have OT Bakhtiari for playoff game with 49ers
Jordan Willis’ outstretched left hand blocked a punt by Corey Bojorquez, who was kicking from the front of his end zone. Talanoa Hufanga picked up the ball at the 6-yard line and ran it in to make it 10-10.

After the Packers went three-and-out, the 49ers got the ball back at their 29 with 3:20 left and drove into field-goal range. Deebo Samuel delivered a 9-yard run on third-and-8 from the Green Bay 38, and the 49ers ran down the clock to set up Gould.

A.J. Dillon’s 6-yard touchdown run capped a 69-yard drive on the game’s opening possession that put the Packers ahead 7-0. Green Bay’s offense didn’t do much of anything after that.

Well before that blocked punt, San Francisco’s Jimmie Ward blocked a 39-yard field-goal attempt from Mason Crosby on the final play of the first half, preventing the Packers from extending their lead to 10-0. The Packers also allowed Samuel to return the second-half kickoff 45 yards, setting up the 49ers’ first field goal.

San Francisco won by overcoming a brutal start from its offense. The 49ers had minus-10 yards in their first four series, three of which included third-down sacks. It was the first time the 49ers had opened a game with four straight three-and-outs since a 27-24 loss to the Minnesota Vikings on Sept. 27, 2009.

The 49ers didn’t get a single first down or pass completion until Garoppolo connected with George Kittle on a 15-yard gain with less than 6 ½ minutes left in the second quarter. Garoppolo was just 9 of 17 for 105 yards with an interception, but the 49ers still managed to win.

“It took everything,” Garoppolo said. “We knew it was going to. I mean, it was just offense, defense, special teams – everybody stepping up and doing their part. Wouldn’t have it any other way.”

The temperature at kickoff was 14 degrees with a wind chill of zero, making it the fifth-coldest playoff game in Lambeau Field history. The second half was played amid snow flurries.

The Packers were without OT David Bakhtiari, a 2020 All-Pro selection. Bakhtiari played 27 snaps in the Packers’ regular-season finale, which marked his first game since tearing his left anterior cruciate ligament on Dec. 31, 2000.

Billy Turner, playing for the first time since suffering his own knee injury on Dec. 12, started in Bakhtiari’s place.

49ers running back Jeff Wilson left with an ankle injury after the opening kickoff. Packers safety Darnell Savage (back) and running back A.J. Dillon (chest) left in the third quarter.

The 49ers will be at either Tampa or the Los Angeles Rams in the NFC championship game on Jan. 30.

The Packers’ season is over. Will Rodgers be back with the Pack?