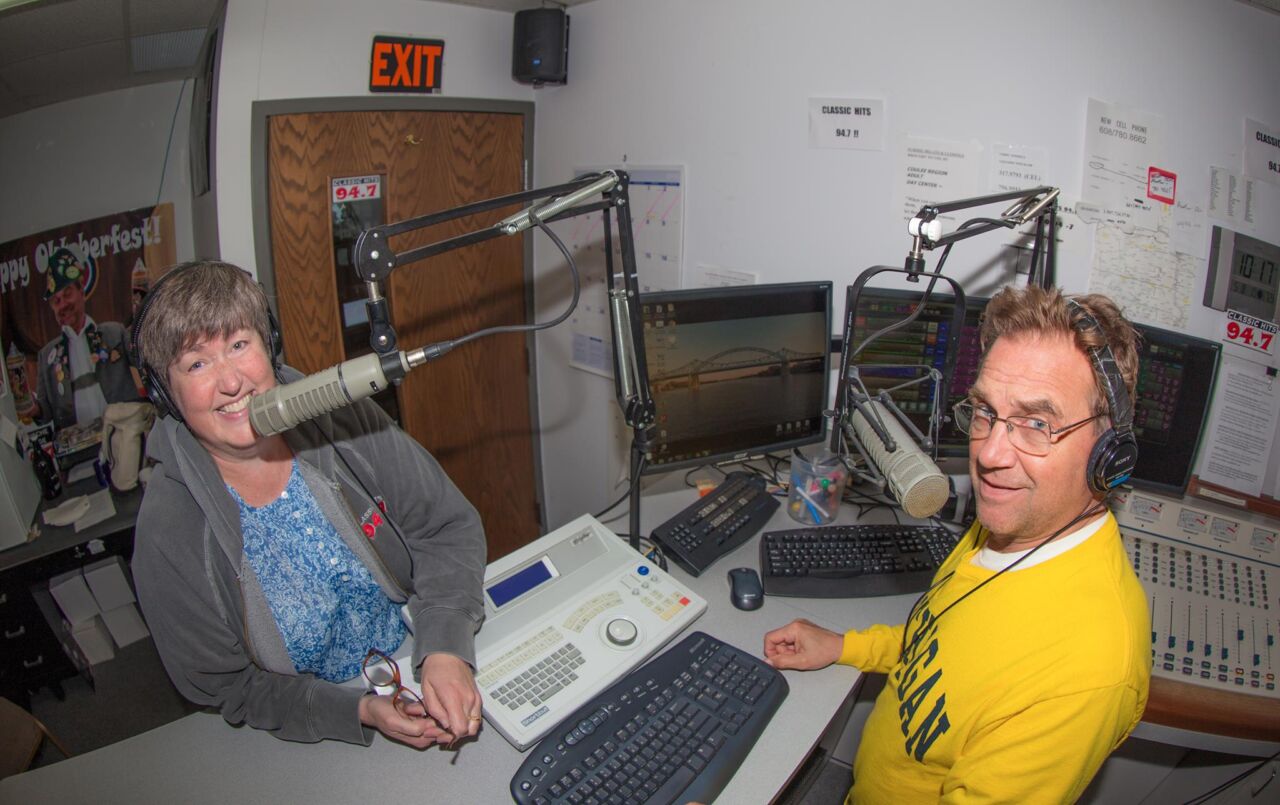 It really wasn’t supposed to work, this odd pairing, for anyone who knows Sam Strong and Keith Carr — the morning duo on Classic Hits 94.7.

The two started together Feb. 8, 1990 on Z93 in La Crosse. Thursday, Strong retires, after 32 years paired up with Carr in what Paula Abdul would call “Opposites Attract” — whether that’s a Z93 or Classic Hits song, is anybody’s guess.

“We started together, and I think it was like two weeks later, she walked into Dick Record’s office — he was then the GM — and said, ‘I don’t think I can work with this guy. He’s nuts!’” Carr recalled. “Well, 33 years later, guess what?”

Strong wasn’t the only one that felt that way.

“I thought it was a stupid idea, but it worked,” Record said with a laugh. “Somebody came along and said, ‘You know those two ought to be together.’ And we were looking for somebody for the mornings. I bought the story and we put them together and the rest is history.”

Of course, they were both wrong and Carr was right.

“He’s a delightful human,” Strong said of her on-air husband. “As quirky as he may appear on the air, he’s way quirkier in real life. Dick says that he’s either well-liked or misunderstood, which I think is an accurate assessment of how people react to Keith.”

Strong leaves behind a legacy of activism in the La Crosse community — and beyond.

“Her community impact is the biggest thing,” Jen O’Brien, Mid-West Family’s VP of Innovation, who was hired by Strong to work on Z93 years ago, said. “For decades, involved in the community, reading to students, hosting fashion shows and emceeing events. There isn’t an organization that she probably hasn’t helped in some way shape or form.”

Strong recalls helping collect goods for flood victims in Fargo in the early 2000s. They ended up with a ridiculous amount of donations — three semi loads.

“People were just so generous and it made me cry,” Strong said. “And, so whenever they send me out to one of those things where we’re collecting food donations or toy donations or something like that, I always cried and they always make fun of me because people are out here so generous.

“So, that’s one of the delights, is crying.”

While her activism will be missed throughout the community — though she will most likely still be volunteering for the cause — she’ll be missed for simply being her at Mid-West Family.

“Sam is the kind of person where, if you’re having a bad day, just go talk to Sam for a few minutes and suddenly everything’s better,” Mid-West Family GM Brian Jackson said. “You forget about it because she’s never not in a great mood. She’s never not smiling. She’s never not having fun. So, not having that presence around, will definitely be a loss for us.”

Three decades on the air, Strong had a lot of interesting stories about famous artists she’s interviewed, introduced. Her favorite, “Weird Al” Yankovic.

“He’s super smart and interesting and he’s very present, in the moment” Strong said. “So, you can ask him pretty much anything and he’ll tell you, and he’ll describe the challenges of getting permission to use the songs. And most of the people will let him because “Weird Al,” how could you not? He’s awesome.”

There were others, too — both good and bad.

“Obviously, George Carlin, another comedian,” Strong said. “He was very intense. I expected him to be more relaxed. He was not relaxed.

“I’ll tell you the person that gives me the bad heebie-jeebies after interviewing them, and that’s Howie Mandel. That guy is just bizarre.”

Keith and Sam in the mornings also lived with the music — moving from Z93 to Classic Hits right with the songs.

“It is a bit strange because I can so vividly remember some of it, like when Def Leppard was on the Top 8 at 8 back in the day for months and months,” Strong said. “Or when Tiffany did a show at the La Crosse Center and The New Kids on the Block opened up for her. The phones just got flooded with — because I was working nights — with the teenagers asking for The New Kids on the Block, which I hadn’t heard because I didn’t go to the concert because I was working. This was before any of their hits hit the radio because they were opening for Tiffany.

“And now, if I ever play a New Kids on the Block song, I laugh about that and remember just the rapidity of the young fans who wanted to hear it. That makes me laugh.”

For the record, New Kids on the Block has yet to hit Classic Hits.

Mid-West Family’s VP of programming, Jean Taylor, pointed out how amazing this run on Z93 the first 17 years and the past 15 on Classic hits has been.

“It’s really remarkable that you would start a job and get paired up with a co-worker to create something that takes so much from both individuals to make this package, and then have it last and endure over all those years and different formats,” Taylor said. “And (to) have listeners literally grow up — from the back seat of their mom’s car — listening to Z93, to raising their own kids, listening to Classic Hits.

“I mean, you’re talking about generations that have listened to Sam Strong’s voice wake them up every morning from the time they were little, until they have their own kids.”

When asked how her partner will be with her gone, Strong spoke like a married person might after three decades.

Susie Carlson, a longtime salesperson at Mid-West, who’s worked with Strong for decades — in fact Strong introduced Carlson to her husband — describes the two perfectly.

“They were like yin and yang,” Carlson said. “Sam was to keep Keith in line, wasn’t she? Wasn’t that her job? Yeah, he was always throwing a curveball and she made it effortless, kind of either hitting it or redirecting it.”

The odd pairing worked perfectly. Getting into radio for Strong was, too, a little odd. She wanted to work in museums — and she’s happy that one of her children does now. She figured out, however, that it might not be the career for her and got this notion from her college days to try something else.

“I had done radio in college as a favor to my friend who had to fill schedules,” Strong said. “I had fun doing it, and thought, ‘Well, maybe I’ll see if I can do that.’ And sure enough, I ended up doing that and here I am all those years later.”

Strong touched countless people’s lives, both in person and through the airwaves. That includes numerous people at Mid-West Family. Here are just a couple:

Z93’s BRITTANY STYLES: I grew up listening to Sam on Z93. When I started working at Mid-West Family, almost 18 years ago, I was so excited to be working in the same building as the famous Samantha Strong. I aspired to be in her role on Z93 and wanted to be just like her. And although I ended up in her shoes, so to speak, it’s clear that she’s one of a kind, and irreplaceable. Sam is caring, loving, giving, incredibly talented, and I’m proud to call her a friend. It will be lonely without her in the building, and strange to not hear her legendary voice on the radio, but I wish her all the best in her well-deserved retirement. Sam is loved and cherished by many in our community, and always will be. She’s an icon.

MWF CHIEF INNOVATION OFFICER THEREASA TIMM: “As an up-and-comer to radio 30 years ago, I continued listening to Z93 and Sam, even though I didn’t sell her station. I worked across the street selling KQEG. I couldn’t WAIT to meet “THE SAMANTHA STRONG” when I was lucky enough to be ‘purchased’ by Family Radio, Inc. after deregulation! She was one of the very first people I met, and I was a bit star struck. For all of about 2 minutes — because she is not a ‘celebrity” in her mind — she’s just Sam and a really nice human, who put me at ease within my new surroundings, and who became a fast friend. She is the happiest person on the radio — why I love listening to her. You can actually hear her smile when she’s broadcasting. Taking any mood you might be having and swaying it to happy just because you’re listening to her.”

Z93’s TRACY BALLZER: “What to say about Sam. I’m sure that every single person will say how kind she is, which is absolutely true. She’s also incredibly open minded and non-judgmental. I’ve known Sam as a mentor, a co-worker, someone who’s worked for me and with me. She’s always been someone to say yes to helping others out, even when she thinks it’s a dumb idea. Above all of this, I’ve been blessed to have Sam as a friend. Sam has always been so supportive of me and my family. She’s one of my favorite people to see in the building and has given me some of the best advice on work and life. The only thing I dislike about Sam is that she makes me look bad for being such a well-rounded human being, doing it all with a smile.”