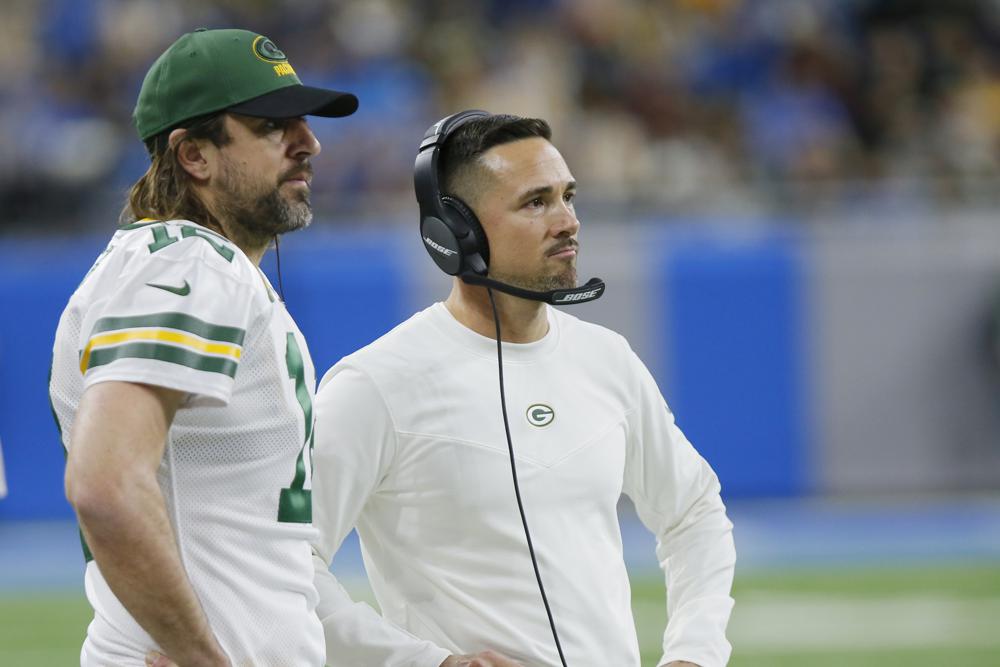 Green Bay Packers quarterback Aaron Rodgers and head coach Matt LaFleur watch from the sideline during the second half of an NFL football game against the Detroit Lions, Sunday, Jan. 9, 2022, in Detroit. (AP Photo/Duane Burleson)

DETROIT (AP) — Aaron Rodgers got off the field unscathed, giving Green Bay a win of sorts in a game it lost on the scoreboard.

Rodgers threw two touchdown passes in the first half and sat out the second half with nothing at stake as the Detroit Lions beat the top-seeded Packers 37-30 Sunday.

“The win obviously would be nice, but the most important thing was to get out there,” he said.

The NFC North champion Packers (13-4) rolled into the Motor City after already clinching the conference’s No. 1 seed and its only first-round bye.

“I might have a better perspective tomorrow,” Green Bay coach Matt LaFleur said. “We’re all competitors and we don’t like losing.

“I am happy in the fact that we got out fairly healthy.”

He threw a 1-yard pass to Allen Lazard to cap a 13-play, 74-yard drive that took 7:18 off the clock to open the game and a 29-yard pass to the fourth-year receiver late in the second quarter for another score.

Rodgers replaced his helmet with a baseball cap at halftime and watched the rest of the game from the sideline out of harm’s way after getting roughed up at times by the hard-charging Lions.

“I hold my breath every time he gets hit,” LaFleur said.

The Lions (3-13-1) closed coach Dan Campbell’s first season with plenty of pride and some nothing-to-lose plays.

With the win, though, Detroit lost a shot at having the No. 1 pick in the NFL draft that was possible because Jacksonville toppled Indianapolis.

The tricky Lions tied it 7-all late in the first quarter when seldom-used Tom Kennedy ended up with the ball on a reverse and threw a 75-yard touchdown pass to Kalif Raymond.

Detroit took a 24-13 lead early in the third on a reverse flea-flicker with Jared Goff throwing a 36-yard touchdown pass to Brock Wright.

“We wanted to empty the chamber,” Goff said.

Love threw a go-ahead, 62-yard touchdown pass to Josiah Deguara with 4:49 left in the fourth, but the Packers could not hold on for the win.

D’Andre Swift scored on a 14-yard run with 1:54 left to put Detroit back ahead.

C.J. Moore intercepted Love’s pass at the Green Bay 36 on the ensuing possessions after it was deflected by linebacker Jalen Reeves-Maybin, setting up Riley Patterson’s field goal to put the Lions up by a touchdown.

Green Bay’s Devante Adams had six catches for 55 yards, giving him a single-season franchise record of 1,553 yards receiving that Jordy Nelson set in 2014.

“He just texted me when I was walking in here right now,” Adams told reporters after the game, saying his former teammate congratulated him.

Detroit’s Amon-Ra St. Brown had eight receptions for 109 yards and a touchdown, setting team rookie records with 90 receptions and 912 yards. The fourth-round pick from USC closed the season with at least eight catches in six straight games, setting an NFL rookie record.

“He’s better than gold, and I’m glad we’ve got him,” Campbell said.

Packers: WR Marquez Valdes-Scantling left the game with a back injury. … OT David Bakhtiari, a 2020 All-Pro, started and played for first time since tearing his left ACL on Dec. 31, 2020 and having two surgeries. C Josh Myers started after getting removed from IR on Saturday. The rookie second-round pick from Ohio State had been out since had a knee injury on Oct. 17 at Chicago.

“Like I told (Bakhtiari) and Josh, there’s no substitute for football shape and it will be good for them to be out there,” LaFleur said.

Packers: practice, rest and prepare to play in two weeks.

Lions: begin offseason project of making changes on the roster and coaching staff.