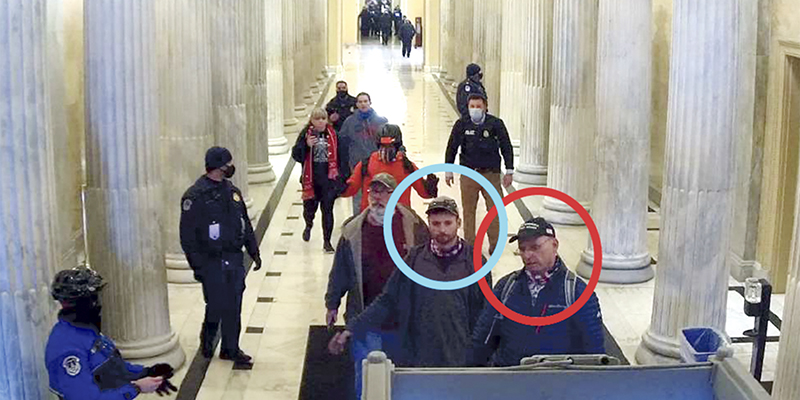 DES MOINES, Iowa (AP) — An Iowa man and his Minnesota son pleaded guilty to a charge of civil disorder in the Jan. 6, 2021, Capitol riot, admitting that the entered the building through a broken window and pushed through a police line once inside.

Both Daryl Johnson, 51, of St. Ansgar, Iowa, and Daniel Johnson, 29, of Austin, Minnesota, had made social media posts noting their participation in the Capitol riot in the days following the attack. They admitted guilt in a video hearing Tuesday before District of Columbia Judge Dabney Friedrich.

In a Facebook post the day after the attack, Daryl Johnson stated, “Mark my words Yesterday will be the beginning of the revolution.” He also made comments about “some version of a civil war” and commented in another post: “Bring it on Biden! I have no problem dying in a pool of empty shell casings.”

The day before the attack, Daniel Johnson posted expletives about Biden. After he left the scene of the attack, he posted, “We stormed capitol hill” and “Lol Dad and I were one of the first ones inside.” He also commented that he was sure House Speaker Nancy Pelosi’s office was trashed. “I was trying to find a way into the chamber,” he wrote. He also posted on Jan. 7: “Trump 2020.”

In the plea agreement signed by both men on Dec. 15, they admitted that at about 2:20 p.m. on Jan. 6, 2021, they unlawfully entered the Capitol by climbing through a broken window next to the Senate wing door. While inside, they climbed a flight of stairs to the second floor and at one point encountered a line of law enforcement officers.

“Along with a group of other rioters, Johnson and his son, Daniel Johnson, rushed the line of law enforcement officers and helped push through the officers and push open the east rotunda doors, allowing rioters outside of the building to enter. Johnson was at or near the front of the group of rioters on the interior of the Capitol when the doors were opened,” the document said.

They remained inside the Capitol and climbed stairs to the third floor before exiting on the first floor after being inside the building for about 26 minutes.

While they face up to five years in prison and a $250,000 fine for the felony, court documents indicate prosecution and defense attorneys agreed a sentence of up to six months and a fine of up to $20,000 is likely. The judge has discretion in sentencing and will consider filings from both sides, including video evidence from prosecutors.

The men agreed the riot caused an estimated $1.5 million in damage to the Capitol, and they each agreed to pay $2,000 in restitution, court documents indicated. They both also agreed to allow law enforcement officers to interview them about the events surrounding the attack.

Sentencing was set for April 12 via video. Both men remain free.

The government agreed to drop other charges, including disorderly conduct, entering a restricted building and demonstrating in a Capitol building.