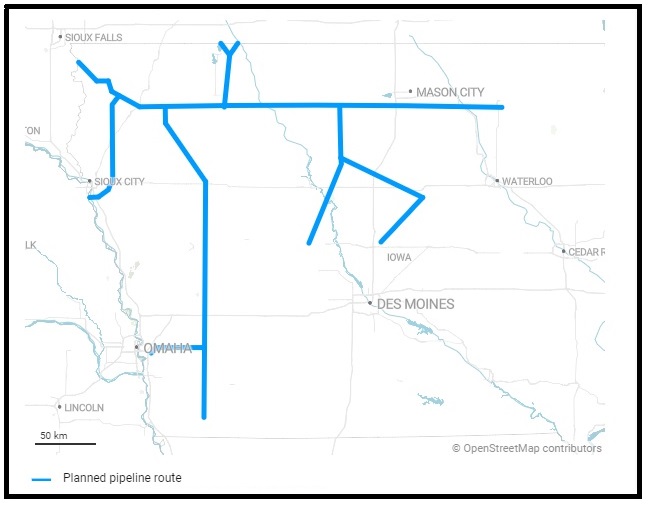 DES MOINES, Iowa (AP) — A company that wants to build a pipeline to carry carbon dioxide from ethanol plants in Iowa and several other states to North Dakota where it would be stored underground is fighting Iowa regulators’ order to reveal the names of business and governments in the path of the $4.5 billion project.

Summit Carbon Solutions has appealed to the Iowa Utilities Board and asked a court to intervene because it says the order would force it to identify many of the individual farmers who own land along the route because the land is often held by trusts or family corporations, according to The Des Moines Register.

Regulators said the names of individual landowners could be kept private, but businesses and governments that own land in the pipeline’s path across 30 Iowa counties would have to be revealed.

“The board should reconsider its order and hold that business entity names and addresses — the vast majority of which belong to small family farm operations — be held confidential,” Summit said in its appeal.

Environmental groups argue that keeping the names secret will only make it harder to organize opposition to the project.

Jess Mazour with the Sierra Club’s Iowa Chapter said Friday the information should be made public so landowners can join forces to protect their interests.

“The minute landowners know they’re not alone, that they don’t have to feel hopeless, that there are things they can do to protect their land, they don’t want to sign” pipeline easements, Mazour said. “And Summit doesn’t want that to happen.”