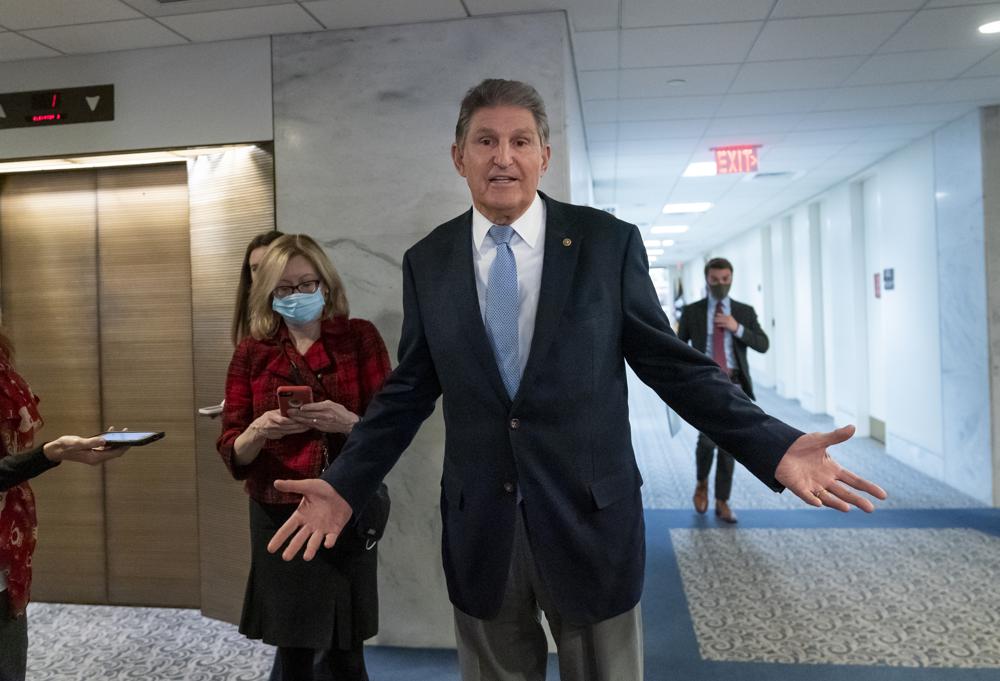 In this Dec. 13, 2021, photo, Sen. Joe Manchin, D-W.Va., leaves his office after speaking with President Joe Biden about his long-stalled domestic agenda, at the Capitol in Washington. Manchin’s reluctance to endorse the Biden administration’s expanded child tax credit program is rippling through his home state of West Virginia. Manchin, a moderate Democrat, is one of the last holdouts delaying passage of President Joe Biden’s massive social and environmental package. (AP Photo/J. Scott Applewhite)

Manchin, a moderate Democrat, is one of the last holdouts delaying passage of President Joe Biden’s massive social and environmental package, dubbed the Build Back Better Act.

The West Virginia senator has expressed concerns over multiple aspects of the roughly 10-year, $2 trillion package, including the continuation of the expanded Child Tax Credit program.

At the same time, Manchin voted this week in favor of the one-year, $768.2 billion defense budget.

The child care expansion, which passed earlier this year as part of pandemic relief legislation, boosted the monthly payments for parents and greatly expanded the scope of those eligible. In West Virginia, one of the country’s poorest states, the effect was immediate, advocates say.

“There is no state that’s more impacted by the CTC,” said Kelly Allen, executive director of the West Virginia Center on Budget and Policy. “West Virginia, frankly, wasn’t doing great before the pandemic. So this is absolutely needed now and in the long term.”

On Dec. 15, CTC payments went out to 181,000 West Virginia families, according to Treasury Department figures. The payments averaged $446 and reached 305,000 children. Those payments could end this month, if the Biden package doesn’t pass in the next few days.

A coalition of West Virginia groups has been lobbying Manchin from the local end, emphasizing the ground-level stories of families who benefitted from the expansion.

“We’re hearing it from every corner of the state,” said Jim McKay of TEAM for West Virginia Children. “This program is really having a profound impact in a positive way.”

“Households across the state would have trouble meeting their basic needs,” Allen said. “There is real urgency right now to make sure families don’t get left short.”

Faced with unified Republican opposition, Biden is trying to pass the package with Democrats alone, which the House has already done. But the path in the evenly split 50-50 Senate is more difficult, with no room for dissent. Biden has been in talks with Manchin, who appears to be the final obstacle for Democrats trying to pass the big bill by Christmas.

The rocky status of the Biden-Manchin talks was described Wednesday by a person who spoke only on condition of anonymity. The person said Manchin was pushing to eliminate the bill’s renewal of expanded benefits under the child tax credit, a keystone of Democratic efforts to reduce child poverty.

Last month, a group of West Virginians gathered outside Manchin’s office in the state capital, Charleston, to present the senator with a quilt covered in personal testimonials from CTC recipients describing how the payments had improved their lives.

“It’s a life-changer,” said Rick Wilson of the American Friends Service Committee who participated in the demonstration. ”People are saying they paid off debt, kept the lights on, or bought or repaired their car so they could go to work.”

Studies suggest the child tax credit expansions are expected to cut child poverty by 40% — with 9 of 10 American children benefiting. All told, some 4.1 million children are on track to be lifted above the poverty line, according to analysis from the Center for Budget and Policy Priorities.

In West Virginia, recipients spent 52% of their CTC money on food, with 39% going toward clothing and other essentials for their children, according to a study by Washington University in St. Louis’ Social Policy Institute.

Allen, of the West Virginia Center on Budget and Policy, said the CTC money doesn’t just benefit the recipient families. With few in a position to save the funds, the cash gets immediately spent in the community. She estimated that more than $530 million in CTC funds had flowed into the West Virginia economy.