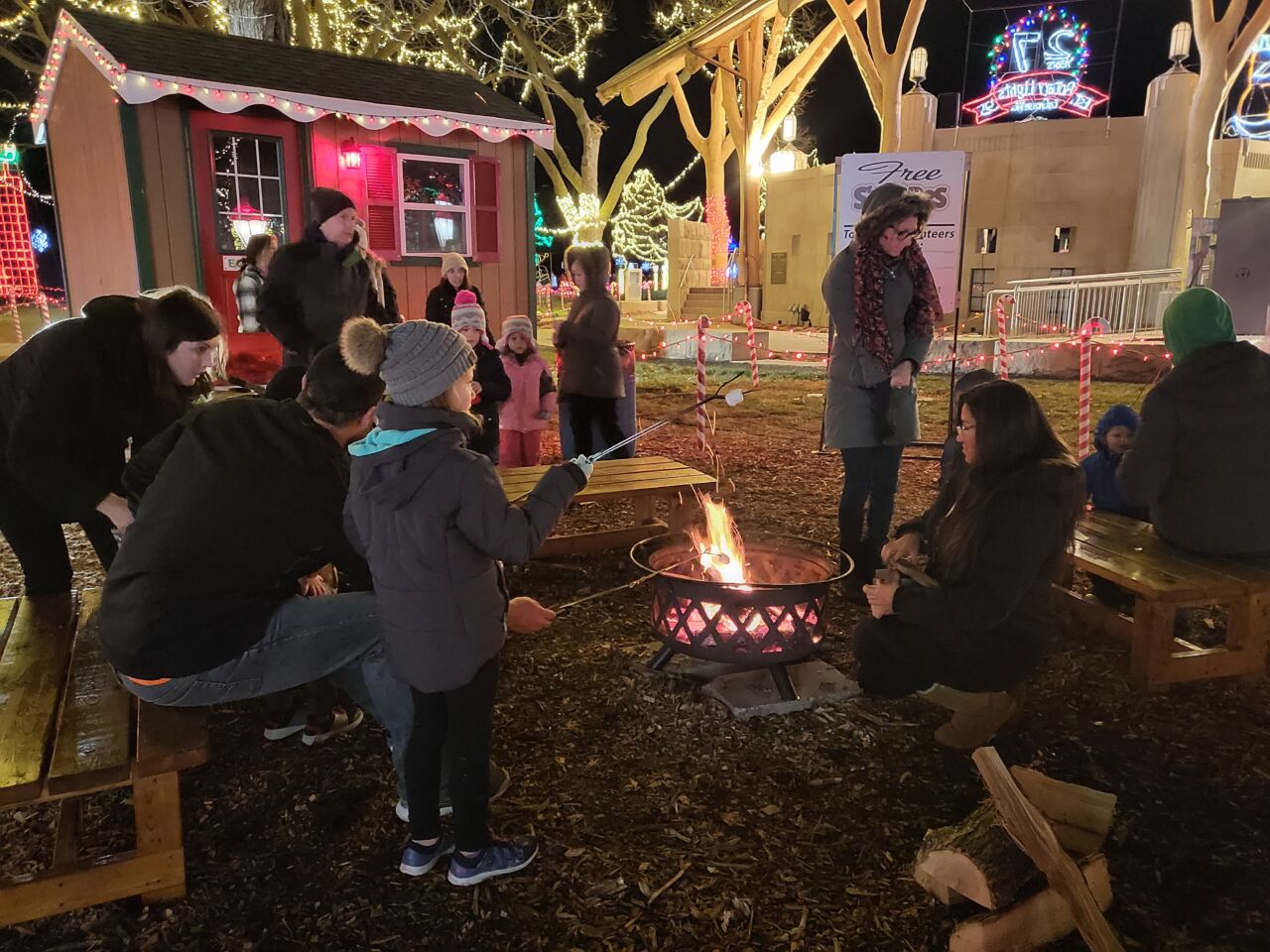 A family roasts marshmallows before stuffing them into a s'mores around a firepit at Rotary Lights in La Crosse's Riverside Park on Dec. 1, 2021 (PHOTO: Rick Solem)

A couple of notable things from talking with Rotary Lights president Pat Stephens this week on La Crosse Talk PM.

First, they’re giving away a lot of s’mores at the fire pits in Riverside Park. The opening weekend saw 4,100 visitors and apparently about half of them ate a s’mores — unless some of you had two.

Stephens said the s’mores assembly line had made about 2,400 more earlier this week.

“That should get us through the week, hopefully,” he said with a laugh, noting that Joe Welch Equipment in Caledonia, is writing the checks for that chocolate, marshmallows and graham crackers.

Second, after 27 years of the holiday lights display that runs until 1 a.m. New Year’s Day at Riverside Park in La Crosse, Stephens has enough volunteers, if you can believe it.

“It’s about 3,200 volunteers that make this possible,” he said. “I’m associated with a lot but there’s nothing quite like Rotary Lights when it comes to community involvement.

“We are blessed. Most years, we even have to turn down some groups that would like to participate. We don’t have enough jobs for them. It’s kind of nice, that feeling.”

Stephens noted that Jan. 1-8, when the wind is cold and the ground is snowy or icy, they can ALWAYS use more help to take down, literally, 3 million lights.

That leads to No. 3: They aren’t even able to use all the lights right now.

“Because there’s 33 less trees in the park than there were two years ago, we actually have lights in storage that we have no place to put,” Stephens said, adding that the Rotary Lights group is planting six trees each year. “Four- to five-inch trees, so they’re not just sticks.

“The first ones went in two weeks ago, and we hope to repeat that each year for a number of years to come.”

Lastly, the parade was back this year, though Stephens would like to do it at 5 p.m. instead of an hour later. The parade goes down Main Street and, despite the conundrum that might have on traffic for 30 minutes, Stephens said there’s a reason it takes that route.

“When we had our first Rotary Lights Parade, there was not much happening — if you can think 27 years ago — there was not much happening at downtown La Crosse,” Stephens said. “So, they approached us and we had conversations about bringing a parade to the area and wanted it to go right down Main Street to help the merchants and help the downtown folks. Ever since then, we’ve done it that way.”

There are carriage rides ever weekend. Hay rides on Tuesdays. In a couple of weeks — Dec. 16-19 — there will be helicopter rides. Stephens said the $49 trip is about 10 minutes. According to the site, it’s two miles. There’s also a 5-mile, $79 option.

Here’s a pretty good rundown of the schedule, though the site has other places to navigate for things going on — like an ice rink if it ever freezes in Wisconsin in December.

Different musical performances take place most nights. Santa is there to talk to the kids.

All that’s asked from visitors is to bring a food donation — or cash. There are drop boxes at the entrances and exits for both.

If you’re driving in, you have to enter the park from the north on Second Street.