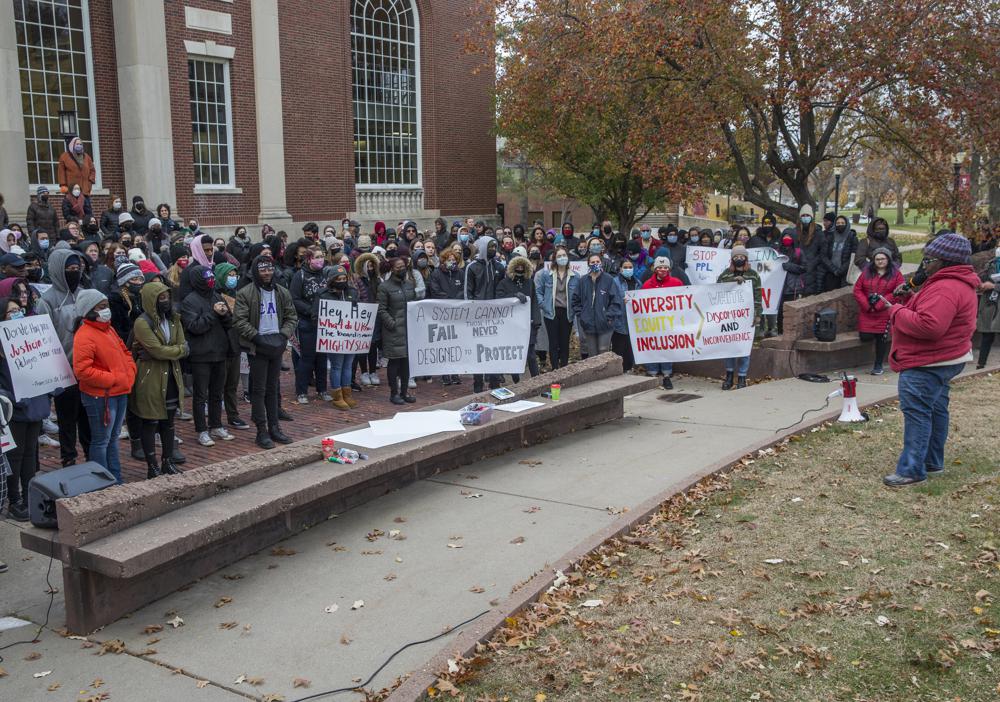 A Coe College faculty member speaks about her experiences as a queer black individual at the private college and the changes they would like to see happen within their workplace for staff and students at the college in Cedar Rapids, Iowa, on Thursday, Nov. 18, 2021. (Savannah Blake/The Gazette via AP)

Darryl Banks, a 1972 graduate who served on its Board of Trustees for four decades, submitted his resignation last month after the board named David Hayes as 16th president of Coe, a private liberal arts school in Cedar Rapids.

In his resignation letter, Banks described an Oct. 1 board meeting in which he articulated “diversity and inclusion concerns” about the search committee’s deliberations. He wrote that another trustee accused him of lying and that board leaders later called him dishonest after he complained the incident, which he called an “assault on my character.”

“Unfortunately, these actions are a clear indication that the Board leadership does not have the will for frank discussions regarding diversity and inclusion or the capacity to advance a meaningful commitment to social and racial justice, diversity, equity and inclusion,” Banks wrote.

The board picked Hayes, a white man who had served as interim president, as its next president following a search that included two other male finalists and dozens of applicants. Banks and dissenting trustees were disappointed that other candidates didn’t advance.

Banks is the last Rhodes Scholar from Coe, and went on to a career in environmental policy. Now of Potomac, Maryland, he pushed the school to be a national leader in racial equality, writing that “nothing has made me prouder than trying to make Coe a more diverse and inclusive college community.”

Another trustee, Minnesota lawyer Alan Anderson, resigned Oct. 28, citing how Banks was treated and echoing concerns about the search process.

“I have never witnessed such uncivil, uncalled for, and reprehensible conduct during my time on the board,” he wrote, recalling that Banks was called a “bald-faced liar.”

Anderson wrote that the search process “was neither fair nor open” and favored Hayes once members picked him over others to be interim president. He said the committee failed to attract a diverse pool of finalists and forwarded Hayes over more qualified individuals.

Student leaders planned to hold a protest Thursday to demand that the school apologize to Banks, make changes to the board’s makeup, and hire a diversity, equity and inclusion director.

“We refuse to allow the Board to sweep this under the rug as a simple misunderstanding, a tactic used all too often to diminish the voices and concerns of marginalized individuals,” the Student Senate wrote in a note to students.

Joining calls for change were the Black Alumni Association and many faculty and staff on campus.

Board of Trustees Chairman Carson Veach said in a campus note that a trustee used sharp language with Banks, whose assertions were “not consistent with the view of the search process held by the other six Trustee members on the search committee.” He said the trustee apologized for his language but stands by his opinion.

Trustees urged Banks not to resign, “regret his resignation and the circumstances that led to it,” and appreciate his decades of service and leadership on diversity, Veach wrote.

Veach announced that the board had adopted a new code of conduct for trustees and is reviewing whether to add students and faculty to the board.

He defended the search, saying that “every effort was made to construct a diverse pool” and that one of the five semifinalists was a person of color. He said the trustees stand behind the selection of Hayes, a former vice president for advancement and Coe’s first alumnus to serve as president.

“No selection process is perfect, but it was determined, after extensive review, that our process was thorough and fair, and the outcome was legitimate,” Veach wrote.