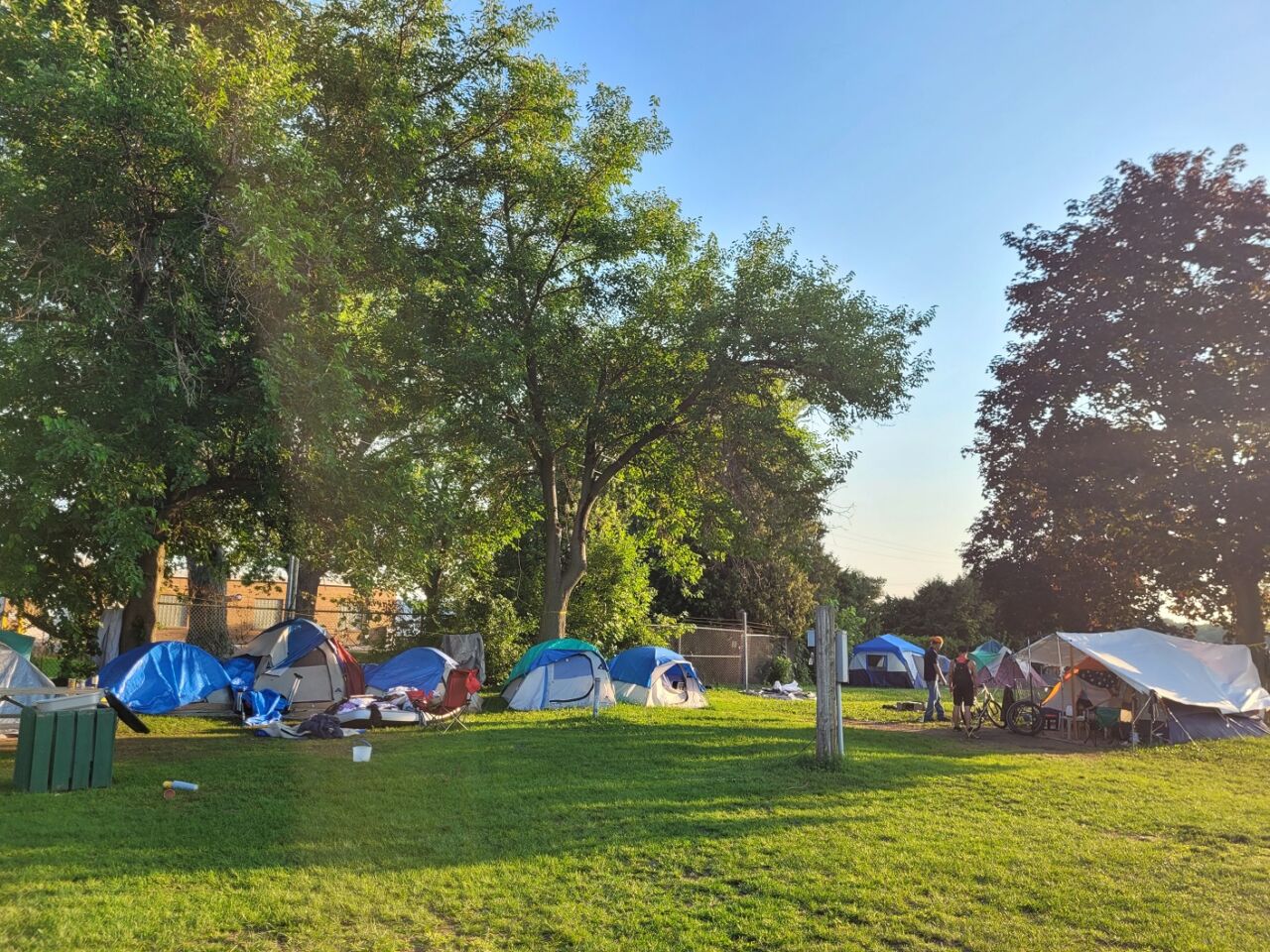 FILE - Tents are set up all around Houska Park on an August 2021 evening, where at that time about 70 of La Crosse's 90-100 homeless are camping. (PHOTO: Rick Solem)

A forgotten portion of our society and a failure from leaders to support them.

La Crosse Mayor Mitch Reynolds did some venting on WIZM this week about the dilemma for those without homes, or about to lose their homes, and how it’s being ignored elsewhere or being pawned off, as if these aren’t people.

He called it a crisis level of the unsheltered population, that’s higher now, than it’s been in La Crosse for years.

“Surrounding counties, surrounding communities will pile people in cars and take them to La Crosse and drop them off at shelters because they don’t have the resources to do anything else,” Reynolds said on La Crosse Talk PM. “And this has been going on for years and still goes on.

“We have these outlying counties and communities that don’t have those resources and feel like it’s better for them, a better strategy, to just ship people out and hope for the best.”

The first-term mayor didn’t necessarily put the blame on those communities but one story — one person — the city has to now help, did stand out.

“You know, we had a situation where we had a city in Sauk County, whose police department drove a woman to Wisconsin Dells, and put her on a train with a one-way train ticket (to La Crosse),” Reynolds said. “She was facing severe mental health crisis issues, and they’re just basically like, ‘Yeah, well it’s not our problem anymore. Stop off in La Crosse. Good luck.’”

“You know, we had a situation where we had a city in Sauk County, whose police department drove a woman to Wisconsin Dells, and put her on a train with a one-way train ticket (to La Crosse),” Reynolds said. “She was facing severe mental health crisis issues, and they’re just basically like, ‘Yeah, well it’s not our problem anymore. Stop off in La Crosse. Good luck.’”

As the temperature drops, the La Crosse city council Thursday will take steps to house the growing unsheltered population by approving $700,000 in American Rescue Plan Act funding to rent space. There are some other long-term solutions on the agenda, as well, including an affordable-housing project.

And while Reynolds says they’re working on long-term strategies, he feels bad for the growing issue that he campaigned on to try and alleviate.

“You know, we think about those 120-130 people that are chronically homeless and then, I don’t know how many, a couple hundred, 300 others, that are close to that — not chronically, but can be homeless at any given time or maybe it’s more than that,” Reynolds said. “When you think about, ‘How does it feel?’ When you go downtown, you see people in Cameron Park in tents or sleeping on the benches and things. What does that feel like as a community? It feels like we’re failing.”

Reynolds has blamed himself to an extent over the past few weeks in how slowly the city has moved in trying to get help. But those with more power seem to be ignoring the problem completely.

“It’s just embarrassing how little state government apparently cares about homelessness in the state of Wisconsin,” Reynolds said. “We’re going to keep helping. I wish there was a more of a statewide solution and there’s not because of the lack of leadership in our state legislature right now.”

While the Republican-led Wisconsin state Legislature focuses on how it can hunt sandhill cranes or ban words in school, deeming them “Critical Race Theory,” Reynolds feels they need to step up.

“The last time I saw a bill that came through that addressed homelessness, it was basically to make homelessness illegal,” Reynolds said.

There will no doubt be politicians celebrating and thanking veterans on Thursday, Veterans Day, all over social media, stopping at VFWs to take the coveted pictures, perhaps the focus should be on what solutions they’re working on to address veterans’ issues.

“Talk about veterans, and how we need to support veterans and how important veterans are, but we can point to significant failures by our federal government, our state government and then all the rest of us, for actually caring for our veterans,” Reynolds said. “There should not be people over there (at places like Houska Park). These should be people that we have sworn to support after serving their duties to the United States of America and we, frankly, are not doing a good job at that.”

Listening to local experts who help people in their most desperate of situations, Reynolds said they’re seeing an unsheltered population now that is twice as big as it’s been in many years. He said the priority needs to be in helping them because that helps everyone.

“We need to address those populations as an expression of who we are as human beings and who we are as a community,” he said, “but also because there’s very real impacts that happen socially and economically from having an enormous population of people that are living unsheltered in our community.”