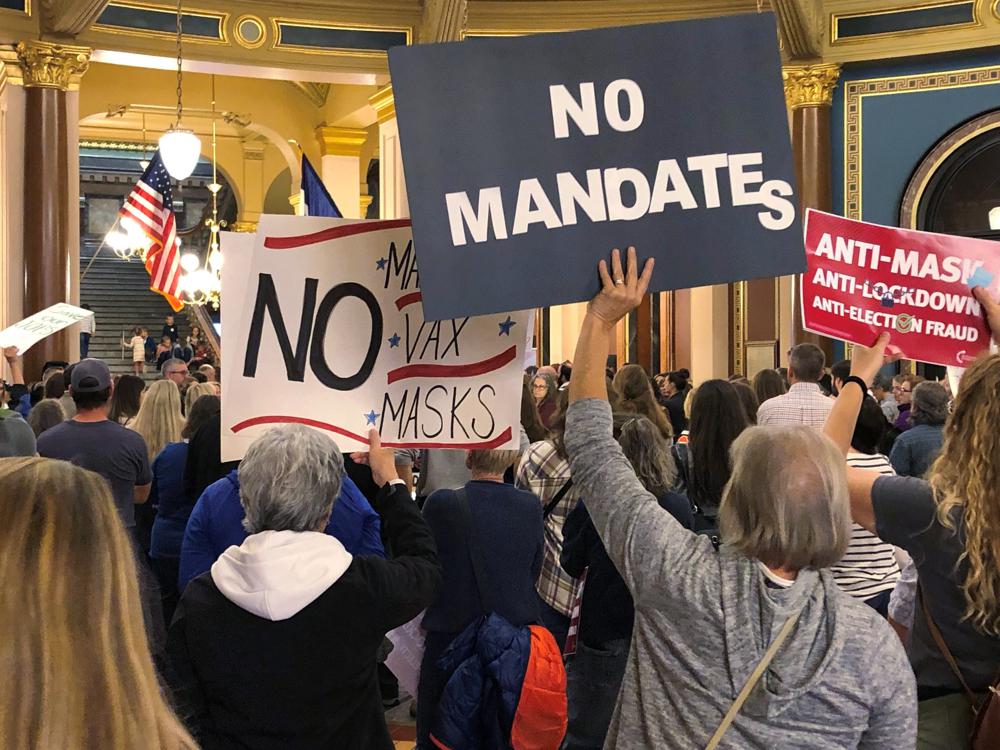 Protesters gather at the Iowa Capitol in Des Moines, Iowa, on Thursday Oct. 28, 2021, to push the Iowa Legislature to pass a bill that would prohibit vaccine mandates from being imposed on employees in Iowa. Informed Choice Iowa, a group opposing vaccine and mask mandates, held the rally as lawmakers convened a special session of the legislature and unveiled a bill that provides for vaccine mandate exemptions and required unemployment benefits for workers forced out of a job for refusing a vaccine. (AP Photo/David Pitt)

DES MOINES, Iowa (AP) — Iowa employees could seek medical and religious exemptions from COVID-19 vaccine mandates and those who are fired for refusing a vaccine would be guaranteed unemployment benefits under a bill approved Thursday by the Iowa Legislature.

The bill was released just minutes before lawmakers met for a special session convened to address redistricting.

Iowa Gov. Kim Reynolds has called for legislative action on vaccine mandates. She has opposed government requirements for masks and vaccines even as COVID-19 has killed nearly 7,000 people in Iowa and medical science has shown both tools to be effective in reducing the virus spread.

Reynolds said in a statement after the bill passed that she planned to sign it, calling it “a major step forward in protecting Iowans’ freedoms and their abilities to make healthcare decisions based on what’s best for themselves and their families.”

More than 100 people opposing vaccination requirements rallied at the Capitol to push for stronger language and lobbyists for the business community said the bill as drafted puts business owners in conflict between complying with federal directives or state law.

“It’s a terrible position for businesses to be put in and it doesn’t solve the problem you’re trying to solve,” said J.D. Davis, the vice president of public policy for the Iowa Association of Business and Industry during public comments in a committee hearing on the bill.

Businesses also were concerned about increased unemployment costs if thousands of workers become eligible due to refusing a vaccine and losing their jobs.

Democratic Rep. Mary Mascher noted the thousands killed by the coronavirus in Iowa, many in nursing homes and facilities where unvaccinated workers carried the virus inside.

“We’re not trying to hurt anybody. We’re trying to save lives and the medical community has been helping us with those efforts,” she said.

Rep. Bobby Kaufmann defended the bill, saying it will help people in his district and “people won’t get fired Monday because of the bill period, so for them I want this bill to pass.”