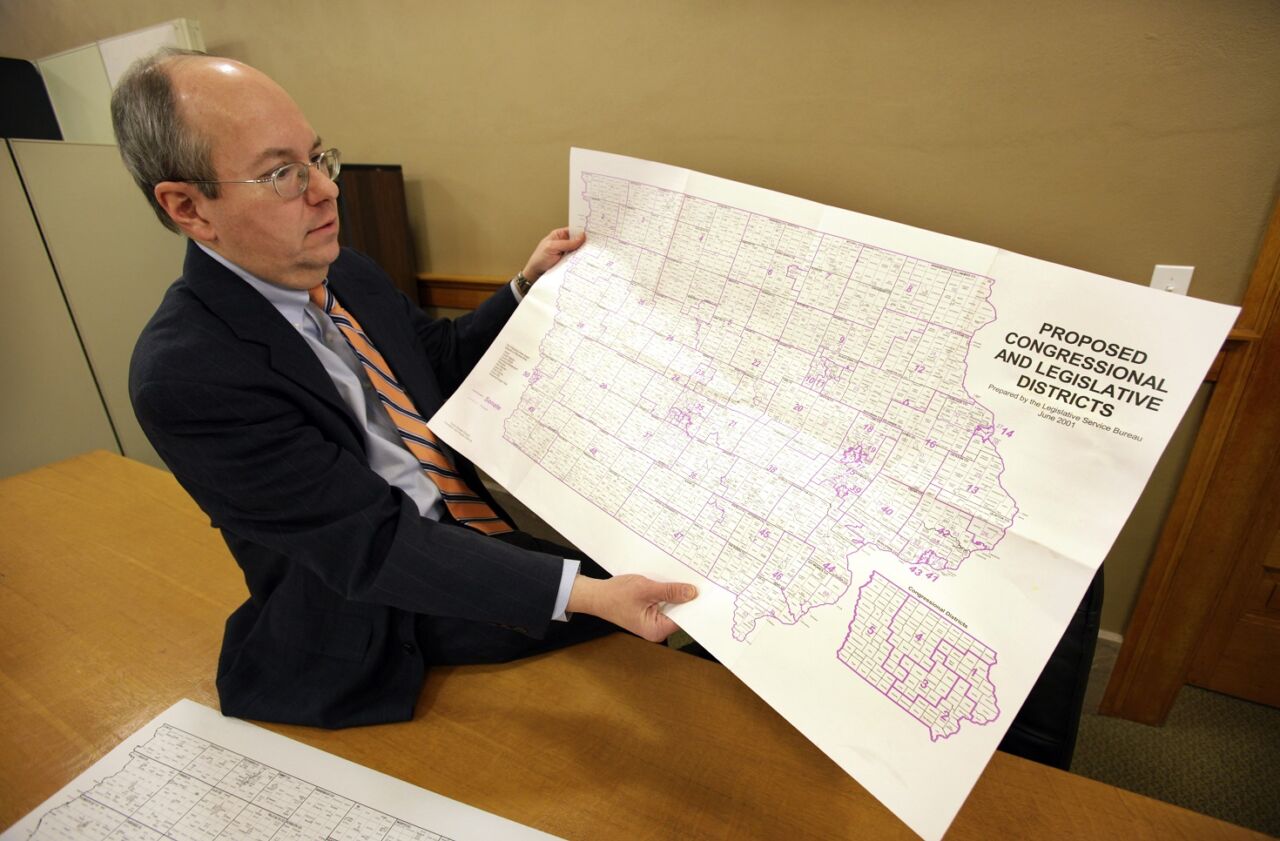 FILE - In this Feb. 9, 2011 photo, Ed Cook, legal counsel for the Iowa Legislative Services Agency, holds a map of Iowa that will be used to help in drawing new congressional district lines, in Des Moines, Iowa. The once-a-decade process of redistricting is a bare-knuckles display of politics as incumbents seek to protect their districts and parties scramble for any advantage - except in Iowa where three nonpartisan staffers redraw the lines, focused solely on making districts compact and equal in population. (AP Photo/Charlie Neibergall)

The proposal from Iowa’s nonpartisan Legislative Services Agency also would keep the Democratic counties of Johnson and Linn in separate districts, unlike a previous plan rejected by Republicans this month.

Under the new plan, each of Iowa’s four congressional districts would have favored Republican Donald Trump in the 2020 election over Democrat Joe Biden. That’s a switch from the first set of maps that created two districts with strong Republican majorities, one that favored Democrats and one that was nearly equal.

The Iowa Legislature is scheduled to meet in special session next Thursday to consider the maps.

The Iowa Senate on Oct. 5 rejected the first set of redistricting maps on a party-line vote, with all 32 Republicans voting no and the 18 Democrats voting yes.

By state law, the Legislative Services Agency is responsible for following detailed guidelines to ensure population balance among Iowa’s congressional districts and to prevent political influence in the initial drafting of changes. The Legislature can only accept or reject the first and second set of maps without amendment.

The agency noted in its second drawing of maps that the Senate’s resolution rejecting the first plan and ordering LSA to submit a map that better balances compactness with population deviation would violate state law and the Iowa Constitution, which place a higher priority on population equality.

If the second set of maps is rejected, the LSA will have 35 days to draw a third set, which could be amended with majority Republicans leading that process. The Iowa Supreme Court has given lawmakers until Dec. 1 to approve the new maps.

Democrats have expressed concern Republicans may amend the third set, as the law allows, to give the GOP a partisan benefit. It would be the first time lawmakers reworked maps themselves rather than taking an LSA plan.