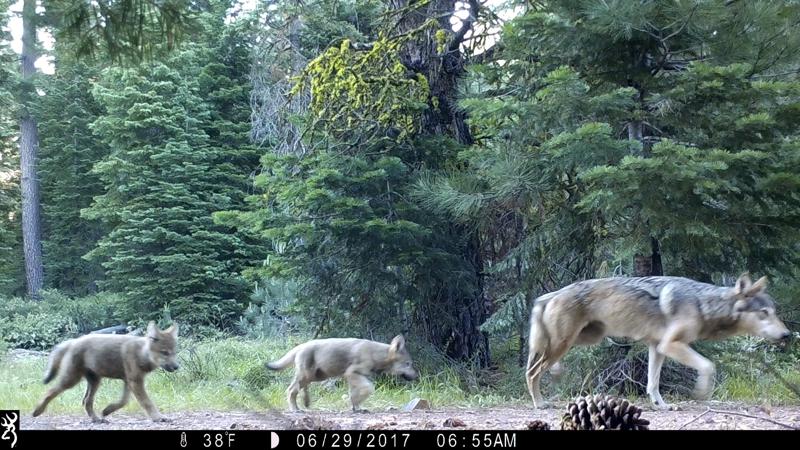 FILE - This June 29, 2017, remote camera image provided by the U.S. Forest Service shows a female gray wolf and two of the three pups born in 2017 in the wilds of Lassen National Forest in northern California. Gray wolves, among the first species protected under the Endangered Species Act in 1973, were reintroduced to Yellowstone National Park in 1995. But in other regions of the U.S., gray wolves have dispersed naturally; the population in the lower 48 states now totals about 5,500. (U.S. Forest Service via AP, File)

MADISON, Wis. (AP) — A judge appeared on the verge Thursday of granting wildlife advocates’ request to halt the Wisconsin fall wolf season after hearing arguments that the hunt is illegal.

The judge said that following the rule-making process is crucial to protecting against state agencies seizing too much power from the Legislature. He pointed out that the state Supreme Court earlier this year struck down Gov. Tony Evers’ statewide mask mandate, a stay-at-home order and gathering limits, with the high court saying the administration acted via executive order rather than through the rules.

“(The wolf rules have) just gone for years and years without oversight and review,” Frost said. “It’s a big deal. It’s a significant thing.”

Frost said he planned to issue an oral ruling Friday afternoon after taking a final round of briefs from the wildlife groups and state attorneys. Hannah Jurss, a state Justice Department attorney defending the season structure, seemed resigned that Frost would stop the hunt, asking him that if he does issue an injunction that he stay the order pending an appellate ruling.

Hunters, farmers and conservationists have been quarreling for years over how to handle wolves in Wisconsin. Farmers say the animals are destroying their livestock and hunting is the only way to control them. Conservationists counter that the population isn’t large enough to support hunting.

The state held three fall wolf seasons in 2012, 2013 and 2014 before a federal judge placed the animal back on the endangered species list. The Trump administration removed them from the list last year. The decision became final in January.

A Kansas-based hunting group, Hunter Nation, won a court order forcing the DNR to hold a hunt in February. The group argued that the Biden administration could place wolves back on the endangered species list at any moment, denying hunters their sport.

The DNR scrambled to put together a season. Hunters ended up blowing past their 119-wolf kill quota, killing 218 wolves in just four days. The DNR’s latest estimates put the wolf population at about 1,000 animals.

Conservationists responded to the February kill totals by demanding the DNR cancel the fall season, saying the effects of two seasons in one year on the wolf population would be devastating and could result in the federal government placing the animal back on the endangered species list.

Conservatives on the DNR’s policy board in August decided to go ahead with the fall hunt regardless, setting the kill quota at 300 wolves, which prompted the wildlife advocacy groups to sue to block the hunt. Six Chippewa tribes have filed a similar lawsuit in federal court. A hearing in that case is set for Oct. 29.

The DNR earlier this month took the unprecedented step of unilaterally reducing the quota to 130 wolves, openly defying the board.

The Chippewa have claimed 56 of those animals per treaty rights that allow them to claim 50% of quotas in northern Wisconsin’s ceded territory, land the tribes gave the government in the 1800s. The Chippewa consider the wolf sacred and refuse to hunt it, which means that if the season happens the working quota for state-licensed hunters will be 74 wolves.

CORRECTION: ) In an Oct. 21 story about a Wisconsin judge hearing arguments over whether to block a fall wolf hunt, The Associated Press erroneously reported the year that then-Gov. Scott Walker signed a law authorizing an annual wolf hunting season and the year that the first subsequent hunt happened. Both happened in 2012, not 2011.