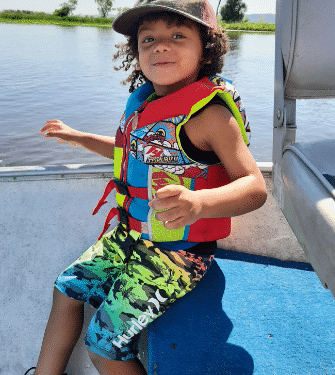 Police around Wisconsin have searched throughout the weekend for a missing child who was seen in La Crosse a week ago.

A statewide Amber Alert has been issued for 3-year-old Major P. Harris. The boy’s mother, 25-year-old Mallery Muenzenberger of Onalaska was found dead in Milwaukee on Friday, apparently murdered.

Police suspected 20-year-old Jaheem Clark of killing Muenzenberger, and thought he might be traveling with the child.

On Sunday, Clark reportedly shot and killed himself in another Milwaukee house while police were outside.  There is still no sign of Major, and Milwaukee police are still looking for him.

Anyone with information on the missing boy is asked to contact the Milwaukee Police Department.

On Sunday evening, an Amber Alert update said Clark had been found. About 15 minutes after police arrived at the Milwaukee home where Clark was, police heard two gunshots from inside. Police went inside and found Clark with an “apparent self-inflicted gunshot wound,” police said. He was pronounced dead and the medical examiner ruled it a suicide.

In one report, police listed the home where Muenzenberger was found as Major’s last known location, the Milwaukee Journal Sentinel reported. In another, authorities said he was last seen Oct. 9 on the way from La Crosse to Milwaukee.

On Monday, the vehicle that Clark was driving was found in Milwaukee and police said they were actively canvassing the area in an effort to find the boy. Several local, state and federal agencies were helping with the search.

Anyone with information was asked to call Milwaukee police.