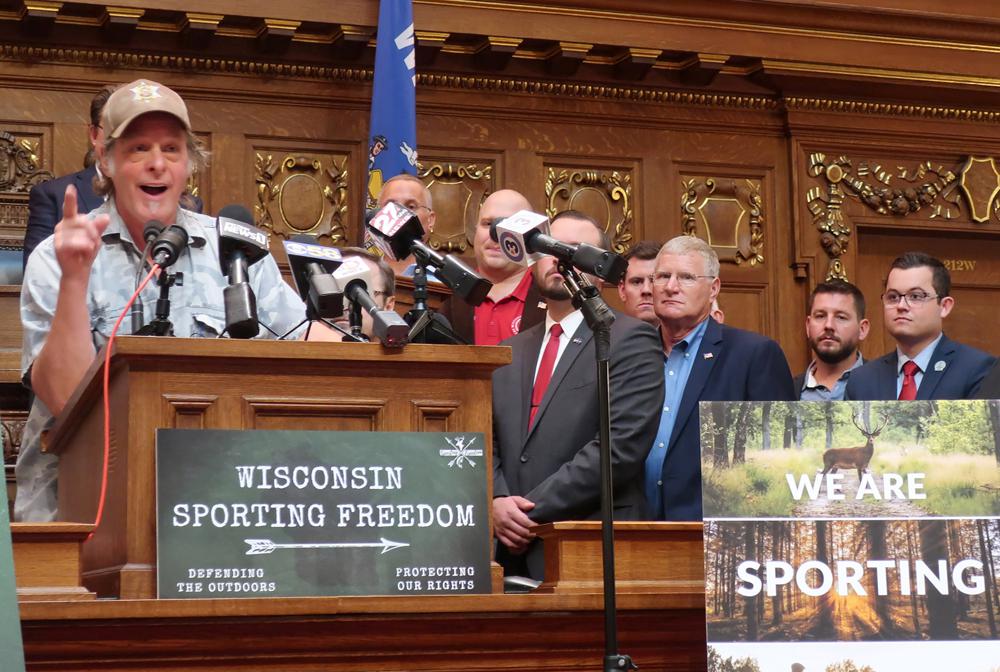 Rocker Ted Nugent joined with more than 20 Wisconsin Republican lawmakers in advocating for a package of hunting bills that would, among other things, create a sandhill crane hunting season and allow for concealed weapons to be carried without a permit, on Wednesday, Oct. 13, 2021, in the Wisconsin state Assembly chamber in Madison, Wis. (AP Photo/Scott Bauer)

MADISON, Wis. (AP) — Wisconsin Republicans brought in rocker and avid hunter Ted Nugent on Wednesday to publicize a package of bills that would declare open hunting season on sandhill cranes and allow anyone age 18 or older to carry concealed firearms without a permit.

Nugent appeared with more than 20 Republican lawmakers, including Senate Majority Leader Devin LeMahieu, inside the Assembly chamber. The musician and conservative activist said that “hunting is essential and any regulation that doesn’t deal with safety or science-based wildlife management is an obstacle to participation.”

The Wisconsin package of 13 bills is making its way through the Republican-controlled Legislature. Even if they passed, to become law they would need the approval of Democratic Gov. Tony Evers, who would likely veto many of them. Evers’ spokeswoman didn’t immediately respond to a message seeking comment.

Nugent, who lives in neighboring Michigan, is the national spokesman for Hunter Nation, a group that won a court order forcing an unprecedented late-winter wolf hunt in Wisconsin.

The hunt, held during the animal’s breeding season in February that blew by the state’s quota in just four days, outraged conservationists and sparked calls for the state Department of Natural Resources to cancel the upcoming fall wolf hunt.

Nugent has long lobbied for hunting-related measures, including bills in Michigan that would reverse a ban on deer and elk baiting in that state.

One of the Wisconsin bills would create a sandhill crane hunting season. Former Republican state Rep. Joel Kleefisch introduced a similar bill in 2012, arguing that the birds devour farmers’ corn seeds and fledgling stalks. The bill met with intense opposition from bird lovers — Wisconsin is home to the International Crane Foundation — and the proposal died.

Felzkowski, who is sponsoring the bill this year, said the sandhill crane population is flourishing in Wisconsin.

Nugent said in addition to population control, sandhills are tasty. “Are you familiar with the term ribeye?” Nugent said. “They’re ribeyes in the sky.”

State Rep. Nick Milory, one of the Democratic co-chairs of the Legislature’s sportsmen’s caucus, said he was upset that Republicans drafted the bills unilaterally.

“It’s imperative that we continue to work towards ensuring our state’s pristine beauty and sporting heritage for future generations,” Milroy said in a statement. “But we need to do it in an inclusive, bipartisan manner. Wisconsin voters deserve better than the current partisan practices of the majority party.”

Another bill would allow hunters to go after non-native bovids such as buffalo, antelopes and wildebeests. The Republicans say many such animals are already being raised on Wisconsin game farms.

Another piece of the package would require the DNR to eliminate three administrative rules for every one it proposes. Republicans have long accused the agency of draconian regulations.

And yet another proposal would allow residents of the state to carry concealed weapons without a permit, whether they are hunting or not. Republicans have been pushing to do away with concealed carry permits for years. It was last proposed in the 2017 session, but it died without ever getting a hearing.

“We’re here to empower law-abiding gun owners to give them the rights to enact their freedoms that are given to them under the Constitution,” said the bill’s sponsor, state Sen. Mary Felzkowski, of Irma.

Evers, a Democrat who supports restricting access to guns, would almost certainly veto the measure should the Legislature pass it.

Nugent, famous for his 1977 song “Cat Scratch Fever,” is a vocal supporter of former President Donald Trump and a purveyor of false information about the coronavirus pandemic. He called it a scam and opposes health restrictions. Nugent tested positive for COVID-19 earlier this year and posted a video where he used racial slurs to refer to the virus while saying he got so sick with it he thought he was going to die.

Neither the 73-year-old Nugent, nor any of the Republican lawmakers or other participants wore masks during the news conference.