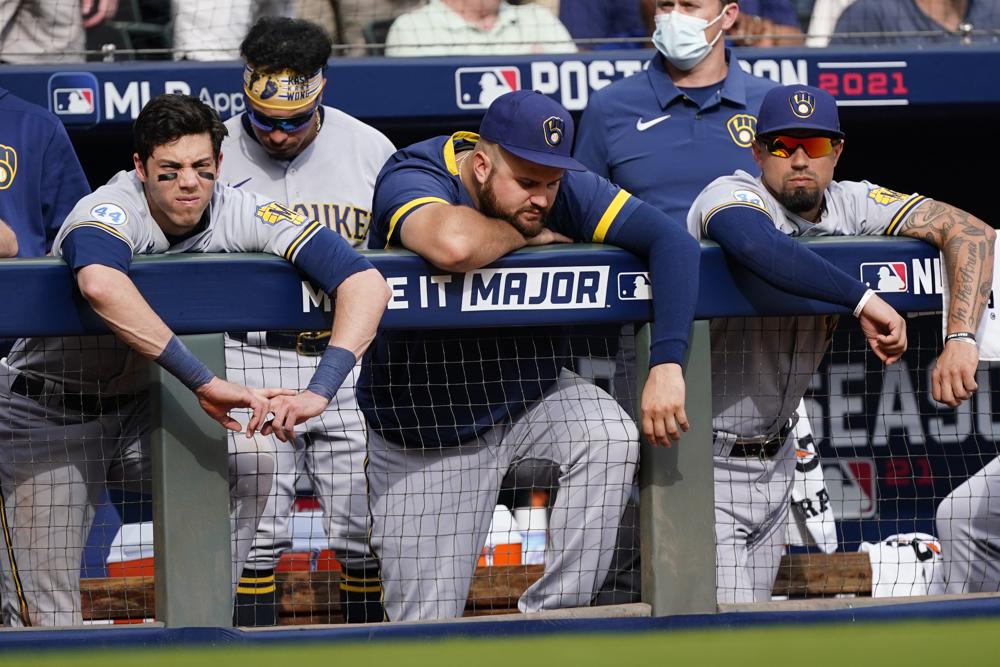 ATLANTA (AP) — Christian Yelich lined a scorcher up the middle.

But Dansby Swanson gobbled it up, sprinted to second base to get the force, then fired on to first to complete the double play.

Another chance squandered by the Milwaukee Brewers, who have picked the worst time of year to go ice cold at the plate.

Ian Anderson and four Atlanta relievers blanked the Brewers for the second straight game in the NL Division Series, pushing Milwaukee to the brink of elimination with a 3-0 victory Monday.

“We’ve got to catch a break,” manager Craig Counsell said, clearly exasperated at his team’s offensive woes and 2-1 deficit.

How futile have the Brewers been with a bat in their hands?

Let us count the ways:

— They have scored just two runs in three games, their entire offensive production boiling down to one swing in Game 1. Rowdy Tellez hit a two-run homer off Charlie Morton to give the Brewers a 2-1 win.

They haven’t scored since.

— Milwaukee has gone 19 straight innings without pushing a run across the plate. More problematic, they’ve failed to score in 25 of 26 innings during the first three games.

— The Brewers are 0 for 16 with runners in scoring position, including eight more fruitless at-bats in Game 3.

“It felt like we’ve had men on base almost every inning,” Omar Narváez said.

Milwaukee had plenty of chances to score Monday, most notably in the crucial fifth inning when the Brewers put runners at second and third with no outs.

After Lorenzo Cain grounded out to Swanson against a drawn-in infield, the runners forced to hold, Counsell had little choice except to send up a pinch-hitter for starting pitcher Freddy Peralta.

The move backfired on multiple levels.

Daniel Vogelbach failed to dive home the run, grounding one to third that left Luis Urias in a rundown. After he was tagged out, Kolten Wong lined out to end the threat.

In the bottom half of the fifth, the Brewers called in Adrian Houser from the bullpen. He immediately gave up back-to-back singles to Travis d’Arnaud and Swanson, which prompted Braves manager Brian Snitker to go to his bench.

Batting for Anderson, Joc Peterson got hold of a high fastball and sent it soaring toward the Chop House restaurant in right field for a three-run homer that accounted for every bit of offense on this warm, sunny afternoon.

The Brewers had one more prime chance to break through in the eighth. Jace Peterson led off with a walk and hustled around to third on Willy Adames’ one-out single.

Yelich got hold of one from Luke Jackson, but the Braves had him played perfectly.

Swanson fielded the hard-hit ball and passed on a chance to flip it to second baseman Ozzie Albies, who hopped out of the way to let his shortstop handle it all by himself for the inning-ending double play.

Will Smith finished off the Brewers with a 1-2-3 ninth, giving the Atlanta bullpen a total of nine scoreless innings in the series.

But it’s the Braves’ starters who have really been on point.

Morton, Game 2 winner Max Fried and Anderson have worked a total of 17 innings, allowing just nine hits and two runs with one walk and 24 strikeouts.

“It’s incredible,” Joc Peterson said. “The only one to give up any runs is Charlie, and I honestly think he was the most dominant one.”

Counsell said the Brewers must find a way to put more pressure on the Atlanta starters the first time through the order.

If not, the postseason will be a short one for Milwaukee. The Braves can wrap up the best-of-five series with one more win Tuesday.

“They’ve had some really good starting pitching,” Counsell said. “They’ve made it tough on us.”