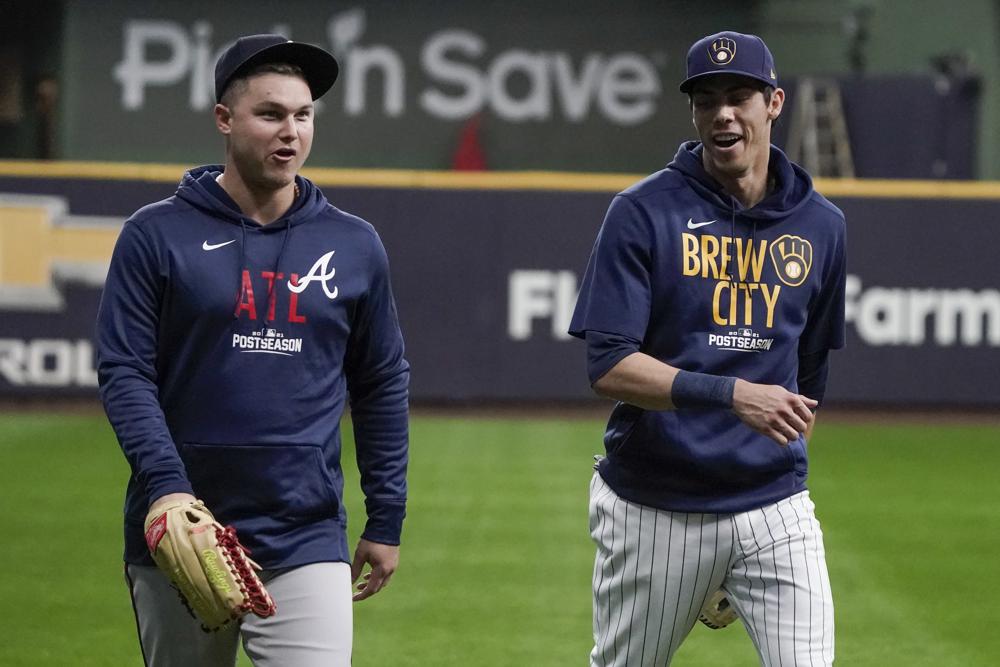 Milwaukee Brewers' Christian Yelich talks to Atlanta Braves' Joc Pederson at a practice for the Game 1 of the NLDS baseball game Thursday, Oct. 7, 2021, in Milwaukee. The Braves plays the Milwaukee Brewers in Game 1 on Friday, Oct. 8, 2021. (AP Photo/Morry Gash)

Then star outfielder Ronald Acuña Jr. tore the ACL in his right knee, and it fell on the front office to get underwhelming Atlanta the help it needed.

The Braves hadn’t been above .500 all season when general manager Alex Anthopoulos essentially acquired an entirely new outfield at the trade deadline. Those moves helped Atlanta surge to another NL East crown and a Division Series matchup starting Friday with the NL Central champion Milwaukee Brewers, who benefited from their own roster adjustments.

“Getting those pieces kind of just gave us that boost of energy to make it,” said Freeman, the Braves’ All-Star first baseman and 2020 NL MVP.

Whether it was Jorge Soler, Adam Duvall and Joc Pederson to the Braves, or Willy Adames to Milwaukee, both clubs had to shake up their fortunes by changing the lineups in order to punch a fourth consecutive playoff ticket.

“Both teams have made additions that have helped their respective teams,” Brewers president of baseball operations David Stearns said. “We started a little bit earlier than most teams in making some of those decisions and some of those acquisitions.”

Milwaukee was below .500 when it acquired shortstop Adames from the Tampa Bay Rays on May 21. The Brewers went 74-44 after his arrival. Adames batted .285 with 20 home runs, 58 RBIs and an .886 OPS, leading the team with 3.9 wins above replacement, per FanGraphs, despite playing just 99 games after the trade.

“I don’t think I did anything crazy or anything special,” Adames said. “I just come to the field every day just to play the game the right way, just to have fun and enjoy this because this is what we live for.”

Rowdy Tellez came over from Toronto and provided the Brewers stability at first base. Hunter Strickland, designated for assignment by the Los Angeles Angels, became a key part of Milwaukee’s bullpen. Eduardo Escobar arrived just before the trade deadline and is one of the Brewers’ top hitters.

The Braves didn’t seem to have any major holes in the lineup until its entire opening day outfield fell apart. Promising rookie center fielder Cristian Pache struggled and got hurt, left fielder Marcell Ozuna was arrested on assault charges in late May following an altercation with his wife and hasn’t returned, and Acuña suffered a season-ending injury in early July.

“We were just treading water all year, kind of playing .500, couple games under .500 all year,” Freeman recalled.

Duvall and Soler have been especially productive, with Duvall clubbing 16 homers and Soler adding 14 in 55 games each down the stretch.

“We’ve been mixing and matching all year,” Freeman said. “It’s been an absolute grind. I think that’s what’s so special about it this year is because I felt like we’ve been grinding all year, trying to figure it out.”

Burnes will start Game 1 for the Brewers against Braves veteran Charlie Morton (14-6, 3.34).

Burnes gave up five runs over four innings when he last faced the Braves on July 30, though the Brewers still won the game 9-5.

Morton is 7-3 with a 3.38 ERA in 13 career postseason appearances. He pitched 10 2/3 scoreless innings for Tampa Bay in last year’s AL Championship Series.

“It’s nice to know that I’ve been in these spots,” Morton said. “It’s reassuring because the unknown is really what gets you in life.”

The Brewers and Braves have some notable connections, but this marks the first time they’ve faced off in a postseason series.

Hall of Famer Hank Aaron, who died Jan. 22 at the age of 86, played for the Milwaukee Braves from 1954-65 before joining them in Atlanta and hitting his record 715th homer in 1974. The Braves traded Aaron to the Milwaukee Brewers in 1975.

The Brewers are adapting their bullpen to account for the absence of setup man and 2020 NL rookie of the year Devin Williams, who fractured his throwing hand when he punched a wall the night Milwaukee clinched the NL Central title.

Milwaukee does appear to have the edge at closer.

THRIVING AWAY FROM HOME